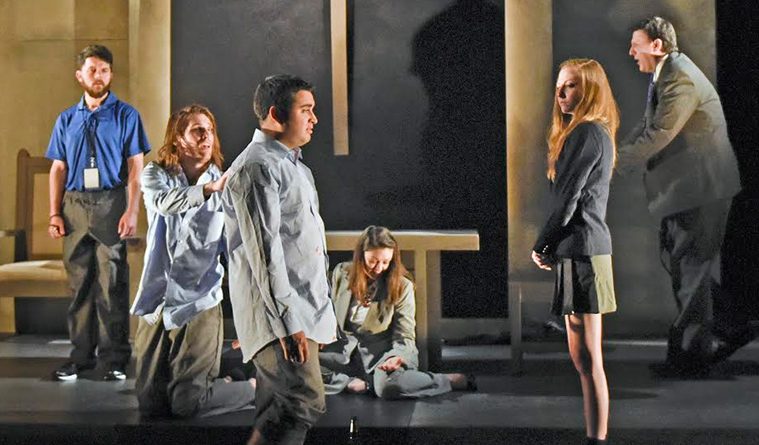 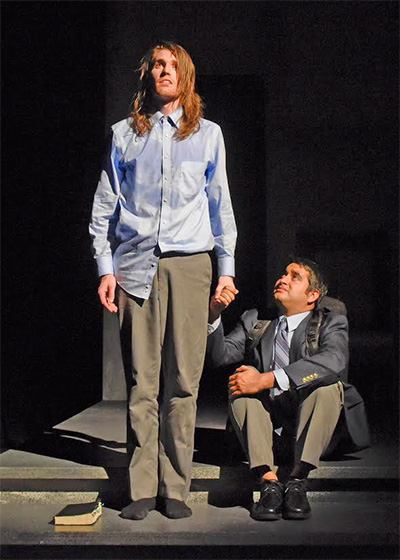 Can an analogy be drawn between the confusion of adolescence (and requisite rebellion) and the turn to religious terrorism?

That’s what Marius Von Mayenberg’sMartyr attempts to do and Second Thought Theatre’s rather conflicted production of said play, on stage through Feb. 6, seems to respond in the negative.

The play opens on Benjamin (Garret Storms); sprawled across an altar-like table reading a Bible. He’s rudely interrupted by his mother, Inge (Lulu Ward), who confronts him about his refusal to go to swim class. The exchange that follows lays the groundwork for the next 90 minutes, a 90 minutes in which Benjamin’s mother, teachers, and friends will each in their own way serve as foils for Benjamin as he acts out the complex connection VonMayenberg is attempting to make between the trials of growing up and religion.

Over the course of the play Benjamin’s character journeys from misunderstood and sympathetic, surrounded by people who refuse to even dignify his turn to religion with a response, “We will deliberately leave out the theological questions,” headmaster Willy Batzler (Thomas Ward) states in the first of several conferences Benjamin will have with his teachers and mother, to an increasingly unhinged Christian extremist, plotting violence and manipulating others insecurities through Biblical text and friendship.

But, as if adolescence and religion, and our fraught relationship with both in the 21st century, wasn’t enough, Von Mayenberg stocks his play with countless additional references to political correctness and contemporary social issues, each of his extremely flawed characters an exemplarof some 21st century hang-up. We have Benjamin’s headmasterwhose character divides his time between objectifying women and representing traditional (read old-fashioned) ideas of teaching creationism and abstinence in schools. Benjamin’s mother, Inge, is oblivious to her child’s feelings and concerns and how she may be effecting them, something encapsulated in hervery 21st century dictum: “The things I do are good for me and don’t hurt anyone else.”

There’s Georg, an endearing and poignant Ruben Carranza, the disabled fellow student who falls victim to Benjamin’s passion and kindness and Lydia, an, as always, excellent Mikaela Krantz, whose aggressive sexuality is the strongest foil for Von Mayenberg’s interesting connection between Benjamin’s extreme turn to Christianity and the fear and confusion which inevitably arise from the growing awareness of sexuality that accompanies puberty.

Then there’s Erika Roth, played here by Allison Pistorius in a confusing albeit spirited performance as the liberal, enlightened teacher whose progressive teaching styles fan Benjamin’s zealotry to extremes. Roth is a complex character whose obsession with throwing Benjamin’s words back in his face reaches an extreme of its own.

It would be a lie to say that watching Second Thought’s cast under the direction of Blake Hackler was anything other than fascinating, he manages to draw out passionate, exciting performances from each of his actors. But Hackler’s direction of the cast in exaggerated, often contradictory performances, and an over-the-top use of religious imagery (a chapel; picture the Rothko Chapel in Houston if you’ve been, a faux baptism and the cross are central elements of the set and stage)seem to be pushing the audience towards a conclusion Van Mayenberg does not really reach in his script, whether intentionally or not; refusing his audience in so doinga real opportunity to grapple with some of Van Mayenberg’s conflicted characters and general sense of irresolution by creating his own.

Benjamin, for example, raises relevant concerns about the current state of Christianity in a conversation withVicar Dieter Menrath, played here by Paul Taylor as a ridiculous, out-of-touch buffoon of a priest, criticizing the watering down of the Bible in much of the Church’s current iterations and questioning the exorbitant amount of space and money the Church seems to require. And the aggressive refusal on multiple occasions of Benjamin’s mother, his headmaster and his teachers to even dignify his religious and educational concerns with a response, is a valid critique of both the wealth of confusion that exists concerning the correct way to parent, teach, and counsel in the 21st century, as well as a warning, in a way, that the leaders of the 21st century, in treating religious extremists like children and refusing to even attempt an understanding of what motivates them, do so at their own risk.

There’s this and much more to grapple with in Martyr, including an interesting digression by Storm’s Benjamin concerning the confusion of life in a society in which all value is relative, but the extreme way in which Hackler directs his cast, maybe especially Storm’s protagonist, and the eye-roll inducing reliance on religious imagery eliminateany semblance of nuance on stage. It’s only after departing the theater and contemplating the action on stage, that it becomes clear the play isn’t, if it was ever actually intended to be, a critique of organized religion or a defense of progressive education, despite being played as such; it’s a flawed play about a flawed, confusing world in which there is no clear answer, and an implicit acknowledgment of how far we have to go in understanding the motivations of extremists of any kind.