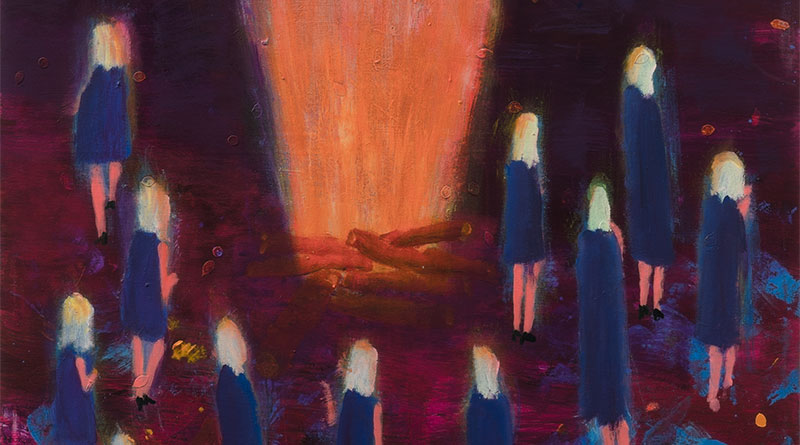 FOCUS: Katherine Bradford at the Modern

After seeing the selection of recent paintings by Katherine Bradford in the Modern Art Museum of Fort Worth’s intimate Focus show of her work, on view through Jan. 14, I found myself searching for the perfect word to describe her surprising color palette. “Saturated” was the word I landed on; these paintings are overflowing with color. Day-glo greens, crystal turquoises, and neon pinks are matched with other colors for which I couldn’t even begin to conjure names. If Bradford’s figures weren’t so attention-worthy in their own right, I’d be tempted to say color itself is the subject of her paintings. But I would be wrong.

Not one of the nine paintings in the Focus show is without a figure. Under Water/Over Water, a vibrant painting which upon first glance appears to be purely abstract, shows two faint figures—a man and a woman—whose blue outlines almost disappear into the shades of blue that compose the water around them. (The artist’s ability to layer tints of black and blue in her depiction of water and night is intoxicating.) The figures in most of Bradford’s paintings lack any palpable sense of agency. They’re marching, entranced, toward some unseen goal, as in Uphill March, or caught, indistinct and almost featureless, under the moon’s delicately illustrated rays in Ritual. Waterfall and Current are stark exceptions, showing figures caught in the water with wide-open eyes and gaping mouths. Given the pervasiveness of color, it’s almost as if the violence of the overwhelming surrounding visual experience forces these figures into anonymity. Perhaps the bathers and marchers make viewers uneasy because while they’re recognizable, they’re also unknowable.

Dystopia is another word that quickly comes to mind. Day-glo green buildings have caught fire while a horde of featureless deep-red figures, the same red as the fire, watch. Have they started the fire? Or are they watching as their home is destroyed? In Solar Eclipse, a more distinct but still blurred group of zombie-like figures, their faces as green as the neon line that cuts the otherwise dark canvas in half, stand in an orderly line in what appears to be night, viewing the eclipse (we assume). Uphill March completes the dark trifecta of Bradford’s neon-inflected, color-saturated dystopia, which resembles some low-tech derivative of cyberpunk. The technology characteristic of the genre may be absent but the alienated and irrevocably modified figures it leaves in its wake are everywhere in Bradford’s work.

Philip Guston is a painter often referred-to in relation to Bradford, thanks to their shared affinity for a certain brand of cartoonish realism and the vague surrealism of the objects and figures in their work; the Modern’s history with Guston and his paintings on view in the gallery adjacent to Bradford’s only serves to re-invoke the comparison. There’s much more space in Bradford’s paintings, though, and a more diverse color palette. Still, viewing their work as abstract depictions of the emotional consequences of living life in their respective times, the parallel is evident.

I’d like to make perhaps a rather more specious comparison—one between Bradford’s paintings and Vaporwave, a relatively recent subculture that emerged from the culture of Internet surfing and sampling. While it’s predominantly a genre of music, the cover art and music videos produced under the moniker also have a particular aesthetic. Vaporwave takes the tropes of cyberpunk and an affinity for the architectural and domestic stylings of the 1950s to 1980s as its subject matter, and everything is bathed in highly-saturated colors—unnatural pinks and purples and blues; a static-y, hazy interruption reminiscent of VHS tapes overlays everything. All of this combines to instill in viewers a powerful sense of nostalgia. There is something about these colors and the haziness that points towards these figures and the objects as being from another time, one we long for that is both knowable and yet so far away, that’s actually quite powerful. I have no idea if Bradford is aware of Vaporwave, but I couldn’t shake the comparison.

Nostalgia is often felt for pasts that never really were, something the past year has, hopefully, taught many. Bradford’s evasive figures and landscapes conjure just that past—one that most likely never was, one we may not even really want, but one we can’t get out of our heads.