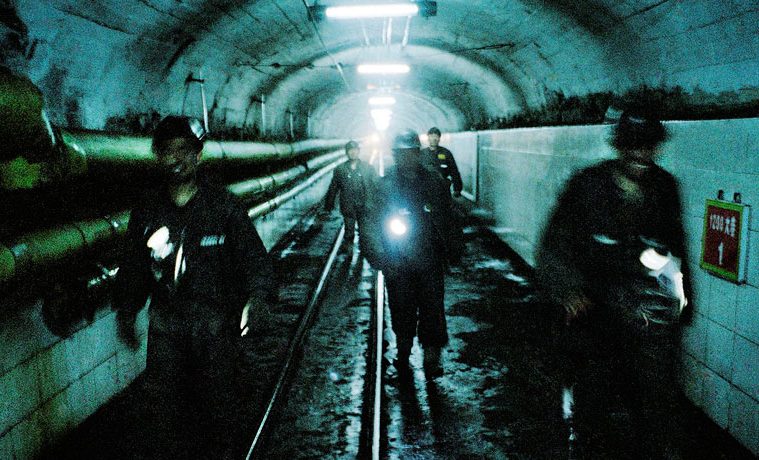 There was only one other person in the exhibition space with me, but she was otherwise occupied.  Talking in hushed tones on her phone, she scribbled away in her date book. Technically, we were in the lobby of an office building, so her behavior wasn’t out of order. Have public lobbies become the only private spaces skyscrapers have to offer?  Judging by the amount of people I saw pacing behind the temporary gallery walls, I would have to say yes.

Spread out over four Downtown Houston lobbies, FotoFest Discoveries brings together the work of fifteen contemporary international photographers.  As the title implies, the FotoFest curators discovered the selected artists during their travels to photography fairs and portfolio reviews across the globe. The photographs that make up FotoFest Discoveries are impressive, intuitive and serious works of art, and testaments to the FotoFest team’s curatorial eye.

For this exhibition, FotoFest partnered with Arts Brookfield, an initiative of Downtown Houston’s largest owner of commercial real estate, Brookfield Office Properties. The exhibition’s programming is responsive to this particular audience, with all openings and public tours happening during the lunch hour. Unfortunately, such events emphasize that it is an exhibition primarily for businesses that pay rent to Brookfield Office Properties.  For someone not working in one of the exhibiting properties, let alone downtown, it is a trying exhibition to get to.  Not to mention that all the art has already been on display at the FotoFest Headquarters on Vine Street earlier this year.

But the exhibition is undoubtedly a worthwhile project, especially by comparison to the art installed in most lobbies and waiting areas. The kinetic sculpture PP-213 by Jaroslav Belik, in Two Allen Center, looks clunky and likely hasn’t been put in  motion since its installation. In FotoFest Discoveries, Arts Brookfield is offering their Houston clients a heartening dynamism not seen in their some of their prior curatorial decisions.

As an example: in the series Tymoshenko’s Escape, The SHILO Group stages a mock night out in Kharkiv, Ukraine with Yuliya Tymoshenko, the country’s former prime minister. Though fanciful, this imagining is actually a cruel irony, as Tymoshenko is currently imprisoned in Kharkiv for her leadership during the Orange Revolution.  It is a peculiar and spirited series, where Tymoshenko is represented by the artists, who don eerie, featureless masks with her trademark Heidi braid across the crown of the head.  In one work, two of the artists stand naked in an empty, grassy lot, wearing their Tymoshenko masks.  One faces the camera, but the other wears the mask backwards, his backside doubling as Tymoshenko’s torso.  In another untitled work, one of the artists grasps the mask in his hand, and thrusts it up towards a statue of Vladimir Lenin. Through biting humor and critical theatrics, the series documents and disrupts the public spaces of Kharkiv.

Despite its corporate surroundings, FotoFest Discoveries does not shy away from weighty themes and unfamiliar politics. Ian Teh’s panoramas of China’s industrial and economic wastelands meld the journalistic and the sublime.  Patrick Gries’s portraits of persecuted albino Tanzanians are sensitive, yet confrontational.

Surrounded by such outspoken material, the work of Fernando Di Sisto is a quietly subversive contribution to the show.  Devoid of people, the dramatically lit urban settings initially read as stock posters of architectural spaces. But Di Sisto photographs the grubbier aspects of city architecture: the aluminum doors of shops rolled down for the evening, concrete walls stained by weather and detritus, security stanchions evenly spaced before an entrance. With stark composition, the architectural features dissolve into shape, color and shadow. Di Sisto’s photographs recalibrate our assumptions of how a space is to be understood and utilized, and prove that these spaces had the ability to enchant and surprise the whole time. Similar, perhaps, to what placing an art exhibition in a corporate lobby might do.