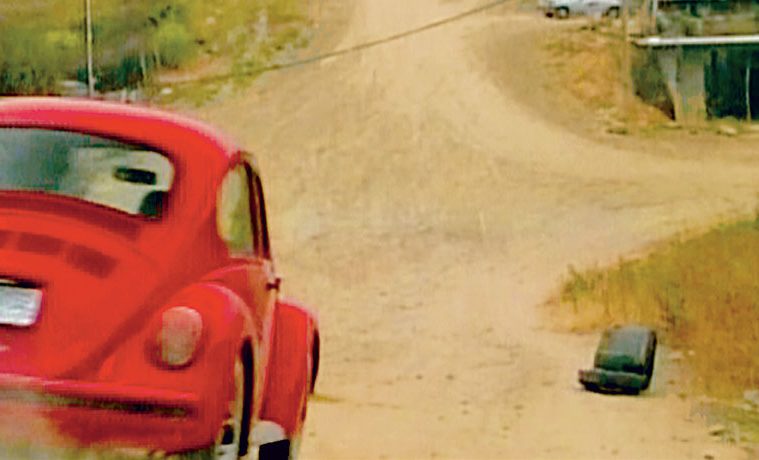 Francis Alÿs & the Poetics of Politics

In Francis Alÿs’s video installation Rehearsal 1 (1999-2001), a red VW Beetle drives up a hill in a rundown neighborhood of Tijuana. We hear a brass band rehearsing a song; each time the music starts, the car moves up a long dirt road. But when the music stops and the players start talking to one another, the car also stops and rolls back down the hill. When they start playing, the car starts again, making its way up the incline.

Absurd yet poignant, Rehearsal 1 is a highlight of Modern Art Museum of Fort Worth curator Andrea Karnes’s groundbreaking exhibition México Inside Out: Themes in Art Since 1990. The piece, which the Belgian-born, Mexico City-based Alÿs came to Fort Worth to install, is an example of Alÿs actions that start with a simple premise to help reveal something about the location in which the action is performed. Alÿs has said Rehearsal 1 alludes to “the Latin American scenario in which modernity is always delayed.” 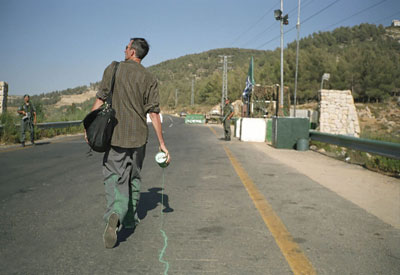 The larger questions of Alÿs’s work are exemplified by the title of his 2005 exhibition in Jerusalem, Sometimes Doing Something Poetic Can Become Political and Sometimes Doing Something Political Can Become Poetic. This piece involved Alÿs walking with a leaking can of paint to trace the Green Line, the border between West and East Jerusalem. This line was originally drawn by the Israeli general Moshe Dayan in 1949 to signify an armistice agreement between Israel and its neighbors after the 1948 Arab-Israeli war. But in 1967, Israel captured East Jerusalem, along with the West Bank and other territories, and today the Green Line signifies the border between Israel and occupied territory.

Alÿs made clear that while that work was first exhibited at the Israel Museum, they didn’t commission it. As with many of his projects, he went there on his own with a handful of questions about the efficacy of artistic intervention to address social tensions. He felt he either needed to push his practice in a more formal, poetic direction or fully embrace the tactics of political intervention, especially after completing a major 2002 piece in Lima, Peru titled When Faith Moves Mountains. 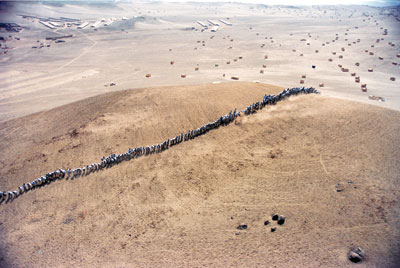 The Lima piece involved 500 Peruvian students who spread out in a line around a sand dune on the outskirts of the city. Armed with shovels, they worked together to displace the dune a few centimeters. The action came at a moment of political transition for Peru when Alberto Fujimori’s dictatorship gave way to democracy. This political shift had great promise but as the shantytown on the edge of the dune suggested, it was also a time of great economic instability. Alÿs was questioning whether monumental political change was truly transformative or merely an absurdly Sisyphean act.

When Faith Moves Mountains has many forms but Alÿs says that he likes the “making of” version of the video best because it shows the process of participation and the immediate reactions that the students had to particular moments in the action.

Similarly, the video version of The Green Line includes commentary by a number of Israeli and Palestinian activists, architects, archaeologists and journalists that reacted to Alÿs’s action. One such reaction by Eyal Weizman was critical of the piece but Alÿs was happy to include it in both the video and accompanying publication because it opened up the ways in which the action could be perceived as well as its political dimensions.

A recent work by Alÿs, entitled Reel Unreel (2011) was shot in Kabul, Afghanistan in response to an event in 2001 in which the Taliban confiscated thousands of films and burned them on the outskirts of the city. His piece follows a group of children that chase reels of film down a hill in Kabul, turning these reels into the objects of a street game. Alÿs was quick to point out that despite the fact that the piece was screened in Kassel for Documenta 13, it was first shown in Kabul in the ruins of a magnificent theater whose roof had been bombed out.

The Kabul screening, like the documented conversations in Lima and Jerusalem, reveal his desire to not only to bring images of people and places that are the sites of social strife to more comfortable parts of the world, but also to exhibit his work at the site of its making. Alÿs said the Kabul audience loved the screening because many of them recognized themselves and each other in the film.

Whether is be the sad act of a little car struggling uphill in Tijuana or a group of boys gleefully unspooling a reel of film down an Afghani mountain, Alÿs often sets up images that reveal profound implications in ridiculous acts. This playful approach to poetics and politics has been enormously influential to a number of artists in México Inside Out. But they have each found their own way to orchestrate the delicate dance between aesthetic and social concerns.

México Inside Out: Themes in Art Since 1990
Modern Art Museum of Fort Worth
Sept. 15-Jan. 5