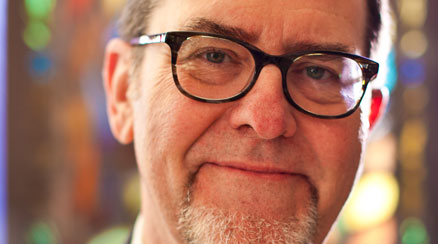 Western civilization owes much of its cultural growth to the cathedrals that nurtured and supported the artists who built them and filled them with art, drug music, and theater. Through its newly created Cathedral Arts program, St. Matthew’s Episcopal Cathedral in East Dallas is continuing the legacy of using the arts to encourage, educate, and stimulate.

Founded in 1856, St. Matthew’s is the oldest Episcopal Church in Dallas. It moved to its present location, in the former St. Mary’s College, in 1929. St. Mary’s catered to the region’s most elite women until financial difficulties forced it to close. Now the church ministers to some of the area’s neediest residents who can rely on a weekly food bank and literacy classes through the Aberg Center for Literacy, making it seem an odd choice as an arts venue.

But in 2011, Michie Akin, the Director of Music and Arts for St. Matthew’s, put together an ad hoc committee, which included many parishioners, to begin looking at the programming in other American cathedrals. More than six months later, they formed their mission statement: “To emulate the historic ministry of the cathedral church, proclaiming the presence of God through the beauty of human creativity and positioning this Cathedral as a center of the arts, culture and community, bringing vitality to St. Matthew’s Cathedral, our East Dallas neighborhood and greater Dallas.”

“I’ve always loved the symbol of the Cathedral in the medieval sense. It was the seat of all things of beauty. People had the experience of beauty and culture. Around the arts, we are about finding a place where people can find beauty regardless of social status or background,” says Akin. He adds, “Post-modern man is looking for roots, which traditionally were found in a cathedral. We can still provide that kind of meaning to a person living today. This Cathedral is ideally positioned to do that. We are in a diverse socio-economic neighborhood less than two miles from the Arts District.”

Akin brings with him a great deal of experience. He is looking to grow the program slowly and sagely, stressing that it is in its infancy. He and the ad hoc committee are now ready to gather more people, with a diversity of backgrounds, to form a steering committee as a way to expand ownership of the programs. In the meantime, the initiative is moving forward.

This past January, Lisa Taylor joined St. Matthew’s Cathedral Arts as Administrative Director. “I am happy to be helping a young non-profit find its footing in the arts community,” she says. With her years of experience promoting the arts in Dallas, Taylor provides an important link between various organizations and patrons. She hopes to eventually incorporate all of the arts into the program. Her role will also include marketing and grant writing. Ultimately, she says, “We would like to have the residents immediately surrounding the Cathedral use it as their community center as well as those who enjoy the atmosphere of a sacred place.”

What is already in place is impressive. There is a gallery space in the Great Hall, which is currently showing Sacred Pause: The Art of Silence, photographs by Bob Munro. Dallas photographer Carolyn Brown will be exhibiting there later this spring. The Cathedral also has its own collection of paintings. These are largely copies of European works ranging from Byzantine icons to Renaissance masters that had been commissioned and donated by the parents of St. Mary’s students. They entered the Cathedral’s collection when St. Mary’s closed.

Since Akin comes from a musical background, it seems natural that many of the program’s collaborative efforts are with musical groups. The Dallas Bach Society has performed at St. Matthew’s several times through this program. They have committed to doing three free concerts per year at the church. Other partnerships have included La Novella Baroque, Chamber Music International, and Booker T. Washington High School for the Performing and Visual Arts.

Most concerts are held in the chapel under the dappled light of its stained glass windows. The window in the apse was commissioned in 1908 by the Belo family and is original to the building. The chapel was enlarged in the 1970s, with additional stained glass windows commissioned at that time. Akin says the chapel offers a pleasant acoustic that is particularly well suited to chamber music.

In an effort to be accessible to all, Cathedral Arts is committed to keeping its programs free. It receives no funding from St. Matthew’s or the Episcopal Diocese. Instead, it relies on support from patrons from the parish as well as community friends. Yet it still offers an affordable rental space with ample parking as one of its many benefits. For the public, Akin is devoted to maintaining a high level of quality programs, emphasizing that they will be broad-based and cross-cultural, without necessarily being religious.

He and his committee have created a multi-tiered plan. In the short-term, it is “to be more strategic in planning events and to building our presence through the St. Matthew’s community, as well as area contacts, and to generating income.” The ultimate goal is to be a stable, funded, respectable organization that will be an established arts center that can provide renewal to the Cathedral, the neighborhood, and the city.

“We hope to be a positive addition to the cultural community in music and art and maybe eventually even to have an artist-in-residence program. We also want to work with children since the arts are being underfunded. The qualities the arts teach include accountability, being a team player, developing skills, and cognitive development. Whatever we can do to support this is critical,” Akin says, adding that there is a social service element to the work they are doing. He hopes to further collaborate with the Aberg Center. Since the Center is only used in the mornings, he has a vision of setting up an afterschool program that would include mentoring and arts education.

One of the large community programs that Cathedral Arts sponsors with the Aberg Center is Cathedral Open House. It is billed as “an evening of music, food and art celebrating the unique educational, cultural and artistic diversity of the Cathedral.” This year’s program, on Friday, May 10, will include, among other things, art projects with the Dallas Museum of Art’s Go Van Gogh program as well as performances by a salsa group from Booker T.

“The purpose of St. Matthew’s Cathedral Arts program is to provide space for a community and to enrich people,” says Akin. Through its connection with the larger Dallas arts community and its local East Dallas neighborhood, this church is indeed poised to be the “big house” for all to gather and be inspired as one great assembly.