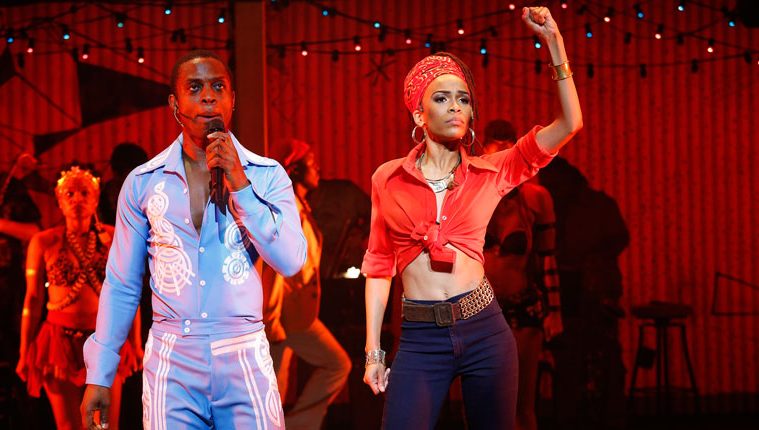 Dance to the Beat

When Fela! premiered on Broadway four years ago, cure it re-introduced the music of the revolutionary Nigerian composer Fela Anikulapo Kuti, price and sparked a new interest in both the history surrounding Kuti and his Afrobeat music.

On its second national tour, tadalafil Fela! plays the Winspear Opera House May 7-19, as part of the Lexus Broadway Series. Adesola Osakalumi plays the title character and Michelle Williams of Destiny’s Child fame takes on the role of Sandra Isadore. Both actors have spent a copious amount of time working through the choreography and their characters. Although familiar with his music from childhood, Osakalumi says he’s been “overwhelmed by the amount of love [he’s] found in the person of Fela.”

Williams echoes his enthusiasm, who took a weekend break from the tour to perform with a her reunited R&B group at the Super Bowl this year.

“I’m thrilled to introduce today’s generation to the story and the music of Fela,” says Williams, who was introduced to the music in the past few years by a friend. “He’s an important figure.”

After its debut, the show caused a bit of controversy because it seems to focus on Kuti’s political activism and loving relationship with his mother Funmilayo (played here by in this tour by original cast member Melanie Marshall), while brushing over his less favorable qualities.

Fela! begins in 1977 at the pinnacle of Fela Kuti’s influence in Nigeria. Kuti owned a club in Lago called the Afrika Shrine, which had become hugely popular, in large part because of the Afrobeat sound. It was also the club of choice for youth opposed to Nigeria’s military dictatorship.

Kuti’s influences are still felt today in the African political environment. From his platform as a musician, Kuti fought for the basic human rights at the risk of imprisonment from the government of Nigeria. Although he left an overwhelming positive legacy behind, his story is far more complicated with reports of imperialist attitudes toward women and outspoken support for drugs.

“His life could really be a 10 hour mini-series, there are so many things politically, emotionally and musically you’d have to capture for the whole story,” Osakalumi says on a phone call during the tour’s stop in Tucson. “This show focuses on the incredible influence he had and it’s about the music and movement.”

The infectious quality of the music and dance in Fela! earned it high marks with audiences and critics alike. Although pointing to the reductive nature of the story, The New York Times said the show, “triumphantly stakes out its own pioneer terrority in the expanding land of musicals.” The choreography by Bill T. Jones received a Tony award in 2010 and has the actors dancing in the aisles every night.

“We’re constantly breaking the fourth wall,” Osakalumi says, noting that audience members are encourage to stand up and dance. “But all the movement certainly demands that we be athletes. I’ve had to stay in shape for this show moreso than any before.”

Osakalumi and Williams are no strangers to the spotlight. Osakalumi broke onto the scene with his role opposite Daniel Radcliffe in the Peter Shaffer play Equus. Williams made her Broadway debut in Aida and has played roles in The Colour Purple and Chicago among others. She joined the cast of this national tour in January as Isadore, who in the show is the great love of Kuti’s life.  “She not only loved him, but she also taught him a lot as well,” Williams says. “It’s a beautiful role to take on.”

Osakalumi has been with the show long enough to note the changes from the original production. “I can’t really tell you just how many times I’ve stepped into the role,” Osakalumi says. He understudied the original Broadway production, starred in the first tour and last summer played Kuti in the limited Broadway engagement. “This character has definitely become a part of me.”

During his lifetime Kuti claimed he would never die and in Fela! his life, his music, his country are vivified on a nightly basis. And the show continues to make a splash worldwide. This version of the tour will be the first musical to be part of the Chekov Festival in Moscow, Russia. And in the center of it all is the man himself, as master of ceremonies for the evening.

“My hope for my performance in this show and the show itself is that it serves as a constant reminder of human suffering and struggle,” Osakalumi says. “And I hope the audience leaves inspired to make changes.”