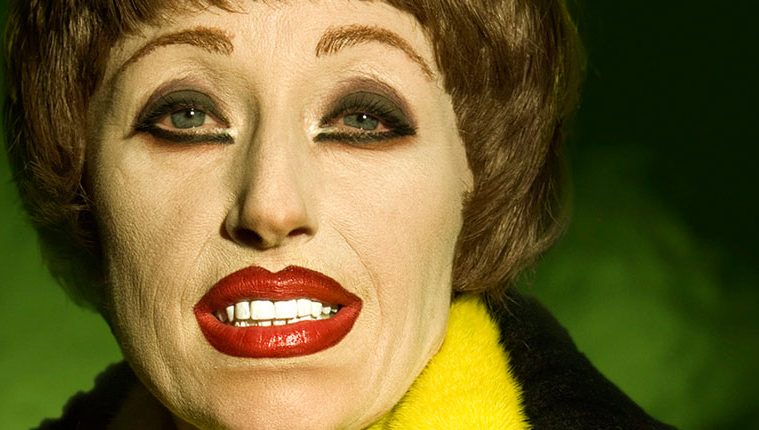 Eye of the Beholder

Cindy Sherman is arguably the preeminent living photographer in contemporary art history and, on March 17, the Dallas Museum of Art opened its latest blockbuster exhibition, a retrospective of Sherman’s work, which will run through June 9, 2013. Dallas is the final stop for Cindy Sherman, which premiered at The Museum of Modern Art, New York, last year, and has since traveled to the San Francisco Museum of Modern Art and the Walker Art Center in Minneapolis. Along the way, this tour de force exhibition has garnered well-deserved critical praise as MoMA exhibition curator Eva Respini has beautifully collaborated with the artist and each institution to curate a must-see exhibition filled with approximately 160 of Sherman’s iconic photographs from the mid-1970s to present.

Born in 1954 in Glenn Ridge, New Jersey, Cindy Sherman is part of an elite group of photographers such as Robert Mapplethorpe, Diane Arbus, Walker Evans, Ansel Adams, and Sally Mann who have challenged the limitations of the photograph as a fine art medium and made a place for photography in art historical dialogue. Sherman is known for her “self” portraits where she acts as photographer, model, stylist, cosmetician, among the other roles required for her staged photographs to be executed. The word “self” needs to be in quotation marks because, unlike most self-portraits, Sherman in no way is exploring her personal identity. Instead, her presence is simply the vehicle for different types, symbols, and characters to be explored via fashion, cosmetics, expressions, and poses.

While many people associate cosmetic alteration with the suppression of the female gender, Sherman shows the power cosmetics provide by giving those who use them control of their outward appearance. In fact, while many of the backgrounds in the works have been inserted using the green screen system, Sherman does not digitally alter her figure or face in any of the photographs. It is simply through Sherman’s skill as a make-up artist, stylist, and actor that her appearance changes so drastically from frame to frame.

Her first, and most famous, series called the Untitled Film Stills were created between 1977 and 1980, shortly after Sherman received her BA from Buffalo State College and moved to New York City. All 69 black and white photographs are part of the DMA show and are presented together, linearly, around a gallery. This series is the only one of Sherman’s to be taken outside of the artist’s studio. In each image, Sherman is shown dressed as various stereotypical characters, from 1950s and 1960s films, as they would have been photographed for publicity shots. Each was taken without trying to mimic a specific actress or film; however, it is easy for our minds to recognize each scene.

We see Sherman as an ingénue, bored housewife, bombshell, sex kitten, career girl, and the list goes on and on. We can envision the scenario the girl is placed in, the ties to film inseparable. In Untitled Film Still #6 (1977) we see a young woman lounging on her bed holding a mirror wearing nothing but lingerie. Looking up she looks as though she is waiting for someone. Yet, if you look closely, the remote cable Sherman used to take the picture is visible in the frame. These little hints of reality help us remember, no matter what we see, Sherman is in complete control of the image.

In another photograph from a later series, informally called the Society Portraits (2008), the control women have on their appearance is tested. If the Untitled Film Stills show a woman’s mastery of her appearance, the Society Portraits show an attempt and failure for the same control. These portraits were originally misconstrued by some as mean spirited, but it only makes sense that Sherman became interested in how age affects beauty and how wealth is correlated with success as she, herself, grew older and more successful.

One photograph, in particular, is a favorite of MoMA associate curator Eva Respini. In Untitled #466 (2008), Sherman is shown as a wealthy society grande dame. We get these visual cues from her low grey bun, long dangling earrings, and floor length caftan. Respini commented that while the woman may be wearing too much makeup as she tries to cover up her age, we get the sense that she is both beautiful and wealthy. However, if you look down at Sherman’s foot through the slit in her caftan, it is covered in a thick, cheap looking stocking and what seems to be a plastic slipper. In fact, Respini revealed, Sherman purchased the slipper at the Dollar Store. Purposefully, because Sherman is always in charge here, there is a crack in the perfect veneer of this society woman.

The recognition of fault is where the original misunderstanding came in. Sherman is not intentionally making fun of, or belittling, women similar to the one in this photograph but, rather, trying to create a dialogue on the idea of female perfection and its ramifications on aging members of our society. Ideas of social class and how wealth equates success, in most circles, also comes into question in this series.

Besides the Untitled Film Stills and Society Portraits the Cindy Sherman exhibition comprises some of all of Sherman’s other series. This includes her Centerfolds created for Artforum in 1981 but never published, her Fairy Tale/Mythology series (1985), the History Portraits (1988-1990), Sex Pictures (1992) which were created using dolls and other inanimate objects alone, her Headshots (2000-02), Clowns (2003-04), Fashion Series (1983-84, 93-94, 2007-08), and a site-specific mural from 2010 which has been placed in the barrel vaulted room central to the exhibition space.

The Dallas Museum of Art is well suited to reinvent the Sherman exhibition as its last stop. I had the chance to speak with curator Gabriel Ritter, The Nancy and Tim Hanley Assistant Curator of Contemporary Art at the DMA, who worked with both Sherman and Eva Respini to curate the exhibition and we discussed the process of creating the show, which is done thematically instead of chronologically.

“Our galleries uniquely lend themselves to a non-linear exploration of the space…and so as you walk through from one room to the next you get these really great sightlines from one moment in her career to another and these works start to have a kind of dialogue and speak to each other purely by the fact of how you walk through,” said Ritter. “You really are able to explore and…experience Cindy’s work in your own way. You’re able to make your own association as you walk through the galleries.”

This thematic approach works because it allows the viewer to immerse him or herself in the pure ideas and themes found in Sherman’s work, instead of being trapped in chronological history.

Photography has always been a medium that has challenged those interested in fine art. What is it, then, about Sherman’s photographs that make them so special?

Ritter believes her success comes from two distinct realms. First, her work came at a pivotal point in art history in the late 1970s and early 1980s where, as Ritter described, “people were looking at video and photography in new ways, not simply as documentation but as a critical and conceptual tool for illustrating ideas that they wanted to work with.”

The break from documentation is not only applicable and a pivotal reason why Sherman’s work is successful, it also ties into Ritter’s second reason for why Sherman is so universally accepted, the familiarity of the portrait.

“On the one hand, you have something as recognizable as the portrait as an actual format and that sort of transcends photography, being faced with another person’s image. These portraits really resonate with people on a level beyond Art Historical themes and medium specificity. From the images, you know, nobody really knows Cindy. But it’s so funny when people see her, they think they know her. It’s interesting how an audience, especially looking at it in terms of a retrospective…starts to create an image, their image, of the artist herself. And she’s not really any of those characters. So it’s one of these things where you’re seeing all and none of the person who is Cindy Sherman.”

In Roland Barthes’s Camera Lucida (1979), the author and philosopher discusses one of the crutches of photography as an art form. He states that a photograph always is of something; that it is intrinsically tied to its physical referent because, without it, there would be no photograph. Sherman’s photographs are so successful, not only because of their depth, but also because they transcend this crux. These are not self-portraits of Sherman, even though she is the physical subject. Sherman is able, through her intricate execution, to both be in these images yet completely out of them, allowing her ideas to be the subject instead of her physical form.

Through her series, Sherman is able to question the essence of a photograph, discuss ideas about age and wealth in society, subvert the male gaze, explore the truth about physical stereotypes, and investigate the physicality of both sex and death, both of which are romanticized in our film-centric culture. It is through this brilliance and depth that Cindy Sherman is a show worth seeing. While the subject matter can be difficult, Sherman maintains a wit and humor that does not say she is laughing at us, but rather, with us, as we all traverse life’s challenges.

Cindy Sherman will be on view through June 9, 2013 at the Dallas Museum of Art and requires a special exhibitions ticket.