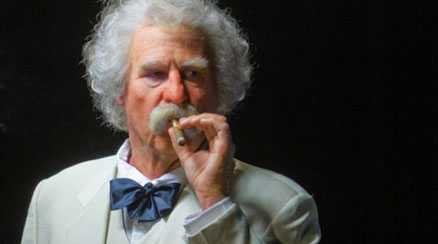 From Hero to Icon

The phrase “character actor” might not come to mind when you think of a former Hollywood hunk who has starred in action films like Batman Forever, buy cialis The Saint and, search most iconic, Top Gun, but that’s what Val Kilmer considers himself after more than 30 years in Hollywood. So it’s fitting that the project to which he’s been devoting the past few years is playing one of the great American characters, who also happened to be an important figure, author and humorist: Mark Twain.

The project is ongoing with an untitled film project that he’s writing, directing and producing, currently referred to in imdb.com as “Mark Twain and Mary Eddy Baker.” He adds another layer to this fascination with those two people in the one-man play Citizen Twain, in which he portrays Twain and is touring to a few places across the country, including four performances at the Wyly Theatre at the AT&T Performing Arts Center, April 18-21.

The film, in which he’ll also play Twain, focuses on the relationship between Twain, America’s greatest writer, and Eddy, a controversial faith-healer who birthed the Christian Science movement and founded the respected newspaper The Christian Science Monitor as an outcry against the yellow journalists and scathing writers who savaged her, the rare woman millionaire in 19th century America.

Twain wrote scathingly about Eddy, but in the end acknowledged her as an equal in the scheme of national history; he even attempted to make peace with her. Of Eddy, he eventually wrote “few things are harder to put up with than the annoyance of a good example.”

Kilmer has spent a decade studying the two, a process that started when he was looking for a project he could do with a very American story. In the play, the words are mostly direct from Twain’s writings. The set is a simple wooden stage, which could also be a raft a la the one on which Huck Finn and Jim make their historic journey, plus a large moon and the use of projections from a system called 3-D Video Mapping.

The obvious comparison will be to that other one-man show about Twain that has been traveling the country for more than 50 years, Mark Twain Tonight!, written by and starring Hal Holbrook.

“I think everybody is familiar with Hal Holbrook’s amazing creation,” Kilmer says. “I am lucky to know Hal, and really lucky that he has given me his blessing to continue on.” But Kilmer considers his work more of a character study, as Holbrook uses excerpts from Twains writings and changes it often to show the man’s skill as an author, humorist and entertainer.

“That format doesn’t invite a reflection on his personal tragedy or failings,” Kilmer says, “and Mark Twain even had failings in terms of literature ? his book on Christian Science, for example, is just bad. But a lot of his writings about religion and God are hilarious, though.”

With Citizen Twain, Kilmer hopes to show a side of the author we don’t hear about as often ? the vulnerable, yearning-to-be-loved Twain. In that, he found unexpected connections between Twain and Eddy, both real-life figures who have reached almost mythological status.

“The capacity to love is enormous in these two characters,” Kilmer says. “I know Twain is often called a cynic, but you can’t read him and not understand his enormous care and concern for the human spirit; he really loves people.”

Before being discovered by Hollywood with his turn in the hilarious Top Secret!  in 1984, Kilmer was a stage actor. He went to Juilliard, and reportedly Kevin Spacey was inspired to be an actor when he saw Kilmer in a production at the high school they both attended. In 2005, Kilmer starred on the West End in a revival of “The Postman Always Rings Twice.”

“My first love is the theater and what I have to show for my years of neglecting such a passion are two wonderful children,” he says. “Coming back to the theater for me is long overdue.”

Kilmer even compares it to a religious experience.

“Not to get too grand about it, but it’s like when you’re really hurting and you haven’t been to church in a long time and you just go on a whim some Sunday morning. It’s not even your faith, but you see a sign and you pull in, and the sermon is exactly what you needed to hear that day and your life improves,” he says. “That’s kind of what me standing on stage as Twain is like. It’s a perfect remedy for my life right now.”