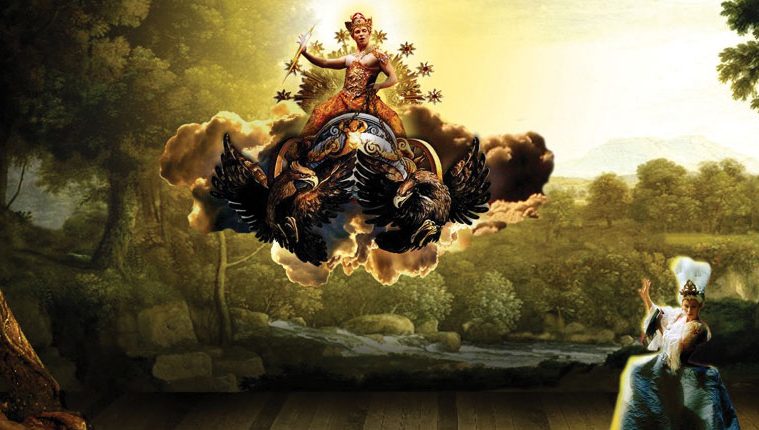 Rendering of Silvio costume for Cupid’s New Weapons of Love.

Orchestra of New Spain is planning a special Valentine’s concert that will transport audiences to the romantic period of 18th Century Spain, a two-hour show filled with gorgeous arias sung by renown singers in stunning period costumes accompanied by a live orchestra and dancers adorning the stage.

The Dallas-based Orchestra is a group dedicated to Baroque performance practices and to using historically accurate instruments, which sounded different to instruments seen in modern symphonies. What’s more, this performance will be, as they say, “something old and something new.” The group will present something old, a completely accurate and fully staged recreation of a Baroque Spanish comic opera (zarzuela) in the newly opened City Performance Hall.

The work on show is “Cupid’s New Weapons of Love” by Sebastián Durón on a libretto of José de Cañizares. Neither composer or librettist are not known by even the most dedicated contemporary concertgoers, yet both were world renown at the time.

The slim plot, Cupid’s loss of his arrows to Jupiter and their return thanks to Diana, acts as a coat rack on which the composer hangs some absolutely lovely music. In keeping with the traditions of the era, the interval between acts will feature six dances that tell a completely different story, El maestro de danzar (The dance master). The scenario is by a writer from the era, Francisco de Navarrete y Ribera. It is a repertoire of literary excellence, with music that offers a vehicle for vocal virtuosity and regional color.

Baroque operas, especially those of Handel, have experienced a renaissance lately with signature performances around the world. The Dallas Opera staged impressive performances of Handel’s Rodelinda in 2006 and his Ariodante in 1998. They were done approximately in the Baroque manner, with sumptuous costumes and beautiful, somewhat abstract, sets. However, they used modern instruments in orchestra.

Unlike the Dallas Opera’s approach, some revivals are completely updated (you might say “upended”), almost to the point of absurdity. The critic Zachery Woolfe, writing in the New York Times, incredulously describes the appearance of the character Bacchus in Calixto Bieito’s production of Rameau’s Platée at the Stuttgart Opera as “…an immensely large, nearly naked woman — so large that my first thought was that her enormous breasts were prostheses.… (and) the chorus stood around her and caressed her, rubbing her breasts as they invoked the god in song.”

Well, there will be none of that tomfoolery here. As his many fans know, Music Director, and the energy behind the Orchestra of New Spain, Grover Wilkins is all about historical accuracy in performance practices. He has assembled a mixed Spanish and Argentinean production team that will recreate the style, gesture, and dance of the original. The production will star the outstanding Mexican mezzo-soprano, Carla López Speziale, and feature Spanish dancers Jaime Puente and Yolanda Granado Requena. Stage Director Gustavo Tambascio, has built an international reputation in the rarified field of Baroque opera with critically acclaimed productions in Madrid, Naples, and Sevilla. Needless to say, the elaborate period costumes and sets commissioned for this production will be meticulously true to historical detail.

Chariot of Jupiter rendering for show.

The Orchestra of New Spain is already well known for playing on Baroque instruments, which are very different from their modern day cousins. The score calls for a smallish orchestra: two violins, a cello and a bass, a harp, a teorbo (bass guitar), drums, a trumpet, and, of course, castanets. “And a thunder machine,” added Wilkins with a sly grin.

Wilkins first encountered one act of the zarzuela in 1989 when he was digging around in the archives of the National Opera in Madrid. “Some time later, I met the scholar Gordon Hart, who had translated the text and transcribed the music. In 2007, we presented some selections of the score at the San Isidro Museum in Madrid and, in 2008, at the Meadows School of Music in Dallas. In cooperation with the Texas Camarata (another original instruments group), we presented it at the Modern Art Museum in Fort Worth. Now,” he said with obvious pride, “we will see the entire production, much as it would have been seen in 1640s.”

Due to the limitations of the City Performance Hall as a theatrical venue, there is no fly space for one thing; the sets will all be made of painted drops. They are newly made from preserved drawings of set designs of the era. The costumes are also based on historical drawings and are being built by the Dallas Costume Shop.

Wilkins will have almost a month of rehearsals. “I realize that this sounds luxurious for an opera like (Puccini’s) La Bohème, but our singers have to learn a completely different way of acting and singing. They have to get in the Baroque groove,” he said.

He doesn’t have that problem with his orchestra. “The original instrument movement started decades ago, so most orchestral players have some acquaintance with Baroque performance practices. They may not have Baroque instruments, but they get the style. Of course, my players all have accurately reproduced instruments and we have worked together for years,” he said.

“We have lost something by our constant updating,” said Wilkins. “If you go back to the source and do this music like it was originally done, it is more convincing and more integrated than any modern version.”

As Woolfe summarizes in his afore-mentioned and excellent article on the subject, authentic Baroque performances of opera are “…far enough from the way opera is done today to be mesmerizing.”