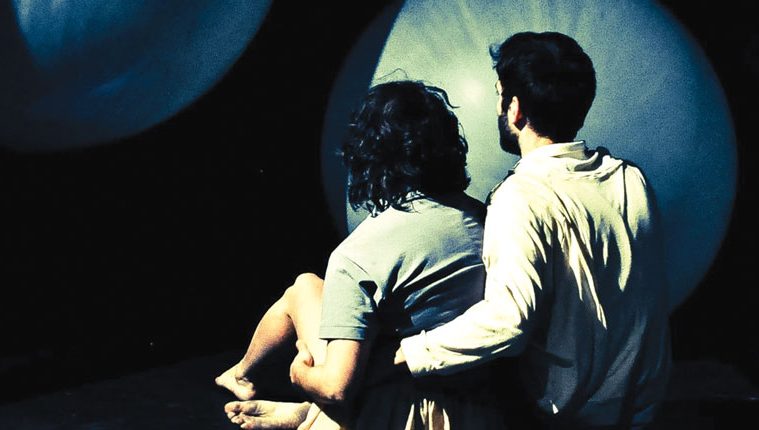 The 7:00pm performance will be followed by a reception at Ro2 Art’s Downtown Projects gallery, located at 110 N. Akard Street, between Main and Elm, on the ground floor of the historic Kirby Building.

Premiering to critical acclaim at the Rogue Performance Festival in Fresno, California in March 2013, “Pizzicato Porno” digs at the meat of intimate human interaction. The fragility of honeymoon hormones bleeds onto the dancers head from video into live performance. The dancers fill weather balloons to insulate themselves from one another, and use the distance to project video experiences as meditations on their collective past relationships. Fear and curiosity drives the interaction, displayed by the innocence of physical play, which, in turn, dissolves into lack of communication and distrust. Looping the sounds of live, improvised violin plucking, the chaos of sound sets the mood of a constant stream of thoughts. Tacit emotional reactions set to music. In the end, the relationship of dancers, to each other, to the environment, and to the event, are all seen as a complete, non-linear romance. The relationship is seen as a dance, a construction, and a soft failure – the inherent qualities of any human interaction.

Georgiou is a dancer, choreographer, and video artist based in Dallas, Texas. She was recently selected to represent UT Dallas’ graduate program in art at Red Arrow Contemporary’s Best of MFA exhibition, and was the first runner-up for the “Dallas Observer Mastermind Award” in 2013. She is the Visiting Scholar in Dance at Eastfield College and the Director of the UT Arlington Dance Ensemble. She is also a regular contributor to Arts+Culture magazine.

Locklear is an actor, musician, puppeteer, and costumer based in Dallas, Texas. A graduate of the Baylor theatre program, Justin pioneers the suavante garde as one of Matthew Posey’s Ochre House boys, as well as designing costumes and music for various theatre groups in the Dallas/Fort Worth area. In 2012, he was selected as one of the “13 people to watch in 2013” by FD Luxe, Dallas Culture Map’s “5 Best Actors in Dallas,” and in 2011, he received the DFW Theater Critics Forum “Emerging Artist Award.”