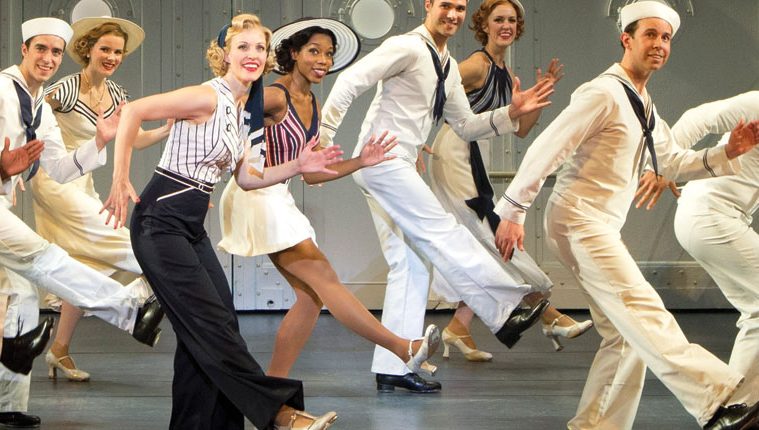 Broadway actress Rachel York seems to have it all: impeccable comic timing, a deftness for dance, and a dynamic voice that carries all the way to the rafters. The triple threat was in fine form for Wednesday’s opening night of Anything Goes, the latest touring production to dock at the Winspear Opera House as part of the Lexus Broadway Series at the AT&T Performing Arts Center. York plays the lead role of nightclub singer Reno Sweeney in the national tour of the 2011 Roundabout Theatre Broadway revival of the Cole Porter musical, which garnered three Tony® Awards in 2011, including Best Revival of a Musical.

The show is a chestnut of American musical theater, having first bowed on Broadway in 1934. Since then, it has toured endlessly and been a staple of many community theater schedules. Regardless of age, the jingly Porter tunes still carry the show, while the big dance numbers give a jolt to the tired story of madcap (i.e., silly) antics aboard an ocean liner headed for a sweet and tidy destination. This show isn’t on the map for lovers of loud in-your-face theatrics, which explains the sea of blue hairs that flock to this type of gentle fare.

As the S.S. American heads out to sea, two unlikely pairs set off on the course to true love…proving that sometimes destiny needs a little help from a crew of singing sailors, an exotic disguise, and some good old-fashioned blackmail. Peppering this humorous bumpy ride are some of musical theatre’s most memorable standards, including ‘I Get a Kick out of You,’ ‘It’s De-Lovely,’ and of course, ‘Anything Goes,’ which gets a show stopping arrangement to close out the slightly drawn-out first act.

While York is the real captain of the show, she does get some strong support for Fred Applegate as Moonface Martin, a two-bit mobster on the run, and Joyce Cittick, who plays the mobster’s moll in a feisty, over-the-top fashion that causes one to giggle every time she moves. Technical credits are solid; Derek McLane’s tri-level ship set is gorgeous. It’s bright and open and allows the cast to be dynamic without being crowded or hidden. Period costumes by Martin Pakledinaz are vivid and capture the essence of each character.

Director Kathleen Marshall took home a Tony Award for her choreography of this show, which amazes in many of the numbers with York front and center as the shining star guiding this musical voyage.