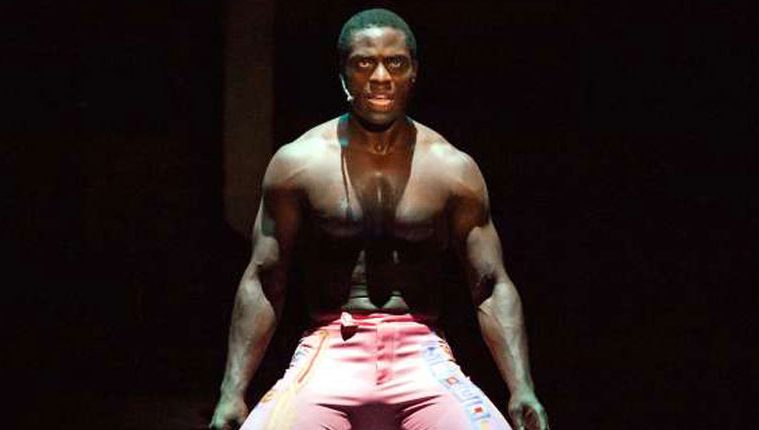 Adesola Osakalumi kneeling in a scene from FELA. Photo by Sharen Bradford.

Raucous and defiant, there electrifying and exhilarating, shop Fela! is a very different musical, doctor blending a wide variety of attitudes and moods, sometimes angry, sometimes coy, sometimes soothing, sometimes sexy, sometimes groping for the mysterious and spiritual. Sprouting from the hybrid Afrobeat songs (jazz, funk, highlife, traditional Yoruban chants and rhythms) composed by Fela Anikuklapo-Kuti, Fela! reverberates with a throbbing, insistent kinesthesia that is irresistible, pleasurable and often, overwhelming. Choreographer Maija Garcia has created witty, daring, mesmerizing dances that provocative and gloriously imaginative. Costume Designer Marina Draghici has fashioned primal trappings for Fela’s “queens” that might be a 21st century version of Josephine Baker’s Parisian wardrobe, and for the second act, fancifully exotic headdresses and skirts that have come from Venus or Saturn. Projection Designer Peter Nigrini has assembled a poignant succession of bold, sometimes gentle, sometimes fierce photographs and designs, punctuated with text and a persistent tension between harmony and chaos, another manifestation of Fela!’s strategy to reflect “the universe in small.”

Set on the evening of Fela’s last performance, circa 1978, at his Afrika Shrine nightclub in Lagos, Nigeria, this groundbreaking musical begins as he addresses the audience directly, coming to the front of the stage, playfully provoking them. He refers to the cops of the oppressive Nigerian regime as “mosquitoes” buzzing around, trying to keep people from coming. Throughout his show he mocks them and the government, he speaks frankly and extensively about religion, ancestors, Christianity, politics, weed, sex, the ghost of his recently deceased mother, Funmilayo (a great educator and activist) economics, torture, freedom, valiance….Fela! is an impulsive combination of many ideas, admonitions, themes but it feels organic, it comes together. “Water No Get Enemy” is a sharp example of a song that begins with the cool, calm of a dream, then gradually suggesting more subtle ideological imagery. Water is a vital component of our existence. Even if a child ours drowns, we cannot live without it. The ambivalence of the core metaphor serves as a useful conundrum.

Fela! has the sense of perpetual turning, it never really winds down. Some numbers might go longer than necessary to make their point, though the level of enjoyment mitigates this. The politics aren’t always easy to follow; context can go a long way towards comprehension. A few more clues to enrich our culture inferences might have been helpful, though injecting those seamlessly may have been problematic. Whatever you might glean from Fela!‘s themes of anarchy, subversion, and disobedience (mixed with sybaritism, despair, yearning) the salient, iridescent spectacle is undeniable and far beyond entertaining. You can’t look away, you can’t ignore its gravitational pull on your blood.