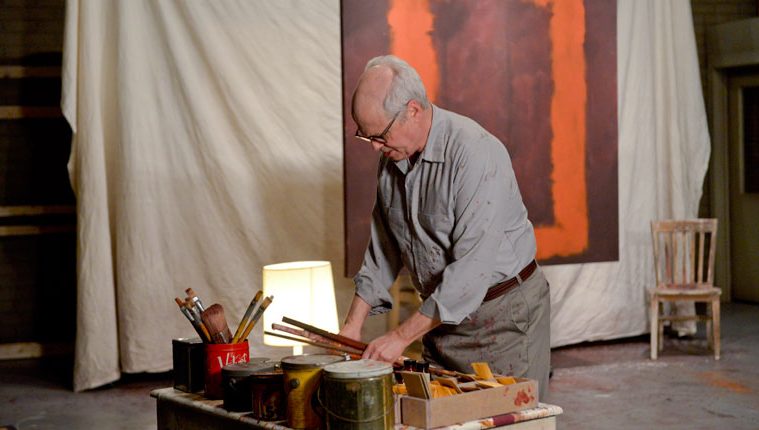 What is the nature of brilliance? What is the nature of genius? Are those destined or determined to wrestle with the searing, implacable issues that plague we poor, pathetic mortals, doomed to a life of misery and inconsolable rage? These are questions raised in John Logan’s volcanic, yet understated treatise on Mark Rothko: Red.

One of the most revered and seminal of the abstract expressionists, Rothko, despite widespread recognition and exceptional success (for the time) was profoundly troubled and took his own life in the early 1970’s. Though non-representational, his paintings were accessible, cogent and deeply evocative. Though less confrontational than say, Pollock or DeKooning, they were charismatic and alluring, exploring the complications of hue and mood.

Logan’s drama is especially strange and compelling because he avoids the mistakes of other playwrights (and screenwriters) who can be rather hamfisted when it comes to depicting the life of an intriguing historical figure. We are not invited to worship at the temple of Rothko (quite the reverse, in fact) but neither can we, entirely, dismiss his truculent, perverse behavior as self-indulgent. By using the device of Ken, Rothko’s younger assistant, we learn everything we need to know about the tempestuous, infuriating painter, without feeling led. From the moment he hires Ken, Rothko is insufferable, he makes it clear it doesn’t view Ken (Jordan Brodess) as an apprentice or protégé, though this is, in effect, what happens. And Rothko (Kieran Connolly) understands this. Why would anyone sign on to assist a great artist if they didn’t hope to learn something?

Rothko’s disingenuousness is just one of his abrasive traits. He invites the young man to express an opinion then ferociously rebukes him for the insolence of presuming he’s a peer. He goads him into retaliation, then punishes him for doing so. In his own perverse

way he wishes to guide Ken, but like so many male/male heterocentric rituals it must be presented as pugilism or a pissing contest. There are times when we wonder if Rothko has set up the arrangement as cheap psychotherapy, a means to exorcising demons or addressing vital issues without putting his vanity in jeopardy.

Another aspect to Logan’s play might be the degree to which we tolerate the despicable aspect of geniuses, because we figure we’re out of their league. Icons like Hitchcock and Picasso could be repugnant and abusive but they often acted out with impunity. However we might feel about Rothko the man, by the end of Red, we have certainly been drawn into the tumultuous and exhilarating conflicts that informed his creative process.

Bob Lavallee’s scenic design is inspired, recreating Rothko’s studio, simply, vividly, effectively, and putting us right in the midst of it. Director Joel Ferrell has struck just the right tone : somber, reflective, dry but seething. Connolly and Brodess have done an impressive job, portraying the megalomaniacal creator and his deferential, martyred pupil.