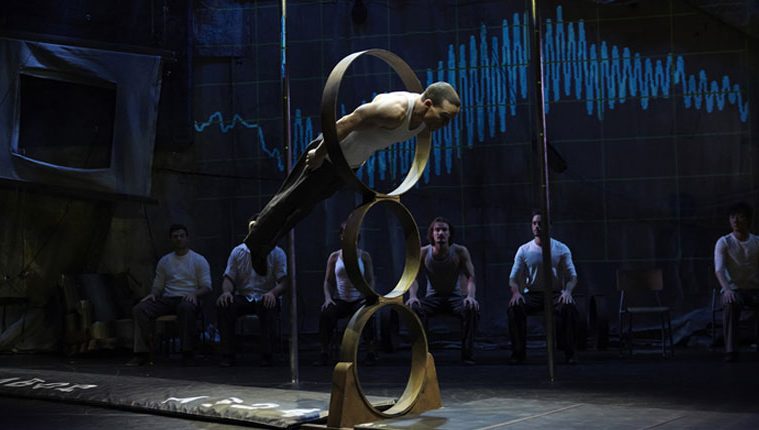 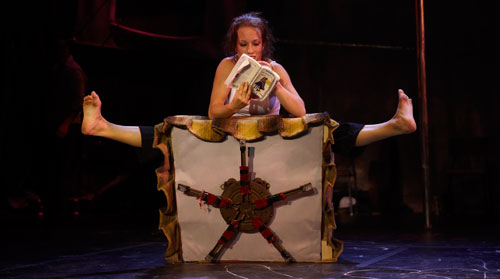 Combining traditional acrobatic forms with street elements such as skateboarding and basketball, help mixed in with some theatre and contemporary dance, seek “Traces” soars at Winspear Opera House.

You know what I like best about live theater? No CGI. The magic is real, as it was for the opening night of “Traces,” the edgy acrobatics show now soaring and tumbling across the stage at the Winspear Opera House through June 23.

It would be easy to say that this new show is just Cirque du Soleil stripped down or “Stomp” without the trash can lids. But “Traces” has more heart and soul than that.

“Traces” fuses the traditions of circus with the energy of street performance to create an explosive display of emotion and physicality set to the music of Radiohead, VAST, and Blackalicious. The seven spirited performers run, jump, soar, spin, flip, tumble, skateboard, glide, ricochet and plunge in a multi-discipline performance that is both intriguing and impressive. 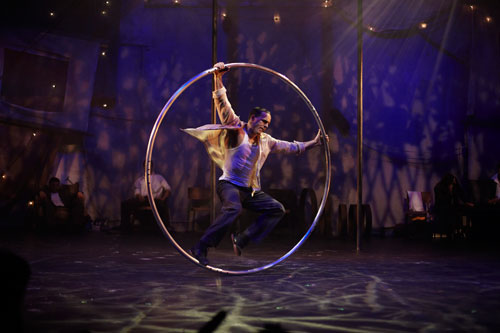 The purpose of “Traces,” according to the program notes, is to combine diverse performing forms into one magical new mix — the sort of “new form” that Chekhov saw as an imperative for every generation. On a stark stage, the performance is really a continuous flow of motion lurching into a series of 16 scenes– some solo, some duets, some ensemble.

Each number touches on a human emotion, some humorous, some thrilling, and others quite touching. One standout scene finds a girl reading a book in a big armchair, which she uses as a giant prop somersaulting in a wild mix of positions, all the while as she reads her story. In another inspired bit, the ensemble crisscrosses the stage on skateboards in a wonderful salute to the old Busby Berkely musicals, complete with overhead cameras so audience members have a clean view of the synchronized kaleidoscope of motion. 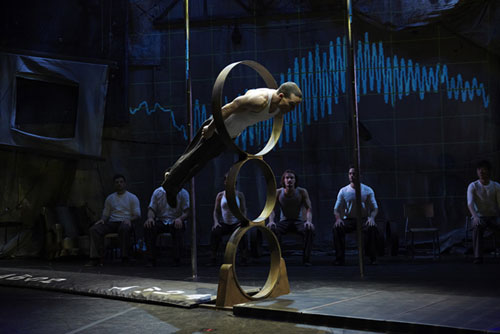 Produced by 7 Fingers, a company from Canada, the entire production charges ahead to the beat of throbbing urban music, rap and piano solos of original composition. These performers not only fly through the air, but also play piano and do some singing too. But overall, it’s an ensemble effort with each artist sharing the spotlight. The members are not nameless or camouflaged in wild costumes. The six men and one women are real living and breathing artists, albeit mostly skilled in feats of athleticism no average person would dare to try.

“Traces” is spectacularly low-key, relying instead on the fantastic abilities and charisma of the performers, individuals who appear to be nothing more than a group of friends, just as easygoing, affable, and potentially clumsy as the guy next door—until they unleash an energy that lands them in a super-human category.