From Outside to Inside

The art of Carlos Donjuan

Editor’s Note: In honor of Dallas-based artist Carlos Donjuan’s solo show, Everything Means Nothing, on view at Kirk Hopper Fine Art through Dec. 30, A+C contributor Lee Escobedo reflects on the work of the legendary Dallas artist and its impact on his own. 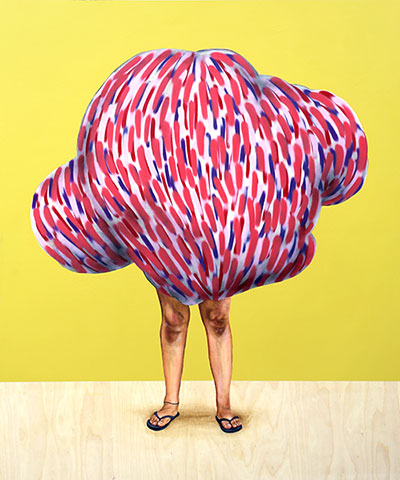 We were trying to find tacos and horchata in the heart of Oak Cliff the first time I really remember seeing the Sour Grapes Crew. It was a mural of popsicles with different facial expressions on the side of a mercado, down the street from where I was living a few years back. I don’t remember the street, and don’t need to. I like to think the entire neighborhood of Oak Cliff is draped in the murals of the neighborhood-bred Sour Grapes, founded by the Donjuan brothers. I was with my best friend and co-founder of THRWD Magazine, Javier Valadez Jr. We were in the early troughs of THRWD, pulling from punk music, hip-hop culture, and graffiti art to create what would be the initial foundation of THRWD’s aesthetic.

At the time, Javier knew more about the graffiti collective’s story than I, and informed me that the oldest Donjuan brother, Carlos, was also a professor of art at the University of Texas at Arlington, where both Javier and I had studied. I immediately began researching the Donjuans to find out more: I tracked down all of the group’s murals, visited their open studios, and eventually invited them to collaborate on a THRWD event at the former Gin Mill, where they created a painting outside during one of our monthly parties.

To a young Latino like myself, interested in the Dallas art scene but existing mostly outside of it, the work of Carlos Donjuan was embedded with the signifiers that composed my emotional identity: Love of family, honor, loyalty, heritage, along with vibrant color palettes and a unique perspective on representation in painting.

As a young writer, it was beautiful for me to see a Latino artist inspiring and changing the hegemony within the Dallas culture. Finding and identifying with Donjuan’s work motivated me to think even farther outside of the box, discovering our city’s growing conceptual art community and the music scene which was blending performance, camp, and noise. I became more and more aligned with the theoretical leanings of work being shown at Oliver Francis Gallery, The Reading Room, and at the Dallas Biennial, where Donjuan’s paintings didn’t seem to fit, aesthetically or conceptually. 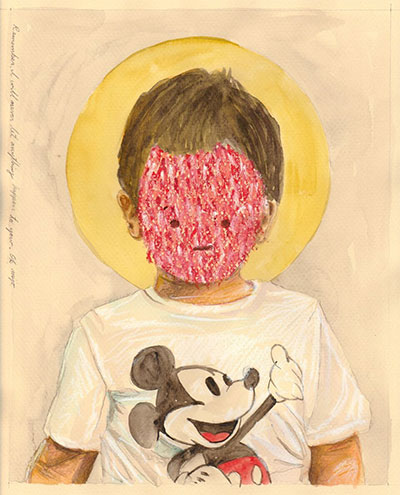 But through my navigation of the city’s art scene I have never lost my respect and love for Donjuan’s work, which has since been featured on the cover of New American Paintings, Juxtapose Magazine, and exhibited in the Dallas Contemporary, when Sour Grapes showed “Rest in Power” in 2011. His work has something in dialogue with the lowrider magazines I used to secretly steal from the corner gas station:  There is a viable link to the “underground” lexicon in his work, connecting to the academic language of painting through a series of images that promote pride and self-awareness, at the same time as they connect to the visceral images of Aztec warriors gracing the cover of those car magazines.

It’s interesting that the figures in Donjuan’s paintings, usually the central focus of his work, almost always have their faces obscured by color, or shapes, or even replaced with animal heads. Although I am able to peer through these coded messages and read his brothers, wife, and son depicted in certain pieces, the purposeful ambiguity of these figures has always added another level of complexity. While in a way he is painting an ode to his loved ones, he is also depicting these figures as timeless archetypes of Mexican-American culture. The brother, the lover, the kin. Within these works are nods to the Renaissance through poses and stance, as well as gestures towards religious iconography from the period. These are figures relatable to all.

Recently, Donjuan’s paintings have become slightly grittier. Perhaps it is the wizened and greyed lens in which I see them now as a viewer. As artists evolve, hopefully, so does their audience, ready for new twists and turns within the work. Paintings made this year possess a stronger sense of the now, a mortality to their being, depicted through a focus on children. There are many young, brown faces in these newer works, a rare sight in Dallas painting exhibitions. Yet, like the adults depicted in the series, there seems to be a hint of melancholy expressed here as well. Closed lips, deadpanned searching, downward tilted heads, subtle strokes that suggest a heavy contemplation by the painterly hand.

Donjuan’s work seems to be asking more open-ended questions than before. Perhaps it’s not a darker turn, but a more mature one, reflecting a greater appreciation for legacy and our short time to reach it.