From Stage to Screen: One of Dallas’ most original plays is becoming a homegrown movie. 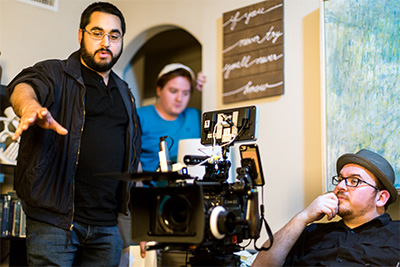 Director Ruben Carrazana, production designer Jeffery Bryant Moffitt, and director of photography Adolfo Cantú-Villareal set up a shot for the first scene of the movie.

Ruben Carrazana has never made a movie before. Yet when he takes the stage at the Texas Theater one hot night in early May, it’s to introduce the first 37 minutes of his film Stacy Has a Thing For Black Guys. The soft-spoken director and writer cautions the enthusiastic crowd that the rough cut is a work in progress: its soundtrack is a placeholder, the color grading is still being completed, and the levels aren’t all right yet. There’s still a lot to do, including further editing by Carrazana, before it can be put on the festival circuit and hopefully get picked up for distribution.

But the audience doesn’t care. Many of them are cast, crew, producers, family, and friends, but still more are fans of the source work. Carrazana premiered Stacy as a play in the summer of 2016 at Dallas’ Latino Cultural Center, produced by a now-defunct theater collective known as The Tribe. The contemporary satire — the new marketing slogan is “Get Out meets Who’s Afraid of Virginia Woolf?” —showed how we choose to avoid honest conversations with others (and ourselves) about sex, gender, and race in America. With razor-sharp wit and an intentionally uncomfortable title, the show centers on a white married couple and the black man who’s drinking lemonade in their living room and waiting for the evening’s agenda to start. It amassed local acclaim and was even nominated for the Harold and Mimi Steinberg New Play Award.

So why, two years later, turn Stacy into a film? “Why not?” answers Carrazana.

“My schedule was free from January through March and I wanted to fill it with something that I had never done before, and it needed to be something that was really difficult,” he explains. “My good friend Ivan Jasso is the one who said, ‘Hey, Ruben, you love movies. Why don’t you turn Stacy into a movie?’ And I paused for a second and thought, ‘Hm… I’ve never done that before and it seems absolutely impossible. Okay, let’s do it.’ ” 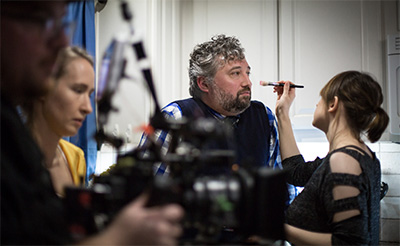 It was in Jasso’s house that Carrazana would end up filming for three weeks (a last-minute switch when the originally scouted location fell through), with his friend serving as the key grip/data wrangler; Jasso’s wife, Stephanie Cleghorn Jasso, is one of the producers. The cast and crew are comprised entirely of Dallas talent, some of whom are players from the stage version; others are approaching the project fresh.

“The name was enough to spark my interest,” says Madeleine Rose, who joined the film as head of makeup and hair. “After reading the script, I absolutely fell in love with the concept. Ruben took very fragile topics, such as communication, jealousy, sexism, and racism, and handled them with grace and humor. It is a narrative that is very important in today’s dialogue.”

Anastasia Muñoz, who plays Stacy (Alexandra Lawrence originated the role onstage), and Cleghorn Jasso were also fans from the moment they encountered the show.

“I thought it was the most brilliant piece of theater I saw all year,” says Muñoz. “It is so funny and uncomfortable without going overboard on the shock factor, which the older I get, the less interested I am in seeing.”

“You find yourself not knowing who to root for because each character is so flawed, but beyond the messy and broken desperation there is a glimmer of hope in Stacy and Harold’s wildly imperfect love,” says Cleghorn Jasso, “and I find that tragically romantic.”

Brian Witkowicz (Harold) and Christopher Dontrell Piper (Mac) each revisited their roles for the movie, working with Carrazana and original director Jeffery Bryant Moffitt (who transitioned to production designer for the film) to help re-adjust their characters for the new medium.

“Having performed primarily on the stage, I was nervous and excited to be a part of this project,” says Witkowicz. “Though we filmed mostly in chronological order, carrying the journey Harold takes was a bit more difficult this time — onstage we go through that journey in its entirety each night, but on film we shoot 8-10 pages at a time, so we have to get our minds back in the moment without trekking through the emotional arc.”

“With the stage version, the intimate space allowed us to have a certain level of theatricality in terms of the scale and size of the acting,” explains Piper. “With the film version, I felt like I didn’t have to do as much. I trusted the camera and the team.”

Changes for the adaptation were minor, with some made for practical reasons (it’s expensive to license a 50 Cent song!) and others to support the film’s slightly darker tone. Fight choreographer Jeff Colangelo was brought in to heighten the sense of danger during one scene that was originally played for laughs.

“When I wrote this, I was thinking of it as a play,” says Carrazana. “So much of why I think it worked is because the audience is actually occupying the same physical space as the characters, sitting in those ridiculously uncomfortable silences with them. In film, you have so much more control over the audience’s experience. I have to ask myself, ‘What is the most important part of this moment? Is it this actor’s face as they speak, or is it the other actor’s face as they listen, or is it the third actor’s hand on a glass of lemonade, or is it the turntable spinning in the background?’ ”

Director of photography Adolfo Cantú-Villarreal helped answer those questions, finding interesting angles throughout the small, single location and showing Carrazana how just tweaking a light could do wonders.

“It’s important to find collaborators, to keep creating and learning,” says Cantú-Villarreal. “Look for people that want to tell stories like yours, help each other create. Understand that challenges are part of the journey, embrace them, and then keep going.”

The film has been financed by Kickstarter, individual investors, and a grant from the City of Dallas Office of Cultural Affairs, which also funded the play’s original production.

“I expect my friends to have my back, but I’m so moved to see how an entire community has gotten behind this project,” says Carrazana. “I have no delusions that it’s because of me. I’m not that special. I just know how to put together a budget and a project proposal, and I listen to everyone’s ideas.”

After all, he’d even never written a play before Stacy and didn’t let that stop him either.