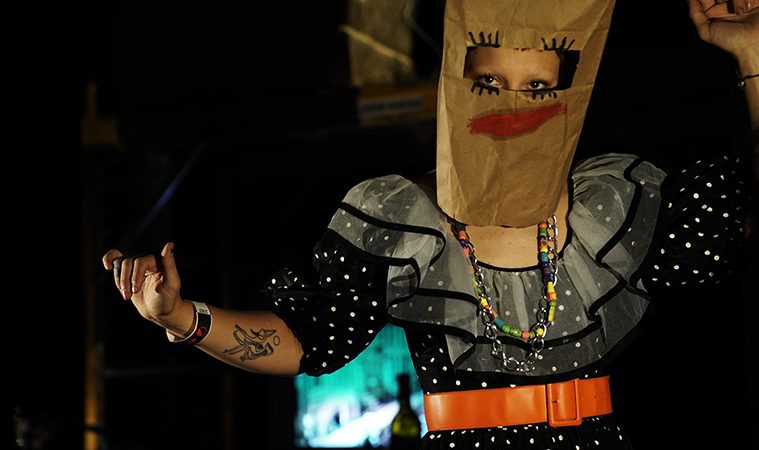 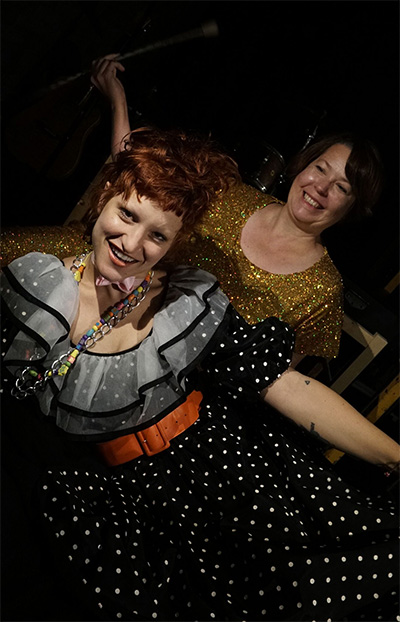 Girls, and boys, may just want to have fun on New Years Eve, but for many people the celebratory countdown to some second when the Earth has managed another full orbit around the Sun without getting struck by an asteroid makes for a pretty crappy holiday. The pressure to have fun or some yearly epiphanic life-accounting leads to either a night of overindulgence and a New Year’s Day of hangovers or an evening feeling everyone on the planet has found that fun without us. This at least appears to be the shared sentiment of writer/performer Traci Lavois Thiebaud and music director/composer Anthony Barilla, creators of delightfully strange Traci and Tony’s Unusual New Year’s Eve (at the Rec Room through New Year’s Eve 2017).

This sort-of rock opera, theatrical hanging out party, purports to be inspired by the infamous Cyndi Lauper 1983 (to 1984) New Year’s Eve concert broadcast on MTV. Yet, the whole enterprise feels more like a recreation of a 1983 party of geeky high school freshmen staying up late to bask and dance in the flickering Music Television light of Cyndi Lauper’s New Year’s Eve concert. I mean this as a compliment.

Thiebaud, dressed like a cross between Lauper and 50’s Lucille Ball, hosts this rock opera of oddness, but again, keeping with the nostalgia vibe of the evening, might also be playing the leader of a clique of arty, weirdo kids who somehow talked her mom into letting the whole gang stay up in the basement rec room until midnight.

Thiebaud, as the show’s writer, deconstructions some of the dialogue of the original MTV (still in its TV infancy) broadcast, while vocalist Cathy Power, sitting in one of two onstage beds throughout the whole show, sings her way through Lauper’s concert set list. The real treat of evening comes from Power’s voice and Barilla’s arrangement of the Lauper standards from her debut album, She’s So Unusual–barely a year old at the time of the concert–including “Girl Just Want to Have Fun,” “Money Changes Everything” and “When You Were Mine.”

What Traci and Tony’s Unusual New Year’s Eve lacks in a discernible narrative, the show compensates for with an atmosphere that somehow makes a party for the uncool kids so very cool. Catastrophic Theatre regulars Charlie Scott as Cook and Walt Zipprian as Clown argue, dance and take turns typing out New Years resolutions or perhaps treaties on an ancient typewriter. Everyone, including members of the audience, play a game of spin the bottle and later have a couple of spastic dance sessions. Choreographer and Suchu Dance director Jennifer Wood makes a special appearance and (spoiler alert) random baton twirling might occur. 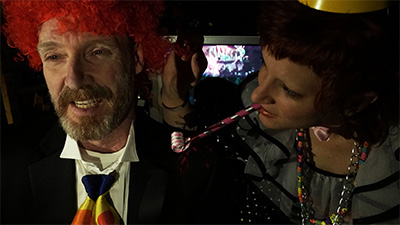 The party also slips in appropriate moments of melancholy as the evening and year wind down until reviving into 1984, or 2018 as the case may be. As Lauper ushered the New York crowd and everyone watching at home into the year Orwell had warned the world about, MTV was less than three years old and only about eight months younger than the Reagan presidency. At the time (after time) with her vibrant red hair, equally bright, fluffy crinoline skirts and wild makeup, Lauper probably did appear so unusually to fans and perhaps some scandalized parents.

Now as we head into 2018, the concert seems almost tame and wholesome. Yet even on an old static-prone television playing in the background, the concert still carries a message by example to those kids in 83, while Traci and Tony delivers the same inspiration to the jaded, weary audience of very late 2017: be true to your unusual, creative self and have a little fun whenever you can find it.