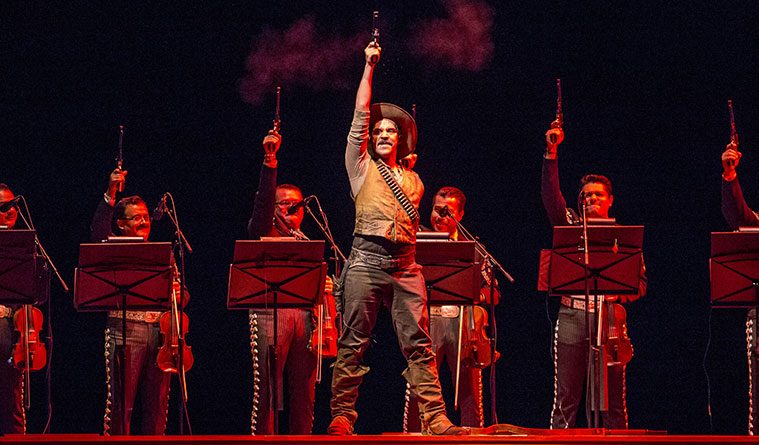 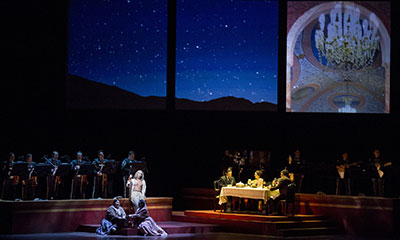 It’s springtime 1910, and night has come to a Mexican hacienda. Inside the mansion, the hacendado welcomes his son home from college in England. The farm’s laborers, relaxing after a long day’s toil, sing under the stars – until a blaze in the sky terrifies them.

The workers fear the apparition portends violence and bloodshed. The owner and his family, more educated, know the spectacle actually is Halley’s Comet. To them, the every-76-year visitor symbolizes the dependable world order that has paid off for generations of their family.

But the laborers’ intuition in the first scene of El Pasado Nunca Se Termina, or “The Past is Never Finished,” contains truth. Tensions between workers and landowners erupt into revolution, and the 90-minute mariachi opera shows it reverberating through Mexican and U.S. life right down to today. 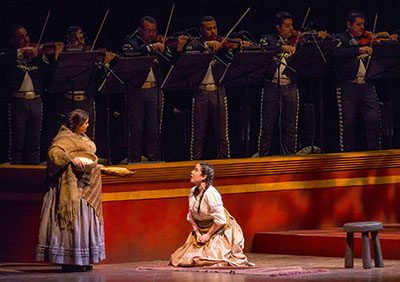 “The goal (of El Pasado) is to take a step further into the fusion of opera and mariachi,” Foglia says. If the combination seemed far-fetched when Anthony Freud, HGO’s former general director, proposed what became Cruzar, the results proved its power.

Cruzar, whose full title means “To Cross the Face of the Moon,” spans three generations of a family divided across the U.S.-Mexican border. Martinez’s melodious and glowing music reaches into the characters’ souls as they experience joy, loss and longing. Cruzar has won over audiences in Chicago, San Diego and other cities. When HGO took the work to France in 2011, Parisians’ cheers showed that it resonates far beyond its setting. 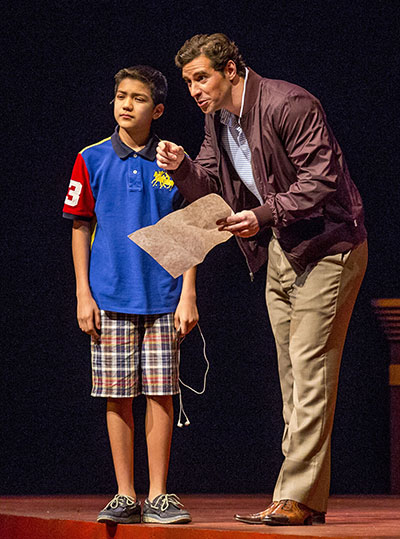 Centering on a man who left Mexico to seek a better life in Texas, Cruzar sidesteps illegal-immigration politics to zero in on human questions: Where is home? Is it the place we live now? The place we go back to visit? The place where our children were born?

El Pasado crosses boundaries and generations, too. The Mexican Revolution helps drive a fictional plot that takes off when the hacendado’s son falls in love with a worker’s daughter. Like the story of Cruzar, Foglia says, that of El Pasado began in his mind with questions that any of us may ask ourselves.

“When we all look in the mirror, what do we see?” Foglia asks. “Do we see our relatives? Do we see our past?” Though many Mexicans might pose those questions because they combine native and Spanish ancestry, the quandary transcends country or heritage. “We all have some kind of ethnic past,” Foglia says, “even if it’s English or Irish. … How much is your past going to influence who you are today? Does it mean anything? Should it mean anything? Are we one piece in a larger story?” In El Pasado, those questions begin to take living form when the young couple has a child. Echoes of the couple’s romance eventually reach a Mexican-American congressman and his son today.

“El Pasado Nunca Se Termina is an audience-grabber with heart, a show whose themes audience members can readily identify with, and a wealth of mariachi melodies to seal the deal. … Whether you consider it a full-fledged opera or an entertainment that’s poised between music theater and mariachi really doesn’t matter. What does matter is that Pasado seems well on its way towards becoming a classic of its genre.” 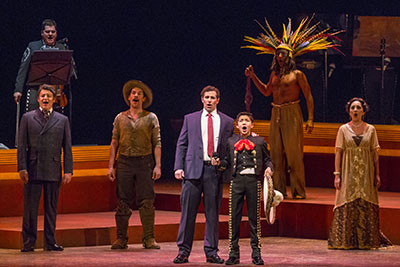 Foglia, who doubled as the opera’s stage director, thinks he and Martinez came closer to opera in El Pasado than in Cruzar. Whereas the earlier work unfolded largely as an alternation of dialogue and songs – reasonably enough, since songs with a beginning, middle and end are the essence of mariachi – the score of El Pasado is more continuous.

“We found a way to have longer musical arcs,” Foglia says. “We have some things that don’t conform to the normal mariachi way, which is kind of exciting. In the opening, we go from an ensemble number into a duet into a solo aria. It’s one big thing, because its the best way to tell the story. And sometimes (musical sections) are not songs – sometimes they’re just musical expressions of the moment.”

But even songs have their place in opera, Foglia says. If he had any worries about hewing too close to traditional mariachi form, they fell away one day during an El Pasado rehearsal at Lyric Opera of Chicago. “They were performing Tosca, and we were on a break. The feed (from the stage) was coming through in the rehearsal room. Cavaradossi finished his big aria, and the audience burst into applause. I thought, ‘What am I worried about?’” Foglia says with a laugh. The aria had the same effect on the audience as a mariachi song. “If that wasn’t written for that moment, what was? Puccini knew what he was doing.”