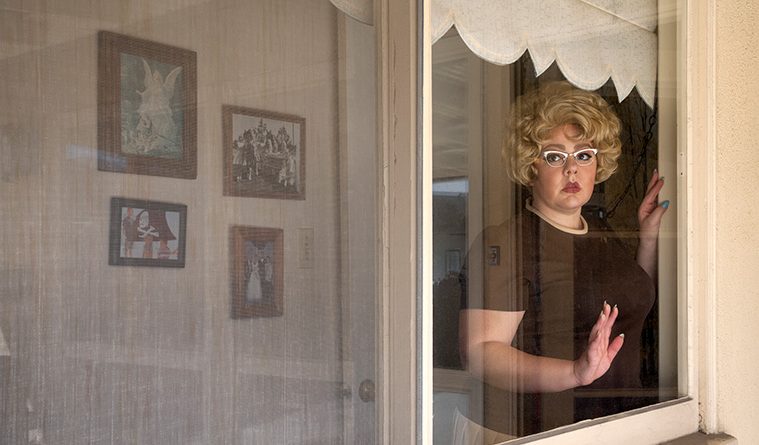 Tune your television to any station that traffics in perpetual punditry and count the seconds until you hear a sneering reference to the phrase “identity politics.”   Depending on your political leanings, it is either a powerful coalition-building tool or a worthless exercise in self-alienation. Anyone who needs to be forced out of those “comfortable” preconceived notions of identity should see Genevieve Gaignard’s exhibition In Passing at the Houston Center for Photography, on view through Oct. 22.

The work is all about identity, across race, class, gender, and time. Her lush and generous photos stylize and push hard on stereotypes both old and new, and the surprising result, is somehow an expansion of the nuance of self-identity. We feel that she is offering up an answer to the dreaded question addressed to many mixed-race people: “What are you?” The artist’s answer ranges between intensely vulnerable (intimately cinching her waist in Her) and defiantly masked (toting a McDonald’s bag with so much attitude in Drive By, Side Eye). It reveals itself in surprising ways over the several bodies of work exhibited in In Passing. The one constant in this sometimes perilously bold exhibition is the artist’s unmistakable Americanness.

Gaignard’s self-portraits can easily be compared to the work of Cindy Sherman—and she knows it. The Powder Room adopts an almost exact Sherman composition from 1981, with its character photographed from above lying face-up on a tile floor. It’s a telling comparison, because Gaignard’s character is outfitted with the overinflated bouffant and makeup mask of the drag-queen Divine, while Sherman’s takes on the more “natural” flush of adolescence. But Powder Room somehow feels less evasive for all of its stylization. There’s no ingenue being inducted into the first self-conscious stages of the “male gaze,” but rather an intentional repossession of that gaze by the artist. Even her hair is strewn about artfully on the pastel tile.

With Powder Room, the artist-as-Divine gives us a kind of “meta-wink;” the Sherman reference is an inside joke we’re all in on. But that close acquaintance with her references is less comfortable in Vanilla Ice, or Hoodrat Thongs, in which Gaignard’s characters draw heavily on “rural, white” and “urban, black” presentations. These iterations of the artist practically dare the viewer to challenge her inhabitation of these roles. Both are shot against the sides of buildings, familiar visions of the kind of strip-malls or box stores that inhabit both cities and rural areas, unlucky architecture that binds us all.

Another, more emotionally-bare example of self-presentation is the mixed media work Sexy Time, in which the artist includes a framed, grainy image of herself posing a la boudoir, a framed childhood photo, and a tiny cuckoo clock all mounted on a printed 1970s style wallpaper. Atop the work balance “mammy” and “uncle” figurines. The effect of these disparate images in one piece amounts to a neat summation of the entirety of Gaignard’s photographic work. She is the unaware young girl in the photograph whose very existence as a mixed race person will require reckoning in this world of strict color divides. She is also the vixen, hyperaware of her own self-sexualization. And she is the curator of all of these images, of “harmless” kitsch and nostalgia. She is all of these things and yet none of them fully, depending on which particular gaze she allows us to try on.

The largest work in the exhibition is the immersive installation titled Shotgun House, in which we are invited into Gaignard’s intensely stylized world. The house, in golden hues that seem further saturated by nostalgia (whether the artist’s or our collective culture’s is unclear), locates the crux of the artist’s struggle. Contrasting elements of “black” and “white” representation are sprinkled throughout the domestic scene. It is intensely tidy and suburban, infused with small elements that burn with charged meaning. Tschotschkes dominate, along with family photos, but placed in context with the rest of Gaignard’s work, the tension of her disparate identities brewing is palpable. A sign high on the wall of the “kitchen” side of the installation declares HIGH COTTON, a distinctly southern phrase used to describe good fortune. And yet the only “art” on the walls depicts a disaster scene—a flood.

Like Shotgun House and its assumed inhabitants, Gaignard has achieved a delicate but powerful tension with In Passing. She manages to humanize through stereotypes, and to achieve power through vulnerability. The most breathtaking feat of this show is the way in which the artist is able to inhabit something integral to the American spirit, a steady light that in today’s political climate seems increasingly wavering. She pushes beyond readymade descriptors like identity politics to find something closer to what it means to be a human woman in this specific place and moment in history. Her images are bold, and often uncomfortable, but their generous beauty invites us all to find the nuance beyond the facade.