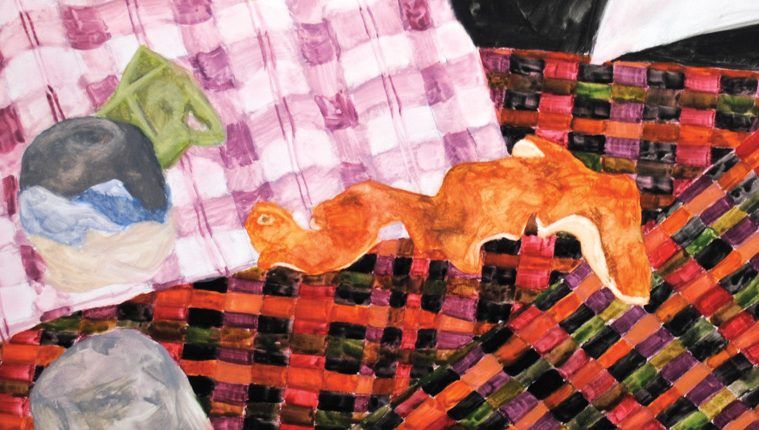 Getting (Not Too Far) Away From It All – To Work

For artist Nick Barbee, a two-year resident with the Museum of Fine Arts, Houston’s Core Program at the Glassell School of Art offered a studio in the shadow of an encyclopedic museum, invaluable professional connections, and plenty of contact with other artists. Sometimes too much contact.

“I definitely enjoyed interacting with some of the students at Glassell, but being in a school building, there’s a lack of privacy,” says Barbee, a Core Fellow from 2009-2011. “My studio had these big air vents, and you’d just listen to these classes while you’re working.”

Add that to what was then Barbee’s schedule including teaching as many as four classes a semester at the University of Houston, Rice University, and Houston Community College,  and doing installation work at the Contemporary Arts Museum Houston. It’s easy to understand what he likes most about the next residency he landed.

“There’s not as much traffic through here,” Barbee says of the Galveston Artist Residency and of the city it calls home. “It’s a lot easier to just make work.”

Indeed, the fledgling residency – Barbee, fellow Core alum Kelly Sears, and Brooklyn, NY artist Nsenga Knight are its inaugural trio, which aims to lure artists to Galveston by making a virtue of the relative lack of distractions, and by providing not just studio space, but a free apartment, a bicycle, and a stipend.

The studios, along with the GAR Gallery and Courtyards, which mount exhibitions independent  of the residents’ activities, are located in a pair of re-designed and rebuilt industrial structures on Ships Mechanic Row, about a block from the Galveston Arts Center. The apartments are in a historic building, which are a five minute walk away.

While the stipend is modest, director Eric Schnell says it’s possible in Galveston for a frugal artist with few expenses to squeeze by on it, an unthinkable luxury for Core Fellows, whose residency places a greater emphasis on juggling multiple demands, including working outside the studio. (Barbee has continued to teach during his Galveston residency, but on a less demanding schedule than during his Houston days.)

Himself an artist, Schnell cofounded GAR last year with Bert Geary partly to join efforts aimed at revitalizing a “post-Hurricane Ike” Galveston, but mostly because they thought the island seemed like a great place for a residency.

“I was kind of surprised there wasn’t one here,” says director Eric Schnell, who co-founded GAR with Bert Geary last year. “You can get around on bicycles, and it’s a sort of small-town, but you’re close to Houston. It’s a laid-back atmosphere.”

Knight, an interdisciplinary artist whose past residencies have been tied to specific printmaking or film projects, and for much shorter periods of time, calls Galveston “pretty peaceful and kind of simple, but not too boring. It’s still urban, but there’s the beach, and it has some culture.  The residency is very self-directed. You can just come in and go to the studio and do your work.”

Knight’s time at GAR has led her to try new things, both in and out of the studio, from reincorporating drawing into her practice, which has long been primarily photo-based, to checking out the nearby space center and immersing herself in June-teenth celebrations.

As they wrap up their residencies, Knight, Barbee, and Sears will present some of the fruits of their labors at the GAC, which agreed to host Galveston Artist Residency: The First Year – curated by GAC curator Clint Willour – when it was unclear the GAR Gallery would be ready to open in time for the July 14 ArtWalk. Since it will be, Barbee and Sears will present additional work in that space.

Schnell hopes the residents, who were chosen from a pool of artists nominated by a panel of independent art professionals, will notice a change in their practice as a result of their time in Galveston.

“(The residency) does take some of the pressure off, and I think it does encourage you to experiment more, because you’re hopefully having a little bit more free time to just sort of drift,” Schnell says. “I think that’s when you get those weird ideas you maybe would blow off when you’re really busy. My feeling would be that down the road, they’ll look at this as a time when something new started.”