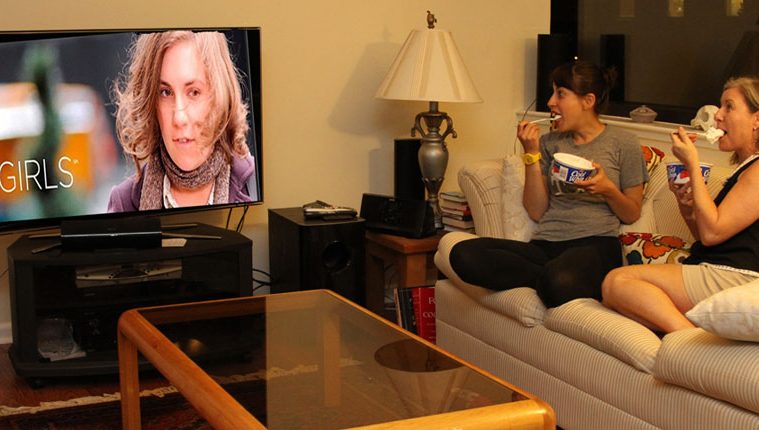 The Mystery of the Lena Dunham Hoopla Revealed or Not

It’s public knowledge that I’m a pop culture illiterate. There’s no point name-dropping with me about your fancy friends because, chances are, I have never heard of them. I was so curious why every move of writer/producer/Lena Dunham was covered to death that I decided to come out of my esoteric cave and check in with what everybody else is watching. I promise that I will go right back in when I’m done.

Listening to me go on about Dunham would have you screaming for me to go back in my cave, so I brought in Abby Koenig, a real live pop culture writer, playwright and A + C writer, to sort out the Dunham conundrum with me. We had fully hoped to commission puppets of ourselves talking about Girls with the video going viral leading to our own HBO series. Sadly, that didn’t exactly happen. But do enjoy our chat over buckets of Cool Whip.

A+C: Lena Dunham feels like a breath of real human air to me amidst the dreck on TV land. Plus, her film, Tiny Furniture, was really good. You did a little hatin’ on Girls. Fess up.

Abby Koenig: I did/do sort of hate Girls, as much as I cannot stop watching it. But on a critical level, I genuinely think that the characters on the show are thin and somewhat poorly written and kinds of jerks. They are getting better, but it’s hard to feel empathy for a character who you don’t really believe nor like as a person. I won’t lie, it might be a jealousy thing (wait, I was supposed to make a show about my crazy girlfriends and all the stuff we did in our 20s).

A+C: I am jealous too. I want to be Lena Dunham, or at least her mother, or Hannah’s mother. I would so write that girl a check. When Hannah’s mom screams “I want a lake house” in the pilot, I hear her pain. But back to you, what’s bugging you? Do girls right out of college not live in those swanky  New York apartments?

AK: Uhhh… no. I’m sure I’m going to sound petty, obnoxious and superior all at once, but I spent all of my 20s living in Brooklyn, specifically in the neighborhood where Hannah supposedly lives, and an apartment as nice as hers would cost around two grand; she works in a coffee shop, sometimes. And how is she affording all that Cool Whip that she is always eating?

A+C:  First, Cool Whip is magic. As for the nice digs, this is TV, no home for reality of any kind. My mom would have fainted if she had seen the bug-invested dive my brother lived in on the upper west side post grad school. Too much reality is not a good thing, even on TV.  Hannah is holy to me because she is a writer, and I want to protect her. I scream “Hannah don’t” “Hannah no” at the TV a lot. You are a writer, isn’t Hannah a tiny little bit holy to you?

AK: Oh yeah, definitely and she’s a woman writer to boot, which makes her more special to me. I think she has definitely captured something that needed saying about the current generation; twenty somethings are pretty clueless, and some of it is very endearing and then some not so much. I do want to yell at Hannah all the time. I want to yell a her for asking her boss to have sex with her when we all know he just wanted the occasional ass-grab, but then I also want to yell at her for feeling entitled and thinking she can say and do whatever she wants. I think my frustration is a sign of her good writing, but it is seriously frustrating.

A+C:  What? We can’t do and say what we want? Young women making smart choices would be a snooze fest. Bad decisions make good TV. Let’s talk about the bad sex on the show. I think they should show the first season in sex ed classes. We could put an end to teen pregnancy. Boom, just like that.

AK: Oye, the sex in Girls is so awkward and that’s what makes it real. I think this aspect of the show is a lot of what drew attention and Twitter feeds going. And let’s get serious, who has ever had amazing, movie star sex with someone the first time? And the reactions by Hannah and her girlfriends are so perfectly uncomfortable.

A+C: I love being made uncomfortable. I thrive on it. Girls is so good at that. It’s sublime awkwardness and possibly the secret to its success. Agree?

AK: Yes. It has done something that no other show has done, shown lots of truths. And the truth is usually agonizing to be around, especially when it is naked and not perfect looking like we are used to seeing.

A+C: Can I go all fake social scientist here for a minute? It’s fascinating to see how every episode is analyzed in depth. Trust me, we are going to see Ph. D. theses on this show. What does it say about our culture that we are so taken with a show about being made uncomfortable?

AK: Only 866,000 people tuned in for the Season two premiere, but by the way the media has been talking about this show you would think it’s the next Godfather.  Every few years, there is a TV show that comes out that just makes a mark with people. And Girls is so polarizing – you love it or you wish all copies of it would burn in a fire – that it gets people talking. And there is nothing else like it on TV right now. Louis C.K.’s show is smarter and funnier, but he’s not a 26 year-old, real-sized woman who doesn’t wear makeup and walks around in a thong.

A+C: You are on to something there. The real-sized kind of freaks me out. I’ve never seen anyone who weighs the same as I do on TV.  Normal people are supposed to be not perfect, not major Hollywood players. Perhaps the hoopla over Dunham’s every move is tied to that. Maybe she really is the voice of her generation.

AK: I think it’s a little bit of both. She is definitely the only person out there pointing out her generation’s foibles, and since she does it with comedy, it’s easier to swallow. But if she is the “voice” of her generation, it is a very white, well-off, highly educated, self-centered generation (get off my lawn!).

A+C: Oh, you are hard on my Hannah/Lena! Hey, Dunham got Hannah a black Republican boyfriend. Well now, I’m white, highly educated and self-centered. The well-off part hasn’t showed up, but any day now. I wonder if my weakness for Hannah and her kind is generational. I am the original hover mother. You are just a few years away from Girls lifestyle. I helped raise that generation.

AK: And I’m the angry Gen-Xer, latch-key kid who ate peanut butter for dinner and was raised by the drunks on Cheers. That might have a lot to do with how livid the characters’ personalities make me and, perhaps, my generation, who I would assume make up a good chunk of the people writing about the show. I know Hannah; I have a 26 year-old sister who does the same frustrating things… just with her clothing on.

A+C: But we neglected the most important question of all. What the devil is Adam doing in that apartment with that drill and goggles?

A+C: Or just freakin’ weird. I watched the last episode a few times. I imagine we were yelling different things at the train wreck that is Hannah at the end of the second season. I was telling her, “Sure, honey you can write a book in a day.”  You were probably yelling her at squandering a book deal. Am I right?

AK: Yes, exactly. I was so mad at her from the moment she threw up after she got the book deal. The last episode I was screaming at her, “Get it together! Eat a banana and get a coffee, you’ll be fine.”

A+C: The last image of Adam holding Hannah Pietà style stuck with me. You?

AK: He definitely spent all of the second season treating her like some sort of goddess. It was certainly romantic, almost in a Rom-Com type of way, like that scene in Crocodile Dundee when he is pushing his way through the subway crowd. It also had a sort of romance novel cover look to it. It was a lovely moment and a happy ending to a not very happy season, which means it will probably turn into a huge mess in Season three.

Charlie and Marne will definitely not stay together, but it might take a bit of time for their inevitable demise. I hope that Ray doesn’t disappear from the show because I think he is the best character. As for Hannah, I think she found herself in a really lonely place this past season, and is realizing that she needs friends and people who care about her (that outburst on Jessa’s voicemail was perfect) and Adam cares so… maybe she will let him stick around for a while. And then he’ll leave her for me.