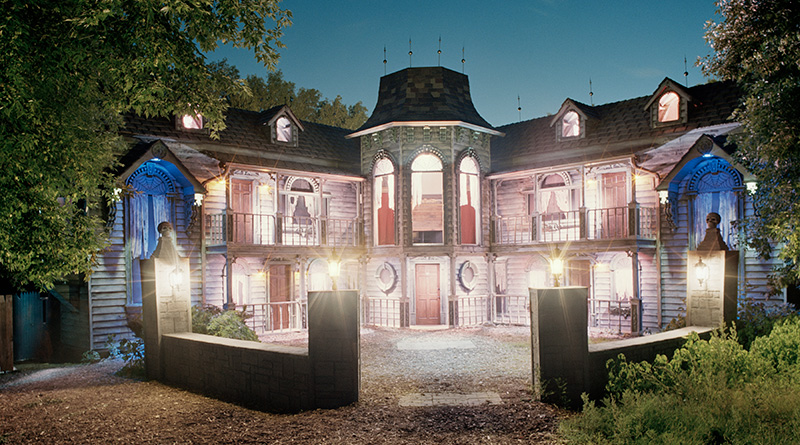 Haunting the Haunted: Misty Keasler at the Modern Art Museum of Fort Worth

An interest in what isn’t shown in a photograph is a relatively recent preoccupation among art audiences. We assign a crucial importance these days to discussing what a photographer might have left out of an image, often defining what we see but also what we don’t.

Another necessary aspect of an image not present in the finished product is the sensory environment of its subject. “This is a real limit of photography,” Dallas-based photographer Misty Keasler notes. “There’s no way to capture a truly immersive environment in a single image.”

These limitations seem to be exactly where Keasler’s photographic projects begin. She’s photographed a landfill in Nigeria, the elaborate sex hotels of Japan, and various aspects of the Las Vegas strip—all places drenched in highly nuanced cultural meaning and sensory immersion, elements that just aren’t easily ascertained in the one-dimensional photographic image.

Haunt, on view Sept. 23 through Nov. 26 at the Modern Museum of Fort Worth, is a collection of photographs taken at haunted houses across the United States. The show is Keasler’s latest stab at capturing the elusive nature of some of our world’s most artificial yet spectacular physical environments.

Keasler began frequenting haunted houses a number of years ago with her husband, and—perhaps unsurprisingly given her conceptual interests—she became fascinated with the haunts (as Keasler calls them) after a visit to Thrillvania, an especially absorbing haunted house located in Terrell, Texas.

“It was in a league of its own,” she says of the house. “Even though you knew people were going to jump out and scare you, I was just so absorbed in the environment.”

She used the premise of a magazine article to get access to extensively photograph the ins and outs of the house ,and the project grew from there to include photographing 13 haunted houses across the United States. The results of the project, in addition to the show, are collected in an art book published by the brand new Archon Projects, a boutique publisher of contemporary art books based in Texas and run by Dallas gallerist and designer, Brian Gibb.

It seems appropriate to mention, if it isn’t obvious, that all haunted house experiences are not created equal. Keasler notes that until her visit to Thrillvania, the houses she had visited were a mixed bag in terms of design value, fear factor, and spectacle. For her project, Keasler sought out haunted houses that were at the top of their field and the owners of these “elite” houses were instrumental in bringing the project to fruition, assisting Keasler in scouting locations and gaining access.

“One of the ways you can think about photographing these houses as an artist is to show the wizard behind the curtain, but I feel like that’s just a one-liner and then you’re done.”

Instead, Keasler worked on finding ways she could convey as much of the experience of the house as possible within the limitations of her medium. “These places are really scary,” she says, “They’re scary in ways that aren’t just visual.” She references one house in which she couldn’t shake off an overwhelming sense of dread, even with the lights on and the artifice exposed; after asking for earplugs, she realized the designers of the house had included what she calls a “fear frequency” in the audio piped in through speakers, an audio frequency designed specifically to evoke an eerie feeling of unease.

Keasler worked to express these other aspects of the complete environment in a number of ways including extensive post-production work, playing with the lighting and clarity of the image to express what it actually feels like being in the house, not just its visual reality. In fact, she’s quick to add, her photographs often don’t look anything like what you see in the space itself.

“This is where the photographs have to really operate on a different level than the haunted houses do; if you can make an image pregnant with tension, where something is a little off, you can sort of push this level of dread,” she says. “A lot of the images that work the best for this are looking at the edges of things, that way you can kind of move away from the thing that is.”

The show features 40 interior and exterior images of the haunts, many of which offer just the tiniest slice of a complete scene. Although she worked hard to evoke the feeling of the haunts, the images aren’t always brimming with spectacle, more often they’re subtle and serious, trademarks of Keasler’s style.

“It’s interesting that we take pleasure in this kind of darkness,” Keasler says when asked about ways she thought about the haunts place in American culture. “The fact that we’re drawn to haunted houses in our leisure time indicates that we live in a very safe environment.”

“Our culture’s fascination with the actual monsters in our lives is fairly telling about us,” she says. “Haunted houses are really reflections of what we fear the most.”