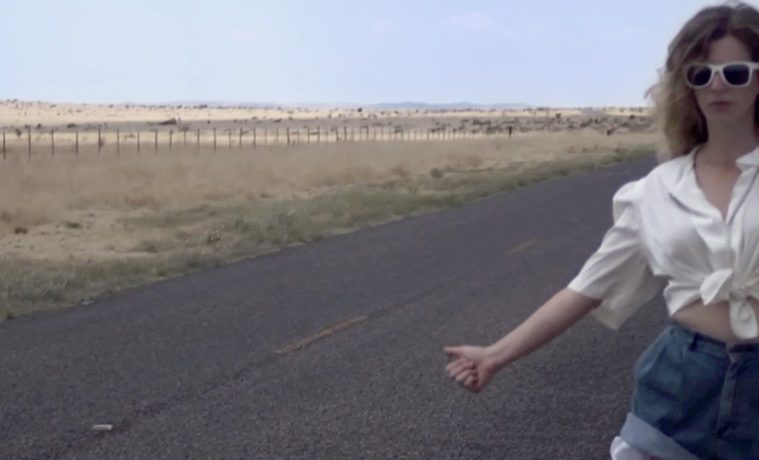 IMAGE ABOVE:  From North of South, West of East. 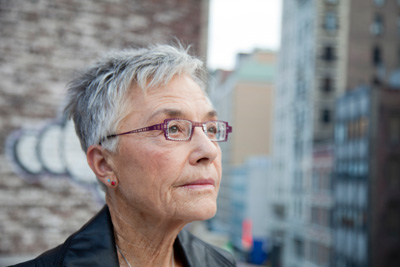 I can’t say whether it was the best Houston Cinema Arts Festival yet, but it was my best festival. Why? I did some homework—always a good idea if time is limited. I also got comfortable with the fact that there would be excellent films and events that I would miss and hear about later. Why be overwhelmed when you can be happy with the film in front of you?  Sometimes, I made decisions based on an insider tip; other times, because of the Sprinkles cupcakes down at the spacious HCAF headquarters. I could very well be getting this film festival thing down.

Every year, there is one film or event that stands out for me as an anchor experience. Last year, it was Phil Solomon’s American Falls, a stunning film that I visited often during the five days. This year, Barbara Hammer’s two portraits of women artists, Lover Other and Maya Deren’s Sink, took that honor. Hammer’s immersive documentary style takes us into the worlds of these artists in such a way that we feel tethered to their lives. In Lover Other, the story of Claude Cahun and her girlfriend and lover Marcel Moore is revealed as Hammer revels in their completely original body of work. Both films are sensuous and dreamy, while fully evoking a sense of location, which was especially true in  Maya Deren’s Sink. That fact that Hammer was in the room with me during the screening added to my star-stuck experience.

Jonas Mekas, another giant of the avant-garde, came to town for a showing of Sleepless Night Stories and for the opening of Life Goes On…I Keep Singing, at Deborah Colton Gallery, which features Fragments of Paradise, a video created especially for the exhibit. Also on view are many stills from his iconic films and the eerie WTC Haikus, Mekas’love poemto the World Trade Center, an inseparable part of his life during his time living in Soho. The exhibit continues though Dec. 28. 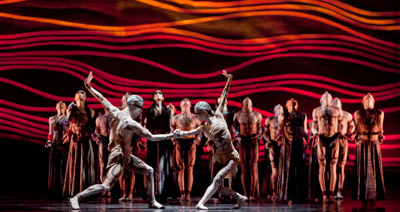 Houston Ballet in Stanton Welch’s The Rite of Spring.
Photo by Amitava Sarkar.

A line around the block at the MFAH for the Houston Ballet: Breaking Boundaries documentary showed serious hometown team support. John Carrithers did a marvelous job condensing 40-plus years of history into an hour, allowing room for some vintage footage of Ben Stevenson in China, Debbie Allen’s early years with the organization and excellent coverage of the brief, but stirring 1970s, with the mysterious James Clouser at the helm. Who knew that the first rock ballet came from Houston? Carrithers managed to meld the stories we know with little known trivia about the organization. The documentary most comes alive under Carrithers’ dance-loving eye in the scenes of the company in motion today. Overhead shots of La Bayadere and wing shots of Stanton Welch’s The Rite of Spring let us breathe in ballet in all of its treasured glory. I could have seen more of that. I highly suspect this will not be his only foray into dance.

Requiem NN, by acclaimed Colombian artist Juan Manuel Echavarría and produced by Houston resident Margarita De la Vega-Hurtado, revealed a more understated documentary style. Only the occasional sound of water accompanies the tales of the people from Puerto Berrío, who have adopted the dead bodies found in Colombia’s Magdalena River as a kind of spiritual kin. Their tales of keeping alive the memories of the disappeared is solemn,  poignant, and speaks to the resilience of the human spirit in the face of continued violence. An exhibit of Echavarría’s photographs at HCAF headquarters made for a moving accompaniment to the film. 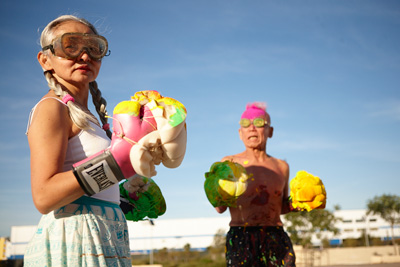 Cutie and The Boxer.

There were times I thought HCAF should be called “the tragedy of being an artist” film festival. Cutie and the Boxer,  Zachary Heinzerling’s whimsical film, chronicled the difficult lives of Ushio Shinohara and Noriko Shinohara.  Heinzerling’s unobtrusive camera lent a gentle presence. As Noriko joked during the Q & A, “Zachary became like an object in my apartment.” More artistic unhappiness could be found in Persistence of Vision, Kevin Schreck’s heartbreaking saga of Richard Williams’ (Who Framed Roger Rabbit?) stillborn masterpiece, 25 years in the (not) making. What a reminder that finished is better than brilliant any day. Even Big Joy: The Adventures of James Broughton pointed to the folly of artists’ self-centered lives. Broughton—the great pioneer of experimental cinema, poet, and bard of Gay Liberation— is brought into full view by directors Stephen Silha, Eric Slade and Dawn Logsdon. 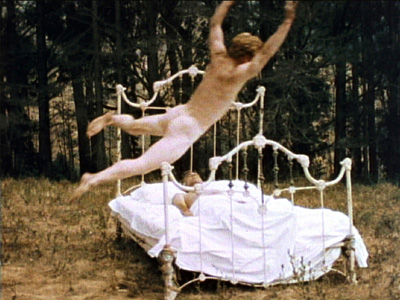 Still from Big Joy: The Adventures of James Broughton
Photo by Bill Deslo.

Audiences experienced Meredith Danluck’s intriguing four-screen film, North of South, West of East, in swivel chairs. It proved as interesting to watch the watchers as the film itself, which set off on four separate narratives that cleverly culminated at the end. Danluck employed our eroding attention spans to good use in her deconstructed narrative.

I appreciated the gentle and crisp charm of The Love Songs of  Tiedan, Hao Jie’s tribute to a rather unsubtle form of Chinese folk singing. The film just revels in its oddness, making it a fitting way for me to wrap up a day in the dark.

Alexander Payne’s bleak Nebraska could possibly the ultimate holiday movie. It features crusty old men, a bitter, cranky mom, awkward cousins, strained family get togethers and enough regret to fill a Nebraska cornfield. Bruce Dern should get an Oscar for his raw-to-the-bone portrayal of Woody, the boozed-out father, who believes he has won a million dollars. Will Forte delivered a spot-on stoic performance as his dutiful son, Dave. Forte and producer Ron Yerxa were both in town for the Festival.