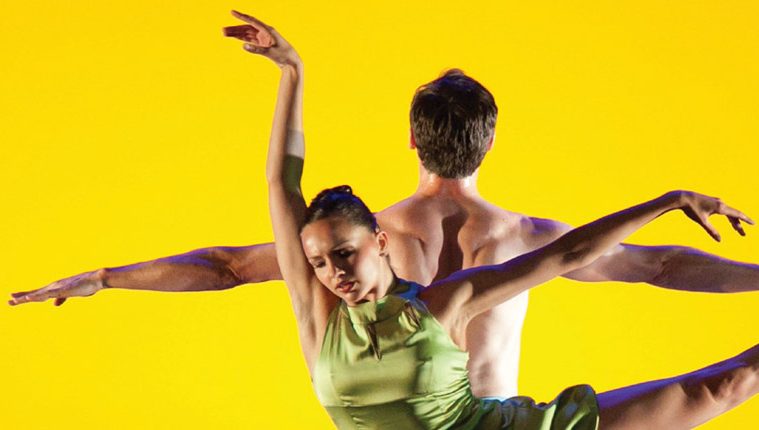 Imagine a ballet company that exists in two cities, doesn’t go near a classic story ballet, cultivates groundbreaking choreographers before they become famous, presents other dance companies and has an award-winning folkloric outreach program.

Aspen Santa Fe Ballet (ASFB), making a pit stop in Houston on September 29, is all that and more.

The company has carved out a unique position in the ecology of ballet companies. Small and nimble, they have been able to fashion their own identity, drawn the vision of founder Bebe Schweppe and co-directors Tom Mossbrucker and Jean-Philippe Malaty, both former Joffrey Ballet dancers.

“We were a total start up,” recalls Mossbrucker. “There was nothing here, no notions of what a ballet company should be like.” Being free of producing the old warhorse story ballets allowed the company to dive head first into contemporary work. That fact gave Mossbrucker and Malaty the freedom to start from scratch. Today the company is known for their eclectic repertory, fearless dancing and dual-city lifestyle.

The company moves into its 17th year with a streamlined approach. Finding the best choreographers is high in their mission. “We are like a think tank for choreographers, although we don’t have a resident choreographer position, we do develop long term relationships with certain artists,” says Mossbrucker. The company has nine ballets by Nicolo Fonte, who just premiered a new work on Houston Ballet last season, and several from Jorma Elo, including four commissions.

ASFB has had so much experience with Elo’s choreographic imagination, they look so at home in Elo’s wild contours, mining its fantastical aspects with knowing bodies. “One of the key tenants is the look of the company,” says Mossbrucker. “So many of our dancers have been with us a very long time. They are so committed.” The company also boasts some new recruits, including Peter Franc, formerly of Houston Ballet.

Jorma Elo’s Over Glow, a work for six dancers, anchors the Houston program. “Jorma knows the dancers so well, he really honed in on their strengths, who they are as artists,” says Mossbrucker. ” And he’s right, no one quite dances Elo’s work like ASFB, his style is in their DNA.

Elo uses music by Mendelssohn and a middle section with Beethoven’s Violin concerto in D minor. “It’s not typical of Jorma, it’s almost classical, and so tender, there is bit of story going on, too, which is really unusual.  It’s my new favorite ballet.”

ASFB is also performing Juri Kylian’s Stamping Ground, a work rarely seen in the states. “It’s primal, animalistic, yet contains a dollop of wit. Expect to chuckle,” quips Mossbrucker. “I also like that Elo worked under Kylian, so there’s this link to the next generation.”

Alejandro Cerrudo’s newest ballet Last rounds out the program. Cerrudo is a resident choreographer for Hubbard Street Dance Chicago and has been a rising presence on the dance scene. His work runs the gamut from vaudevillian comedy with ominous overtones to inky darkness from which dancers appear or disappear without warning. It’s always intense and highly theatrical.

Unlike larger companies, ASFB has the flexibility to be who they want to be. In addition to the company, now touring 22-30 weeks a year, they have a school in each city and also present major dance companies. Mossbrucker describes the mission in a broad stroke.  “We are not just one thing, a lot happens under our dance umbrella.”