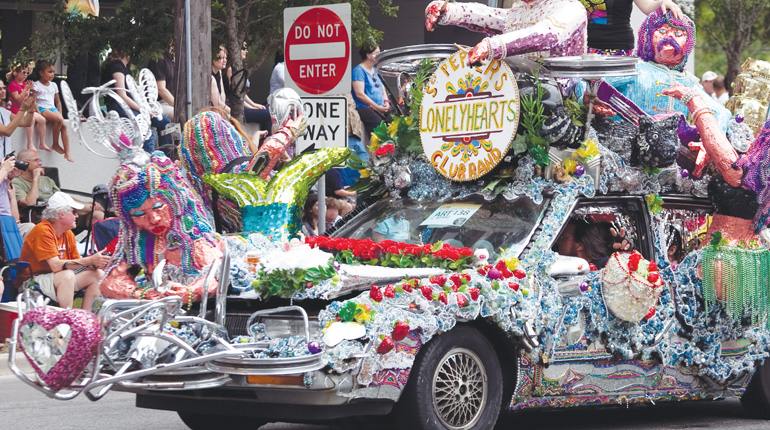 The giant roach car. The one that looks like a dragon. The one with all the fish and lobsters on it. These are just some of the rolling sculptures that cruise through Houston’s downtown every May as part of a beloved tradition known as the Art Car Parade.

This year’s 25th annual Art Car Parade, for sale which is powered by the Orange Show, is an art-on-wheels extravaganza that’s just one part of the weekend filled with wild revelry, funky self-expressionism, and an unabashed love for folk art.

“These are all just amazing, colorful, completely unique pieces of art,” says Jonathan Beitler, spokesman for The Orange Show. The folk art institution is the umbrella organization for the parade. The Orange Show dates back to 1956, when its founder, Jeff McKissack, built an eclectic celebration of the orange, his favorite fruit. Today, the museum on Munger Street attracts visitors looking for the weird and the cool. The whole building, has mazes and balconies and is a love letter to sculpture built with reclaimed items. It has everything from bricks to tin sheets, and images of the orange abound.

“Every corner has its own story,” says Carol Simmons, who serves as the volunteer coordinator for the space.

The same can be said of the cars that make up the parade. The Orange Show Foundation commissioned the Fruitmobile in 1984, a cheeky nod to the Orange Show’s patron citrus. In 1988, the Show teamed up with the International Festival to launch the first art car parade. Today, many of the folks associated with the event laugh over its humble beginnings.

“Oh, that first year, we had maybe 40 entries and a couple hundred spectators,” remembers Barbara Hinton, one of the Orange Show’s board members.

This month, expect several thousand to line the streets along Allen Parkway to catch a glimpse at the 266 entries that have descended on Houston from as far away as Minnesota and California. Hinton says she loves seeing the cars pass by, and really appreciates the joy and delight on spectators’ faces.

“The parade brings such a diverse group of people out,” she says. “Not just the artists themselves, but also people who come to watch the parade. They’re from all over.”

“This is all about folk art and visionary art,” says Simmons. “And it’s a great way to get art in the hands of the public without any pretentiousness or stuffiness to it. It’s just plain fun.”

Anything that rolls on wheels is a welcome entry to the Art Car Parade, whether it’s an old clunker dressed up with fountains and paper mache animals, or a little red wagon tricked out with motors and bright colors. It’s also a lot of work to create one. Just ask Rebecca Bass, the Houston Independent School District art teacher who’s made 27 cars for the event, many of them with her art students.

“Making the car teaches them about creativity, project management, and how to work with other people,” she says. “There are fantastic life skills they pick up, and the kids really love it. Of course, they never quite realize just how much work is actually involved.”

This year’s project is called Earth, Wind and Fire, and students from five of Bass’s classes are involved, and will also collaborate with the kids in fellow teacher Pamela Garner’s robotics class. The $500 car features a waterfall, hydraulics and fog. Bass says her students are part of the whole process, from drawing plans, to making a model sculpture of the car, to fitting all the pieces together.

As of press time, Bass and her students were still painting and welding. So was artist Mark “Scrap Daddy” Bradford, whose workshop hummed with the sound of saws and blowtorches.

“I’m changing out a motor,” he explained. “The car got so heavy, I needed to switch out to something that could better handle the weight.”

Bradford’s car will be his thirty-third. He saw his first art car parade in 1987 and was hooked on the idea of these wacky sculptures on wheels. He made his first parade entry in 1988 with what he calls a “crazy motorbike.” And the rest is history.

“I like to bring the metal to life,” he tells me. “All of my stuff has some kind of nature representation in it, whether it’s an animal or a growing thing.”

This year, he’s rolling out Mr. Green, an homage to recycling that’s made with nearly 100 percent recycling material.

“He’s like an ox, pulling a cart,” Bradford says of his 13-foot-tall creation. “And I’m driving him.”

That may sound off the wall, but Beitler says that the cars are not only well-loved by parade-goers, but some have also been coveted by collectors and shown in museums all over the world. One of Bradford’s cars was shown in Germany, and several artists’ cars are on display through the Orange Show. Many Art Car fans, including the artists themselves, eagerly anticipate the new pieces by returning creators.

“I’m looking forward to see what David Best and Kenny Browning come up with,” says Bradford. “They’re just great and I love their stuff.”

Hinton is excited to see Bradford’s Mr. Green. She also loves The Sashimi Tabernacle Choir, the car with all the fish and lobster mounted to it.

“This event is the greatest way to experience art without even realizing it,” says Simmons.

The Orange Show does all it can to ensure that art comes to the people. The Friday before parade day, Main Street Drag brings many of the cars through the streets of the Galleria and the Texas Medical Center, both to whip up excitement about the parade, but also to allow school children and people in nursing home and health care facilities to experience some of the wonder and creativity. That evening, the cars will be lined up in the streets around Discovery Green Park, allowing visitors a chance to see them and talk to the artists. The parade starts at 1:00 p.m. on Saturday, May 12.

“Come out and experience it,” raves Hinton. “This whole thing takes art off the walls and out into the street.”

— Holly Beretto
Holly Beretto participated in the Art Car Parade once, dressed as a Valkerie on roller skates, part of the entourage for the Houston Grand Opera’s art car.