Two of the central artworks in Mel Chin’s latest exhibition, Inescapable Histories, on view at The Gallery at UTA through March 30, are diptych paintings of a circular shape, resembling a solar body. Together they are titled, The Persistent of Emanation of Denial and Disease Waking the Enduring and Deepening Hue of Resistance, and in the artist’s description, “They have an eye-like form, responding to the Wide Awakes…an 1860s movement of [Union] soldiers offended by slavery.

The Wide Awakes, whose flag featured a single open eye, were suspected of collaborating with enslaved people in a fire that devastated downtown Dallas in 1860. Misinformation and rumors spread by local newspapers led to the lynching of some 30-100 people in North Texas that year, as well as the militarization of white reactionary groups that presaged the rise of the KKK, in a series of events later referred to as the Texas Troubles.

A familiar adage says that history doesn’t repeat itself, but it does rhyme. In 2022, with online screeds about the “woke mob,” vigilantes escaping justice, and misinformation amped up to a fever pitch, the historical “rhyme” in Chin’s piece is practically limerick-like in its obviousness…if only history were that accessible. According to the artist, events of the past several years have “maybe also exposed the way America truly is. Deeply divided, resistant to science.” He says it has “confirmed the work that needs to be done.”

­­­
Speaking as a person educated in a suburban Dallas classroom a mere 130 years after the Texas Troubles, until lately I could have told you a lot more about Davy Crockett’s hat than about this antebellum instance of mass murder. Which is why these pieces, in this location, at this moment, feel like what Chin likes to describe as “a catalyst.” He explains, “I use the word ‘compel’ much more than ‘inspire’.” As an example, he references a 2018 collaboration with the people of Flint, Michigan, and designer Tracy Reese, among others, to create fashionable garments constructed out of recycled water bottles. The project, later exhibited at the Queens Museum, was an example of what Chin refers to as the “catalytic possibility of a work of art. [A] platform for language that doesn’t even exist yet.” The thousands of water bottles are a symptom of Flint’s ongoing necessity of importing bottled water due to infrastructure failure under the political neglect of a corrupt local government. Chin’s project was “not about solving the lead crisis but offering hope.”

Because the intent of the work is “action to provide an option,” Mel Chin is devoted to ideas over medium. He is simultaneously dedicated to his craft and clear-eyed about its limitations. “I don’t know if art can do that much. Art should not be about power. It’s interesting that people talk about how much it costs, the value of it depends.” He says, “You have to put everything in a piece, that it can emanate all these thoughts.”A simple Google search of Chin’s work will reveal dozens of projects in locations near and far with collaborators and media of all kinds. “You can make art almost anywhere,” he says. “Being largely a conceptualist…there might not be a consistent marketplace.” His studio practice is one of “being reactive and being compelled.” Like some other artists over the last two years, the pandemic provided an unexpected, but not unwelcome, lull. “The pandemic was a luxury because I didn’t have to travel. It was a different kind of schedule, time to think about what might be important.” 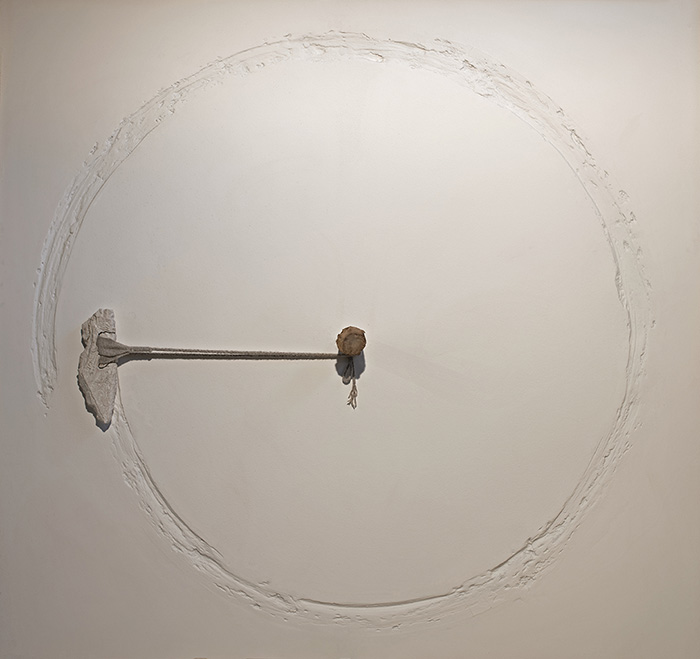 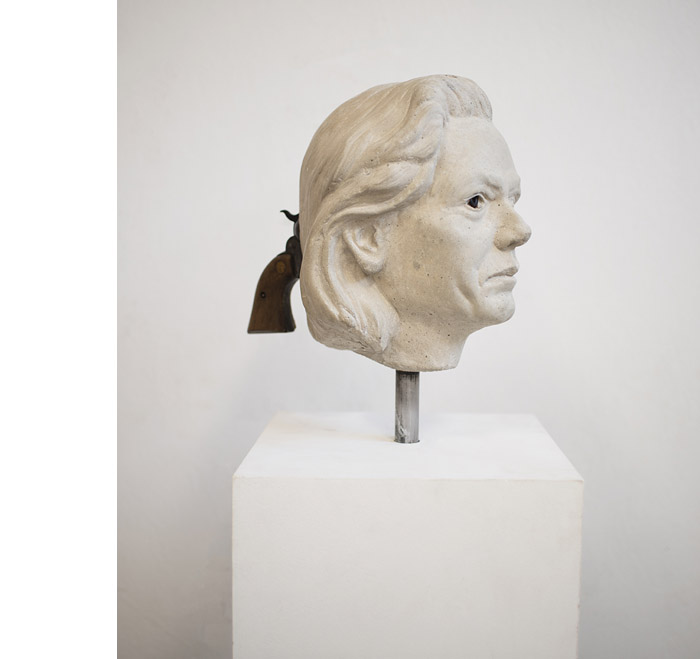 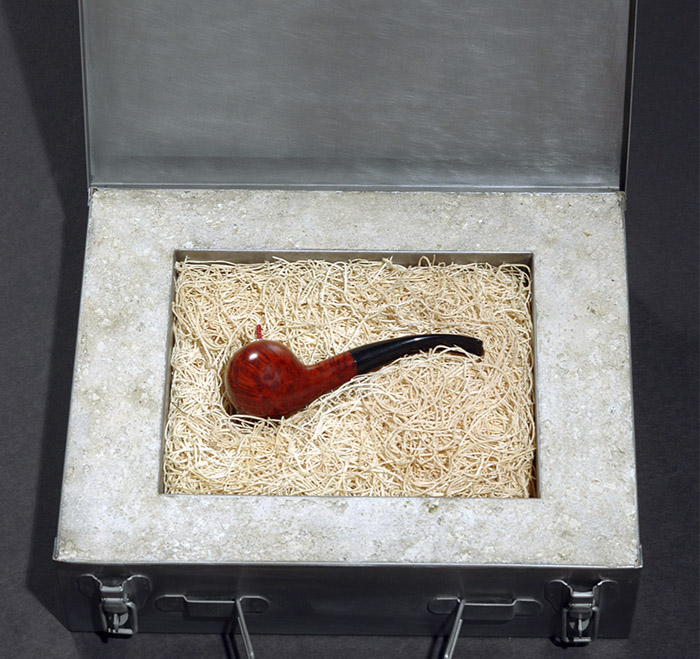 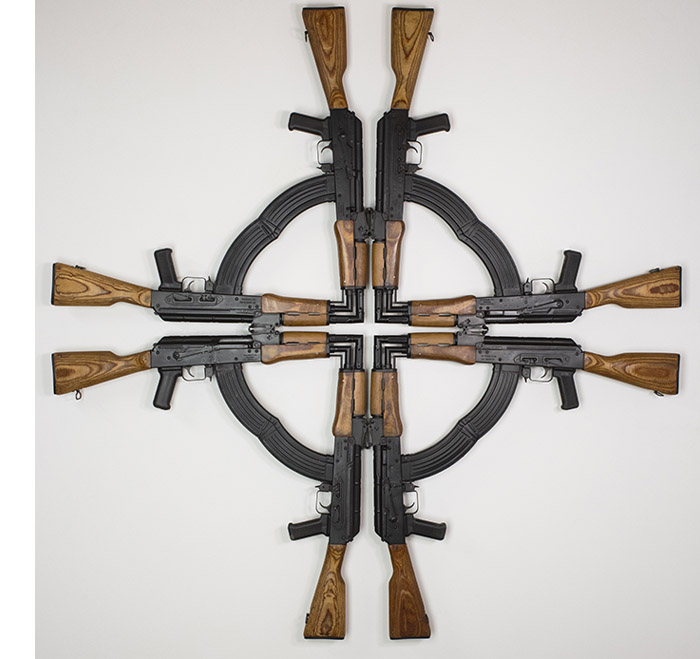 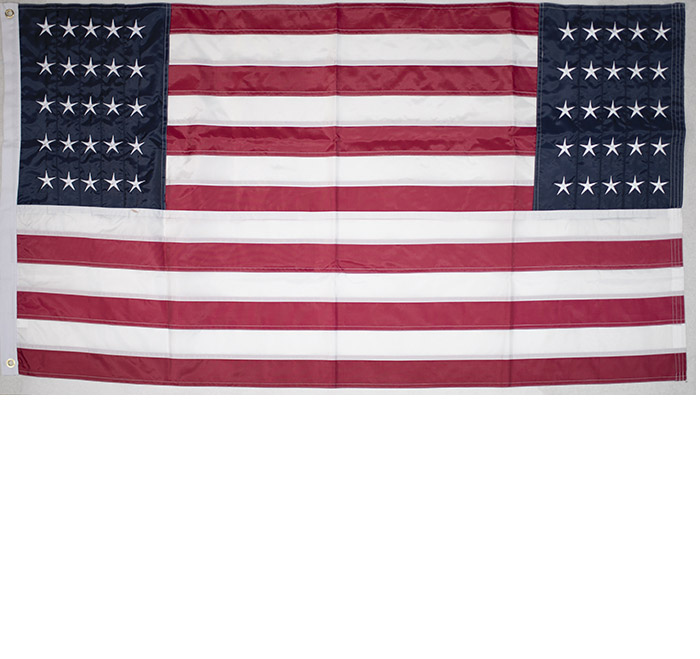 Although Inescapable Histories features works from several eras of Chin’s career, it is not a retrospective in a traditional sense; a better word might be recurrence. Like the historical echoes he references in the individual works, the show itself echoes Chin’s and curator Benito Huerta’s collaboration from 2005. “We haven’t yet escaped each other’s history,” Chin says vaguely, a statement which may be seen as a reflection of the long-running relationship between curator and artist or unfurled to envelop the entirety of our national story. “Working with a friend is great. It’s lucky to have someone who understands,” he says.

“The world is full of upsetting things,” Chin muses. The past several years have given us “a very honest approximation of where we are,” he says, refusing us “this delusion of symbols.” Prominently featured in the exhibition is Flag of America (with 25 stars on each side), a banner of red and white stripes with two polarized blue fields of stars in opposing corners. Chin is adamant that “systems that are inadequate to give us our full options,” and art is a way of thinking ourselves outside of those systems. Like a rasp delivered to a prisoner inside a frosted cake, it offers us some means of escape. It should, “provide us with options we didn’t know we had before.”

For his own part, Chin seems open to any option that might present itself. “I really don’t know what I’m going to do next. I put myself in a position of not knowing.” He says, “From my point of view, I’ve tried to adopt a state of becoming. I don’t think I should be done. It’s a mutational force.”