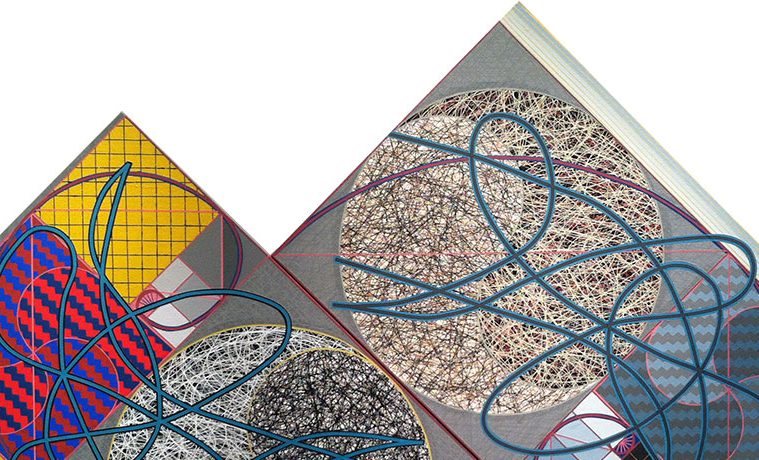 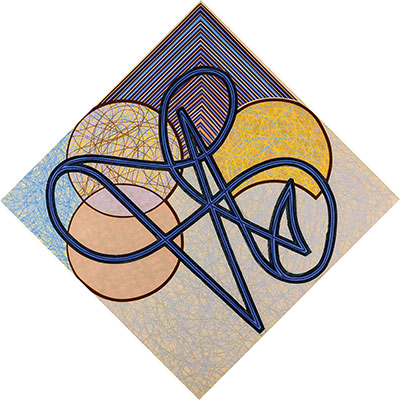 A long time ago in a corporate office not too far away, HJ Bott developed a formal system that would serve as the source of his visual interpretations for years to come: the Displacement-of-Volume System Concept, or DoV for short. Since its inception, he has used this system of multi-dimensional forms to express views on a wide variety of sociopolitical and anthropological ideas. Currently on display at Anya Tish Gallery, Bott’s exhibition Scribble Morphings is proof that the artist has been honing this method for over 40 years.

Entering the gallery, visitors are presented with exactly what the exhibition title promises. Panels and canvases adorn the walls, and these square and rectangular grids house their own series of shapes and lines. The “phenomenon of the line” is something that Bott has been exploring, or more accurately, preoccupied with, for decades. For him, a line is like a vehicle through which he can navigate complex issues, dealing with angles and curves that are in perpetual opposition. Within the grids, the variations that represent the underlying ideas are facilitated by Bott’s use of mark making.

A prime example is Bott’s Artisanal Redistricting (No Clean UP Here). One of the many diamond grids on display in the exhibition, this piece hosts a series of overlapping circles that group together a variety of fleshy hues penetrated by pink scribbles that break through these groups, or districts as it were. Through this piece, the artist addresses the issue of gerrymandering – a tactic of manipulating the boundaries of electoral districts used by some groups to gain a political advantage. The title of the piece, as with many of his other works, provides a clue to Bott’s intent, but for most visitors the meanings remain hidden behind his self-proclaimed “Baroque-Minimalist” techniques.

His tastes and background are diverse. A painting could be about anything from the ecological instability of the world brought on by the human abuse of the environment to a mathematic yet artistic interpretation of how a fourth of a square can be both curved and angled. Without knowledge of Bott’s intent for each work, or that his DoV system has been driving his work for four decades, visitors might find Scribble Morphings to be easily dismissible. His refined aesthetic can undoubtedly draw people in, and it’s obvious to anyone that each line is well thought-out and carefully placed. 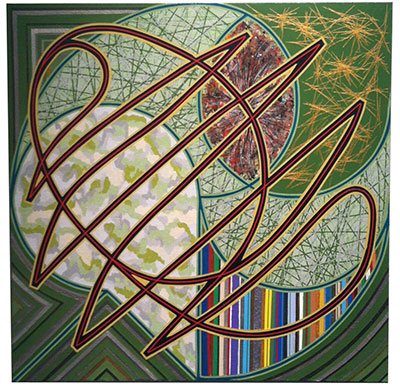 The works presented in Scribble Morphings expand on the idea of the scribble, specifically the “24 Basic Scribbles,” which are supposedly the fundamental marks found in the drawings of children as well as the building blocks that form written and visual language. The influence of these scribbles is clear, but they aren’t the sole focus of the artist’s aesthetic.

It’s apparent from the moment one lays eyes on Bott’s work that he’s a sort of mad scientist, or perhaps a mad geometry teacher if such a thing exists. The artist is obsessed with lines, shapes and the way the two interact. Visually the works all feel similar, which is unavoidable when an artist hones in on a single idea or method, repeating it throughout multiple pieces. A closer look, though, reveals how distinct each piece is. While Bott focuses intently on the use of lines, they in no way limit his work. In fact, they allow him to form a seemingly limitless variety of shapes and symbols, especially in his method for making use of the scribble.