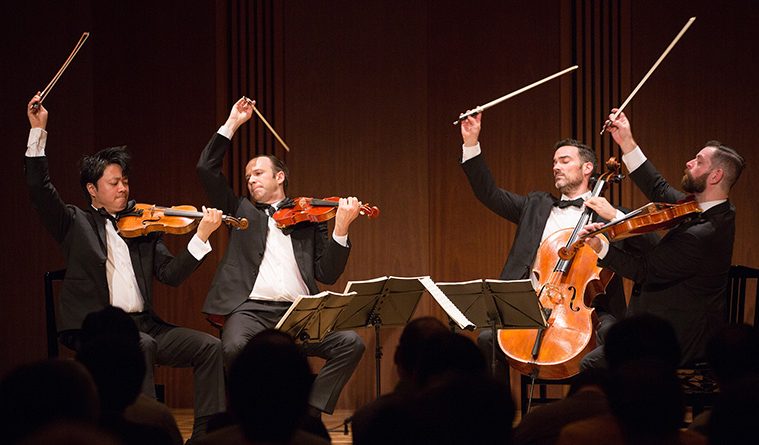 Home and Away: The Miró Quartet’s Fall Texas Season 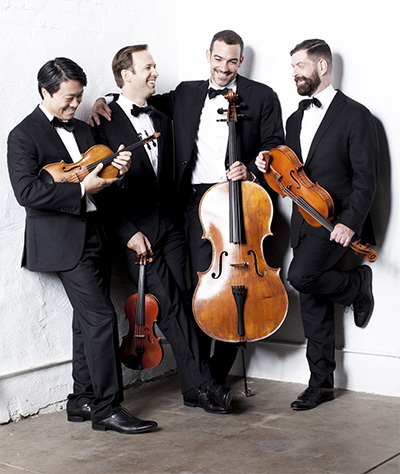 The Miró Quartet loves to expose an audience to the panorama of a single composer’s works. The hitch is that doing so can take a while: Performing all of Beethoven’s quartets, as the Austin group most recently did last year in Japan, requires a six-concert series. But Johannes Brahms’ three quartets fit neatly into a single program.

“You hear growth. You hear development in Brahms’ voice. You hear a lot of change,” cellist Joshua Gindele says. “We think it’s fascinating.” After showcasing the rich-textured works in its tour of summer festivals, the quartet brings them now to Texas: It performs them Sept. 15 at the University of Texas at Austin, the group’s home, then opens Chamber Music Houston’s season with them Sept. 20.

“It’s similar to listening to all of Beethoven’s quartets. … It gives you more insight into how a composer develops,” Gindele says. He offers a quick overview of the Brahms troika. The first two quartets—in A minor and C minor—have a kinship in their terseness and tension. But the A minor is contrapuntal and “exotic, like late Beethoven,” whereas the C minor unfolds more straightforwardly. The last quartet, in B-flat major, stands out not only because of its happier mood, but because it shows Brahms taking some chances, such as giving solos to the viola—an unconventional gambit at the time.

The Miró Quartet will dive even deeper into Brahms’ sonorous and dramatic works Nov. 9-11, when it hosts a mini-festival of his chamber music at the Butler School. The guests will include two members of the erstwhile Tokyo String Quartet; the bill of fare will range from Brahms’ rarely heard string sextets to one of his clarinet sonatas and a few of his songs. “Rarely do you get an opportunity to hear six or nine great works by one of the great composers of the Western canon in a short period of time,” Gindele says. “It’s been a lot of fun putting this together. It’s going to be great.”

No wonder he’s enthusiastic. The Brahms project harks back to one of the urges that spurred the group’s founding in 1995. “What we believed in and what we loved was the standard quartet literature—Beethoven and Haydn and Bartok and Shostakovich and Schubert,” Gindele says. “So we really focused our energy on learning the traditions of the classical style from European musicians, and (mastering) the technical precision that a lot of the American groups had. Our goal was to bring a new reading of these great works. We always stuck with the idea that if you’re passionate about something, then it will show.” 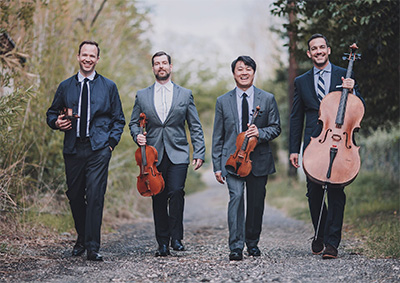 In its early years, the group coached with leading quartets, racked up competition victories, and earned the backing of musicians such as Isaac Stern, the globetrotting violin virtuoso who helped launch the careers of cellist Yo-Yo Ma and many others. As Gindele and his collaborators cultivated their style and repertoire, he says, they picked up ideas wherever they could find them. Their openness to suggestions paid off handsomely when they were grappling with one competition’s commissioned work.

“My girlfriend at the time was a really great violinist, and she was listening to us,” he recalls. “She said, ‘I don’t think you guys are approaching this the right way. I think you should play this like you’re in more of a folk-music situation.’ She had some knowledge about that. So we took that and built our whole performance around it.

“We went to the competition, and we won the prize for that piece. The composer said, ‘You’re the only group who got it —who got the right spirit.’ It was funny. I told him, ‘Thank you, but we can’t really take credit for it. It was my girlfriend.’ And he said, ‘You should take credit for the fact that you listened to your girlfriend!’”

From insights such as that to the inner workings of Beethoven and Brahms, Gindele and company share the fruits of their experience at UT’s Butler School of Music, where the group is quartet in residence. The four teach private lessons in their instruments, coach chamber groups and “carry the UT flag as we play around the world,” Gindele says. They’ve led their double lives as touring artists and teachers since arriving at UT in 2003.

“For classical musicians, with the exception of a handful, touring is a sparse life,” Gindele says. “We’re not going to make exceptional livings just traveling and playing concerts. Plus, it’s extremely rigorous. We wanted to have a home. We wanted to feel like we were part of a community and making a difference. We had incredible teachers growing up and in college, and they had a huge impact on us. It’s our responsibility to pass on their knowledge.”