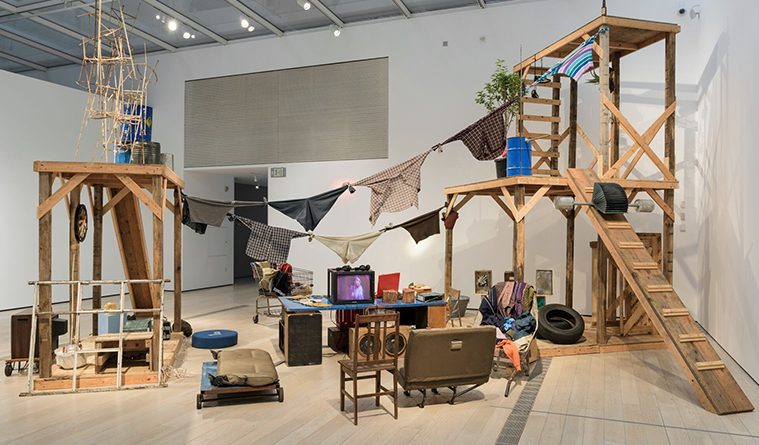 HOME—So Different, So Appealing at MFAH 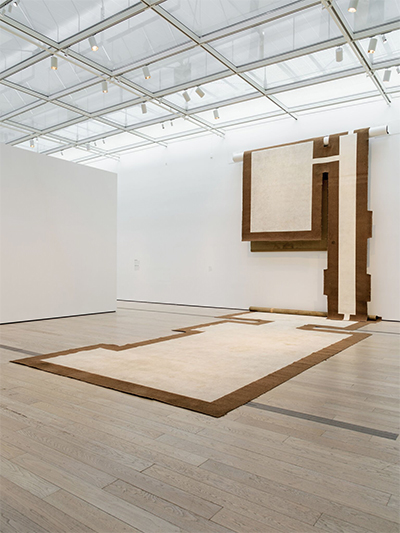 The breakthrough exhibition HOME—So Different, So Appealing, a seven-decade survey of works by Latin American and U.S. Latino artists who address the universal, elastic theme of home, draws part of its landmark status from its organizers, both encyclopedic museums, and the vast real estate they’ve given the show. As sprawling as its host cities, HOME is a joint project of the Los Angeles County Museum of Art, where it was the first of the regionwide Pacific Standard Time: Los Angeles/Latin America exhibitions, and the Museum of Fine Arts, Houston, where it dramatically fills the Ludwig Mies van der Rohe-designed Upper Brown Pavilion through Jan. 21.

Exhibition curators Mari Carmen Ramírez of the MFAH; Chon Noriega, director of UCLA’s Chicano Studies Research Center; and Pilar Tompkins Rivas, director of the Vincent Price Art Museum at East Los Angeles College, opted for a thematic approach over a chronological narrative to enable dialogues between works across decades and borders—and to some extent, different juxtapositions of artworks in each museum. The one potential drawback to bypassing chronology is that, while HOME makes clear to viewers with some prior knowledge of Antonio Berni’s monumental assemblages, derived from what he called “the pathetic decoration” of poor streets, and of Gordon Matta-Clark’s “anarchitecture,” just how foundational these pioneering figures are, it’s easy for visitors unfamiliar with the material to see them as simply two among dozens of artists—especially since they’re represented by one work each—a grainy Super-8-to-video transfer displayed on a small monitor, in Matta-Clark’s case. More generously represented are U.S. artist Raphael Montañez Ortiz’s radical “destruction art,” exemplified by his early 1960s Archeological Finds series of assemblages made from destroyed household furniture and his highly innovative, similarly distressed film and video works; and the late Argentine artist León Ferrari’s dazzling but chilling early 1980s heliograph series The Architecture of Madness, which fills a room with architectural drawings that teem with symbolic, at times anthropomorphic evocations of a surveillance state. Although Ferrari was responding both to his opposition to the Argentine military government and to his exile in the Brazilian megapolis of São Paolo, these works, which he described as a “group of labyrinths without logic and no center,” seem prescient in our era of mass surveillance, identity theft, and changing privacy norms. 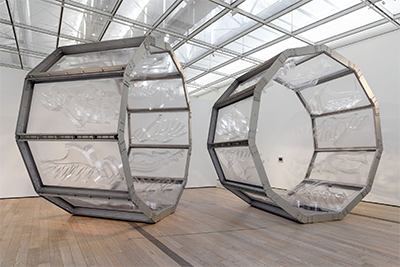 Each of these figures, in one way or another, seems to cast a long shadow over much of the later work in the show, and the non-chronological approach yields payoffs like being able to pair Berni’s 1963 masterpiece Juanito Goes to the City with the Argentine collective Mondongo’s stunning assemblage Buenos Aires Polyptych, which, while riffing on the format and scale of Jan and Hubert van Eyck’s 15th-century Ghent Altarpiece, is pure Berni in its shantytown subject and over-the-top yet readable imagery comprised of a dizzying accumulation of humble materials. Joining the conversation—and merging Berni’s “pathetic decoration” with a variation on Matta-Clark’s anarchitecure—is Abraham Cruzvillegas’s Autoconstruccíon, a sprawling installation reflecting what he describes as the ever-changing “self-constructing” character of the ingeniously makeshift homes in the Mexico City shantytown where he grew up. Elsewhere, Allora & Calzadilla’s 2005 video Under Discussion shows an act of aquatic autoconstrucíon as a man circumnavigates Vieques, a restricted Puerto Rican island municipality, in a flipped-over dining table powered by a motor.

Taking “pathetic decoration” into the dazzling heights of the “ultra baroque”—a term coined in a 2002 traveling survey of “post-Latin American art”—is the right half of Puerto Rican-born, Philadelphia-based artist Pepón Osorio’s gut-wrenching 1995 installation Badge of Honor, which replicates the glittering horror vacui of a teenage boy’s bedroom—every inch covered with posters, trophies, and memorabilia. By contrast, the stark left half replicates the father’s prison cell; the two communicate via video projection. Much as Ferrari’s Architecture of Madness series seems eerily prescient, Osorio’s installation seems to anticipate the role of Skype and other video-chat platforms in our lives, even as puts two human faces on the strain of mass incarceration on countless families.

Splitting, the 1974 film documenting Matta-Clark’s chainsaw intervention into a demolition-slated working-class home, is located a few galleries into the show, but you’ll notice his influence long before and after you reach it, starting with Colombian artist Leyla Cárdenas’s Excision, a four-inch “excision” of a room from a now-demolished 19th-century Bogotà home. Next to Splitting is a monumental “textile hanging” of sorts, but as the title—720 Sq. Ft.: Household Mutations hints, it’s in fact the carpet from Mexican-born, Los Angeles-based artist Carmen Argote’s childhood home. A later gallery features a darkly cheery homage to Splitting—Los Angeles artist Daniel Joseph Martinez’s The House America Built (2004-17), comprised of blueprints and a similarly split, life-size replica of the Unabomber’s cabin painted with Martha Stewart Signature colors. 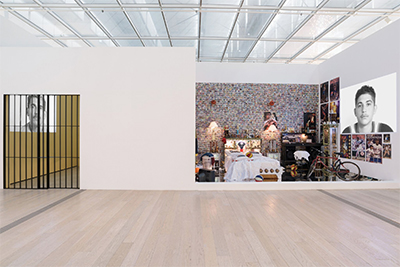 HOME isn’t meant to be a comprehensive survey of Latin American and U.S. Latino art since the 1950s; the work here is socially or politically charged. But while there are certainly plenty of poignant works on view—Texas artist Vincent Valdez’s suite of paintings eulogizing a friend who committed suicide after serving in the Iraq War; a Félix González-Torres curtain of light bulbs pointedly titled Untitled (North)—the works on view run the emotional gamut between heartbreak and hilarity. Different and appealing indeed, HOME is an exciting, at times pulse-pounding show with a sweep and grandeur worthy of its setting, which has also showcased ancient Egyptian artifacts; Japanese Buddhist sculptures, paintings, and folding screens; and last year’s breathtaking Edgar Degas survey. HOME marks a further milestone in the MFAH’s and LACMA’s development both as powerhouses in Latin American/Latino art and as encyclopedic institutions.