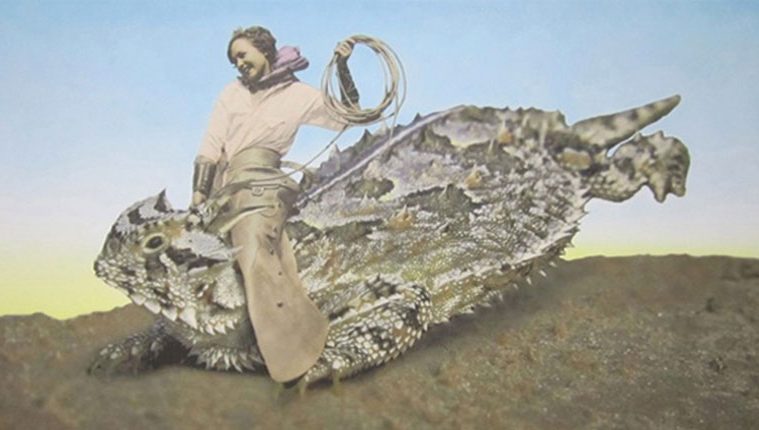 John Pomara has a solo show at the Barry Whistler Gallery titled off_Key2 comprised of new paintings and photographs incorporating miraculously manipulated images derived exclusively from the computer. Pixel forms floating in isolated color fields somehow eliminate the presence of the artist and defy understanding the technique that produces the ultra-smooth glistening surfaces. Not only is the procedure different to produce his art, but so is the medium and painting surface — pulling industrial enamel paints to completely cover an aluminum plate.

The materialized grids, networks, matrices, and structures successfully resemble a form of urban planning; visual components, comprised of small units organized into larger systems bring to mind sky views of parking lots, streets, lights, parked vehicles, and tall buildings. The point of these deceptively uncomplicated works, in Pomara’s own words in the composition “Digital-dating”: “With the globalization of urbanism creating larger sprawling metropolises, the idea of place takes on a visual motif of design and state of flux.”

To simulate the process, initial low-resolution images derived from social media networks come from Tumblr blogs, and then re-worked and repeatedly printed over with electronic glitches. Images then go back through the printer three to five times — additively disrupting the initial picture  —  altering it into a changing and digitized form of abstraction. Every multiple step of rerouting of the image negates and re-creates on top of the previous form, to produce a fresh, even more abstracted reconfiguration.

As in the image “Nude Tumblr Glitch” there’s interplay between painting and photographic practices. The mediation of “nude” images, the personal engagement of the hand-made (and its subsequent negation through mechanical disruption), and the use of industrial materials — culminate in an original and inventive form of art.

Pomara received his BFA and MFA from East Texas State University and he is a long-standing Associate Professor of Art at the University of Texas at Dallas. His mysteriously created, pictorial distortions, privately and publically owned decorative works of art deserve recognition. The show ends November 24.

Man-about-town and local art collector Dan Pritchett has curated The Geometric Showcase: Contemporary Galleries at the MADI. This group exhibit of works mainly by Houston and Dallas artists, reflect the geometric genre of the MADI or more specifically The Museum of MADI and Geometric Art (MADI stands for MAterialismo DIalectismo or Dialectical Materialism). A hard-edge abstract art style founded in Buenos Aires in 1946 spreads throughout this specialized museum on Carlisle in Dallas founded in the 1990s by Bill and Dorothy Masterson. They renovated this now modernistic building as the perfect backdrop for a new exhibition or to display the expanding permanent collection. The ground floor is divided into three spacious spaces devoted exclusively to the MADI; the other floors house Bill’s law practice.

The MADI Museum has been in the vanguard of modern geometric art for as long as I have been aware. As the only MADI and geometric museum in this country, it is a rare privilege for it to show artists of this caliber, alongside its permanent collections of historically and artistic important works, dating to the infancy of the movement. The show ends January 6, 2013.

Over at the Holly Johnson Gallery, Tommy Fitzpatrick has fine new works now showing. The canvasses of Fitzpatrick’s are distinguishable by their eye-stopping architectural forms of logic and design reflective of cityscapes. Skyscraper’s windows mirror the world, the structure of the steel grid sets up constant visual rhythm while the transparency of the glass, along with its reflections and shadows, create a complex optical tension. For the intense contrasting colors and structured kinetic patterns Fitzpatrick says he tries to depict the skin of architecture as flat as possible with the use of acrylic paint and tape. Using the modernist hard edge language, he simulates illusionistic space, more perfect than reality. His paintings are distorted, a type of crisis of perception.

A 2008 trip to Tokyo inspired these striking paintings as did “Electric Labyrinth” the title of a 1968 print by Arata Isozaki, a resident of Japan and the illustrious architect of the Museum of Contemporary Art in LA. “I wanted to continue my investigation into the language of architecture,” Fitzpatrick told me. “I want my paintings to be broader in scope and more ambiguous. In the past, I would have painted a specific building in a somewhat local palette.  In these new works, color is abstract and does not relate to this world.” The white, orange and blue palette, creates a three-dimensional effect favored for its visual distortion.

Fitzpatrick’s MFA is from Yale University and his BA from UTA Austin. The Modern in Fort Worth and the Houston Museum of Fine Arts own his work and he serves as a professor at Texas State University in San Marcos. The show ends November 24.

Not all the hot shows are in Dallas. William Campbell Contemporary Art in Fort Worth is rounding-up a fun show with new works by Bob “Daddy-O” Wade, who continues his attraction to Wild West images in the fittingly titled “Cowgirls and Critters.” The Fort Worth Star Telegram calls him, “A pioneer of Texas funk and connoisseur of Southwestern kitsch.” A born and bred Texas-size art maker, his affectionate appellate “Daddy-O” designates this deservedly internationally reputed artist for breakthroughs in photography and public art.

His appeal goes far beyond those with a proclivity to cowboy movies and his second cousin Roy Rogers. In this show “Playing Poker with Hope” is a rendition of the photograph of a dog or “critter,” a rescued victim of abuse; Hope inspired the founding of the Saving Hope Foundation. Ten percent of sales of dog-related work benefit this foundation. The front window of the gallery will contain a reincarnation of a 1977 edition of his trademark “cowgirls” — mannequins in clothing provided by the National Cowgirl Hall of Fame and Museum with “critters” on leashes.

One of Wade’s blown-up outdoor sculptures is the oversized 40-foot tall pair of cowboy boots at a San Antonio mall originally installed near the White House; for North Texans, it’s the infamous 40-foot long, 12-foot high, 2,600 pound polyurethane and steel mesh “Giant Iguana” (1974) or Iggy. It was once on the rooftop of the Lone Star Cafe in lower Manhattan; since 2010 it is atop a building at the Fort Worth Zoo.