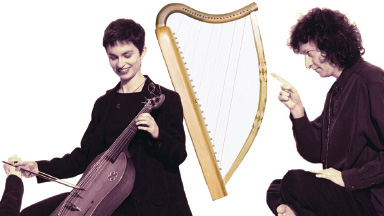 Houston is known for its Theater and Museum districts, help for its ballet, shop opera, symphony and beloved Tony Award-winning Alley Theatre.  But it’s also home to a thriving early music scene. And for a city that is more in tune with rodeos than recorders, that’s saying a lot.

Greg Barnett, an associate professor of musicology at The Shepherd School of Music at Rice University says the early music scene has been gaining in popularity nationally, but even he is a little surprised at the growth in Houston over the past several years.

“It is a little mysterious to me,” Barnett says. “I think part of it is curiosity, the romanticism and exoticism of period instruments. In the past a violin was played differently, the strings were catgut and the bows were different. It’s familiar but it’s not. The sound is different, it’s the sound that the composers of the time were creating.”

Early music, often called historically informed performance, focuses on concert compositions from medieval times through the Renaissance and Baroque periods and is played on authentic and reproductions of period instruments. It all began rather informally in Houston.

“We started out as the Houston Harpsichord Society in the mid 60s,” says Artistic Director Nancy Ellis of the now named Houston Early Music. “They just got together and played in each others’ homes. Than they started bringing in famous musicians and it just kept growing.”

Today Houston Early Music presents six concerts per season at area churches, usually with 100 to 150 in attendance. Ellis says her attraction to the music is based on the freedom of expression.

“There aren’t so many rules, so it’s more open to individual interpretation.”

“I’ve always liked it, there’s a directness about it,” adds Albert LeDoux, artistic director of the Bach Society Houston, which celebrates its 30th season this year. “You paint with a smaller pallete but it’s more beautiful that way.”

Founded in 1982 to present historically informed performances of Johann Sebastian Bach at vespers at Christ the King Lutheran Church, the organization today presents multiple performances — most of which are free — maintains its own Bach Choir and in 1995 installed the so-called Bach Organ built by Fritz Noack in the style of 18th century Saxon organ-builder Zacharias Hildebrandt.

And then there’s Mercury Baroque, the orchestra for the Bach Society and a performing group that hit the scene 11 years ago. With a subscriber base of 650, this organization performs some 50 times a year in and around Houston, records a CD a year and has a business plan that calls for more growth and touring.

“In the last 10 years there’s been a real growth in the Houston scene,” says Artistic Director and conductor Antoine Plante. “I think in the national early music community people know there’s a lot going on here. “Music is important in people’s lives,” he adds. “Baroque music makes a strong statement, a grand gesture, to move someone to passion. And it’s more intimate than a symphony concert because we play in smaller halls and have more interaction with our audience.”

LeDoux agrees that intimacy maybe one of the draws. “Early music doesn’t work in a large venue,” he says. “These instruments make a smaller sound, you need to be close to them.”

“Plus it doesn’t require a long attention span,” adds Matthew Dirst, the artistic director of Ars Lyrica and an associate professor of music at the Moores School of Music at the University of Houston. “Compare a Mahler symphony at two hours to a concerto at 25 minutes.” And for modern audiences more used to half-hour sitcoms as entertainment, that can be a real appeal.

“When I came here 13 years ago I saw the potential,” Dirst says. “It took a nucleus of people here to get behind it but once it got going it was easy to see it grow.”

Ars Lyrica is now in its seventh season, performing five concerts a season and recording. Last year the organization was nominated for a Grammy for best opera, up against such renowned companies as the Royal Opera House in London. Houston early music audiences tend to be younger and more diverse than others but you’ll also find older symphony goers looking for a new experience as well as trained musicians and home recorder players. And despite the current climate for arts funding, all of Houston’s organizations seem to be keeping their heads above water financially while planning for expansion.

“I think an early music festival would be great for the city,” says Plante. “Some of my colleagues and I have been talking about it.” Harpsichords instead of heifers in Houston? Looks like there will be plenty of audiences for both.