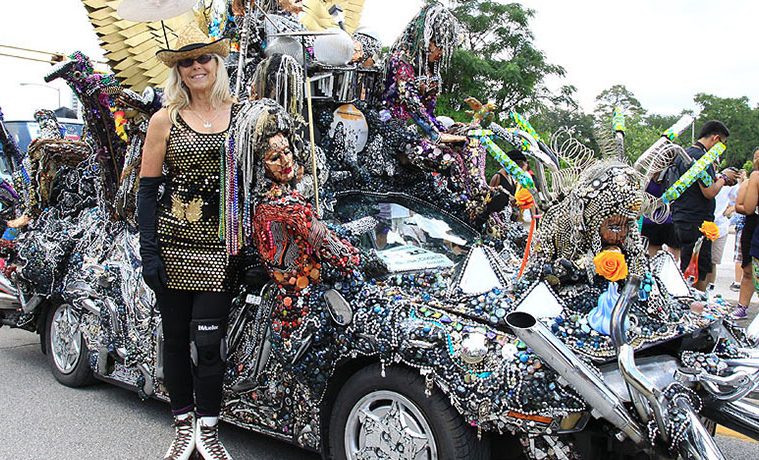 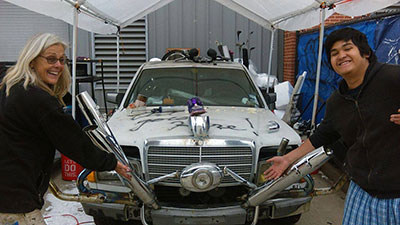 Rebecca Bass and a Reagan High School student work on their entry for the 2015 Houston Art Car Parade. Photo by Rebecca Bass.

Art Car maven Rebecca Bass sums up her days like this: “I run around all day collecting things. It might be getting chrome and stuff from Mancuso Harley Davidson or looking through things at Reuse Warehouse Houston, where you never know what you’re going to get.”

Whatever it is, Bass will put it to good use. Since 1990, the art teacher has worked with groups of students to create an art car for the Houston Art Car Parade. Sponsored by The Orange Show Center for Visionary Art, the annual event draws hundreds of thousands of spectators along Downtown Houston’s Allen Parkway, who turn out to see the way artists have tricked out cars into rolling sculptures. One of the largest events of its kind in the country, it’s also the Orange Show’s largest arts education outreach program. Last year, the Orange Show awarded nearly $17,000 in prizes.

Bass and her group have often been recipients of prize money. She taught high school art for 29 years, then retired, and was this year hired by John H. Reagan High School in Houston’s Heights Neighborhood  to work with students to build an art car. 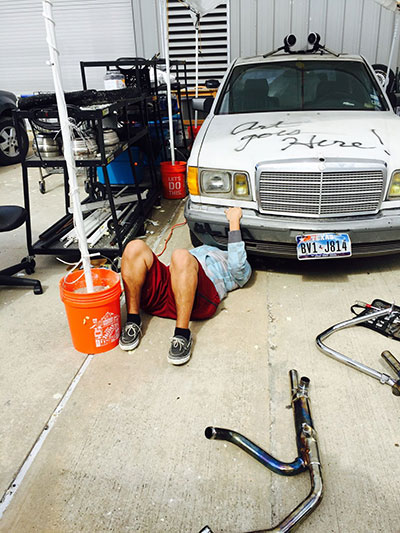 A Reagan High School student works on their entry for the 2015 Houston Art Car Parade. Photo by Rebecca Bass.

“It’s a three or four month process,” she says. “And this year, they changed they date, so we’re working like mad.”

The parade and its companion events will be held the weekend of April 9-12. The weekend kicks off with the Main Street Drag, where art car artists and drivers take their creations for a spin through Houston’s streets, much to the delight of surprised spectators who catch a glimpse at the mobile masterpieces. The cars line up later that afternoon around the perimeter of Discovery Green Park, where anyone can come out and see the creations. The legendary Art Car Ball takes place on April 10, and the parade rolls out on April 11, with an award ceremony on the 12th.

She and the 13 students who are part of the art car team have taken up space out by the school dumpster, where they’re constructing a project that’s an homage to Jimi Hendrix’s Electric Ladyland album. One of the students working on the car is a guitarist and he’ll be onboard, playing “Purple Haze.”

“So this isn’t just about them learning about art,” Bass said. “They’re learning about it all. About the 1960s, researching what people wore, the music of that time. It’s really a holistic experience. There’s just so much to it.”

Bass says they’re out there five days a week – every day after school except Friday, and Saturday.

“They’ve been so wonderful and dedicated.” 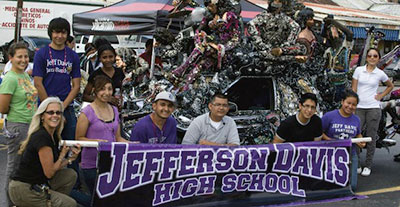 Bass says the months-long project is a microcosm of skills they need to learn in life.

“They’re working together as a unit, and figuring out how to work out their differences and disagreements, how to suck it up when an idea doesn’t work, how to accommodate other people’s thoughts and the way they work. These are things they’ll need in the work world, where they’ll work in groups.”

Bass considers herself more coach than participant, and she readily admits to being strict. She insists, for instance, that the students commit to finishing the project, not bailing on it if they become frustrated or things aren’t happening the way they planned.

At press time, Bass says the team was still creating the sculptures for the car, which will feature a fire element and embodiments of Hendrix’s “Little Wing,” “Foxy Lady” and “Dolly Dagger” melodies. Much of the car is welded, and Bass, who’s taught welding before, says the students have enjoyed the experience. She’s been helped by two artists, Johnny Rojas and Julian Luna, who have both donated their time. 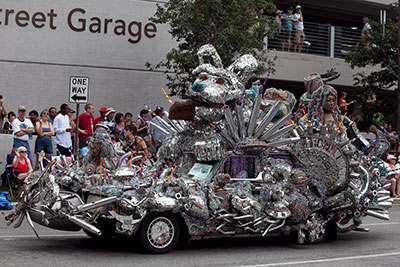 “It’s fantastic to watch the kids bond with each other, and get to be real friends,” she says. “This is  a very difficult, labor-intensive, fun process. And I have to pinch myself all the time that this is what I get to do with my life.”

Bass and her students’ cars now reside all over the world. One of the creations in is Kaula Lampur. Another is in Mexico City. There are also art cars of theirs in Baltimore, Austin and Minneapolis.