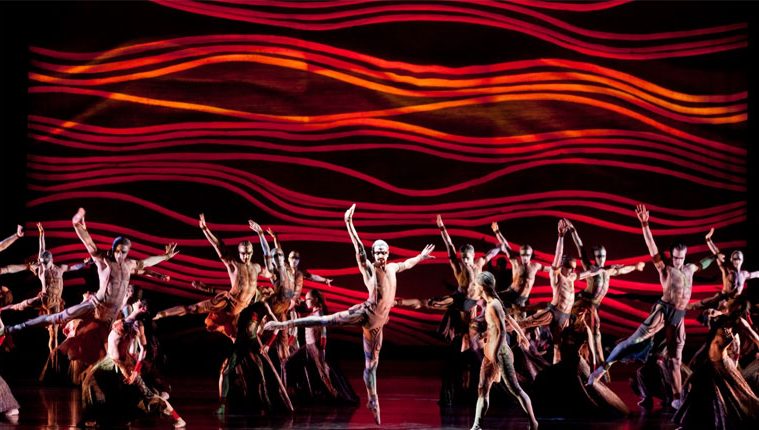 Houston Ballet: The Rite of Spring

Off the Floor: Houston Ballet soars again in a trio of works by Stanton Welch, Edwaard Liang and Mark Morris

As I rushed past a gaggle of squawking grackles on my way to the show, little did I know the real flock was inside as Houston Ballet took flight in Edwaard Liang’s soaring new ballet, Murmuration.

For those not in the bird flocking know, murmuration refers to the extraordinary patterns birds take in their migratory journeys. No one knows why, or really how, they accomplish such intricate choreography. When it comes to Liang, a rising presence on the world ballet scene and the newly appointed artistic director of BalletMet, it’s equally mysterious. The choreographer has such a talent for creating movement that travels through the air space that the ground becomes just a momentary resting place.

Set to Ezio Bosso’s Violin Concerto No. 1, Esoconcerto, Murmuration unfolds with an unstoppable momentum mirroring Bosso’s  dynamicscore.  Although the ensemble work shows off Liang’s finesse with group dynamics, delighting us with contours that ripple across the dancers in a layered cascade, it’s in the pas de deux that the ballet reaches its most riveting passages. Lauren Strongin surfs the air with a confidencethat is both trusting and fearless. She jumps backwards while her partner Rupert Edwards leaps forward to catch her. We gasp, she flies on. Liang cleverly doesn’t let our eyes settle on the ballet’s most arresting moments. Mireille Hassenboehler and Simon Ball’s duet is all tangle, push and pull, exuding a playful quality.  They seem caught in the web of each other’s magnetic pull. Just as they have crystallized their chemistry, the always elegant Sara Webb and rising dancer William Newton spin their magic in yet another gorgeous duet.  Liang layers the duets so that one begins before another finishes, just the way birds shift patterns before we can detect the change. So much of Liang’s brushwork evokes the natural world, be it a flock of starlings or an avalanche; we are caught in the spell of a storm of movement that has no beginning or end, but a seamless unraveling.

Liang demonstrates his more earthy leanings in a powerful men’s section, which reminds me of the way birds hover above the ground then fly away without ever landing. Standouts in the ensemble include newcomer Shahar Dori and Derek Dunn.

The pièce de résistance is the duet between Karina Gonzalez and Christopher Coomer.  Gonzalez will not be caged, as she springs off of Coomer with unbounded lightness. Speed, fluid dynamics, combined with a kind of liquid ebb and flow characterize their unity, which, in the end, anchors a ballet so astonishingly airborne that we want to see it again as soon as its over.  Even the relentless rain of feathers grew on me.

It’s the year of The Rite of Spring, and the world welcomed yet another ballet to Stravinsky’s famous score, celebrating its centennial this year.  There are so many, it’s indeed a rite of passage to create one. Stanton Welch’s tribal offering, complete with Rosella Namok’s striking paintings as a backdrop, proved a highly theatrical experience, jammed packed with the kind of powerful group action that characterizes much of Welch’s large scale ballets. Layers of dancing matched the intensity of Stravinsky’s iconic score, masterfully performed by the Houston Ballet Orchestra under the director of Ermanno Florio. Despite the ballet’s density, the performance made for one fabulous vehicle to show off rising star Nozomi Iijima, who I have recently named one of “25 to watch” in Dance Magazine. For good reason, so it seems; her speed, precision and pocket-sized power provided a strong counterpoint to the ensemble’s fierce presence. Costumes by Welch with Laura Lynch featured elaborate body paint, braided wigs, and spectacular headdresses. The ballet packs such a visual punch, I found myself more taken with the theatrics than the obligatory ritual sacrifice.

It’s always a joy to watch Houston Ballet tackle another work by Mark Morris, deepening their fluency in Morris’ breezy signature as they go. Pacific, although more balletic than the previous work by Morris in the repertory, allowed the dancers to practice the “less is more” aesthetic so inherent in his work, providing the more subtle tones of the evening. Melissa Hough and Linnar Looris were simply breathtaking to watch.

Houston Ballet’s The Rite of Spring continues on March 15-17.