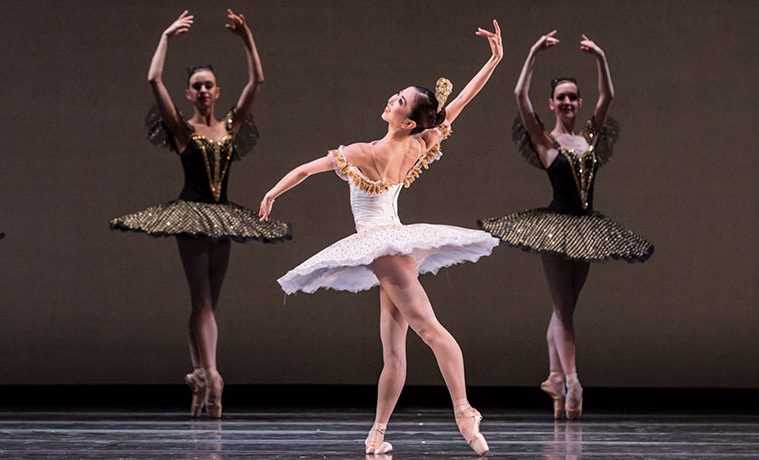 IMAGE ABOVE: Yuriko Kajiya and Artists of Houston Ballet in Paquita. Photo by Amitava Sarkar. 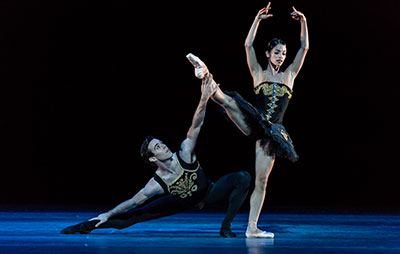 In traditional classical ballet, the corps de ballet is, more often than not, relegated to posing, serving as a backdrop for the principal dancers. As such, the program for Houston Ballet’s From Houston to the World at the Wortham Theater Center was a breath of fresh air. From Jorma Elo’s stark ONE/end/ONE, to Edwaard Liang’s flowing Murmuration, to Houston Ballet artistic director Stanton Welch’s version of the Third Act of Paquita, the ensemble work was striking — a true highlight of the Sept. 21 matinee.

In Elo’s ONE/end/ONE, the stage is a blank canvas. When the curtain first rises, the costuming suggests classicism — the women, after all, wear small black tutus complete with silver-and-gold embellishments — but as soon as the dancers begin jetting around the stage, the choreography contradicts this notion.  The women dance en pointe with bent supporting legs, the men perform body rolls, gestures are flung through the ensemble in cannon and heads are cocked sideways; in short, the classical vocabulary is tweaked for an utterly modern effect. In particular, Chun Wai Chan’s precise dancing was well suited to the syncopated rhythms Mozart’s Violin Concerto No. 4 in D, K 218, performed live by the Houston Ballet Orchestra. Meanwhile, Aaron Robison’s tall frame whirled through turns in a delightfully all-encompassing manner. 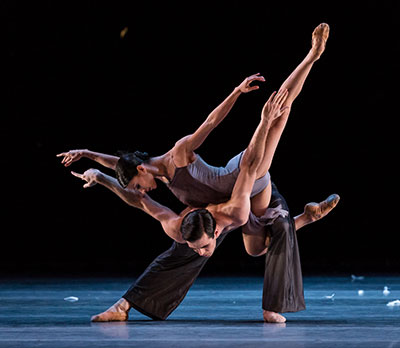 The lifts and balances carried out by Ian Casady with Sara Webb, as his partner, were also impressive. In one instance, Webb was laid out over Casady’s leg before he lifted the other, to come into a one-legged balance bearing the weight of two people. Casady demonstrated his strength and control in another lift with Webb on his back; Casady slid into a lunge without the assistance of his arms to keep Webb balanced.

If the choreography for ONE/end/ONE had a crisp quality, then Liang’s contemporary ballet Murmuration was the opposite. Echoes of the supple dancing, clearly inspired by Ezio Bosso’s humming Violin Concerto No. 1, Esoconcerto, flowed through the purple-grey chiffon costuming. White feathers fell from the ceiling, illuminated in soft lighting against a black backdrop, making a quiet impression. The 17-member ensemble windmilled its arms in canon and filled the stage with a soothing energy; then the men took the spotlight in charcoal-grey, wide-legged pants, their fluid zest seemingly limitless. The whole scene had a melancholic, autumnal feel; the live violins of the Houston Ballet Orchestra buzzed, a mesmerizing murmur on the cusp of an explosion, accented by brilliant choreography and dancing. 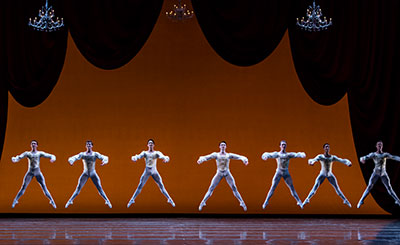 Artists of Houston Ballet in Paquita
Photo by Amitava Sarkar.

Though the technically demanding Paquita is a classical ballet (it had its premiere in 1846), the female corps de ballet plays a large role, and artistic director Welch took this even further in his staging of the Spanish-themed choreography by adding a men’s section of ensemble work, featuring leg beats, high jumps and multiple-turn pirouettes. There’s no hiding in Paquita — even as principal ballerina Karina Gonzalez stepped into the spotlight in a glittering, oversized tutu, the corps dancers balanced in arabesque on one leg, and echoed Gonzalez’s form in their own movements. Gonzalez’s partner, Charles-Louis Yoshiyama, accented the finishes to his jumps and turns with an appropriately virtuosic flair. Of the soloists, Soo Youn Cho stood out for her sure-footed performance and facial expressions of pure joy; her delight and confidence were contagious.

From Houston to the World demonstrated the range of Houston Ballet’s dancers, from classical to contemporary choreography, from quiet expression to dramatic interpretation. All of this from Houston to the world.