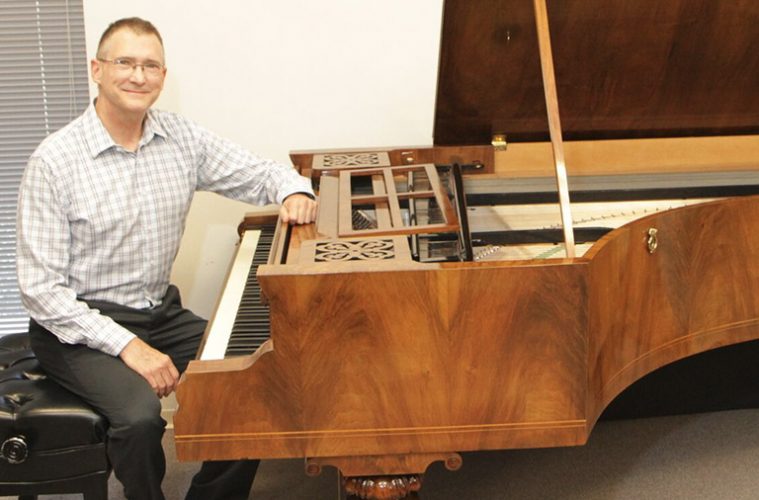 Context co-founder and artistic director Brian Connelly
at his 1852 Bösendorfer piano in his Shepherd School of Music
studio at Rice University. Photo by Mark Wozny.

In your typical music-school teaching studio, a Steinway grand piano would easily dominate the room. But Brian Connelly’s quarters in the Shepherd School of Music at Rice University show a different scene. The Steinway all but fades into the background as a visitor’s eye takes in four other pianos—a panoramic view of the instrument’s history.

A replica of a Viennese instrument from the 1790s might pass for a harpsichord until you peer in and see that it has hammers, not quills, to strike the strings. A piano from 1820s Vienna sports five pedals, one of which triggers a gadget that swats on the strings to mimic a cymbal crash. Sure enough, it makes a racket. 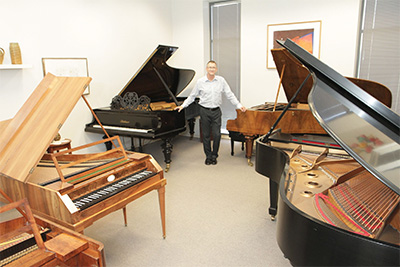 Context co-founder and artistic director Brian Connelly among his collection of historic pianos, at his Shepherd School of Music studio at Rice University. Photo by Mark Wozny.

Those two instruments have wood frames, but a Viennese piano from 1852 contains a couple of metal braces, letting it pull the strings tighter for a more powerful sound. A German instrument from 1890, even more massive than the modern Steinway, boasts an extra string for each of note in its treble range, tuned an octave higher for extra gleam.

An 1810 Viennese piano at Connelly’s home rounds out the collection. Most of the instruments will turn up in Shepherd’s Duncan Recital Hall this season as Connelly and his period-instrument group, Context, perform music ranging from Beethoven and Schubert to Debussy and John Cage.

“We’re a period-instrument ensemble, but we play music of all periods,” Connelly says. That’s where the keyboard menagerie comes in. Just as Context’s string players switch to old-time gut strings, rather than modern steel ones, for 18th- and 19th-century fare, Connelly picks the keyboard that suits the music at hand.

“It’s like finding the right costume for the role,” he says. Connelly zips from one keyboard to another as he demonstrates’ the various instruments’ attractions, which generally begin with a transparency and clarity that contrast with the Steinway’s heft. As he shows off the singing quality of the 1852 piano—made by Vienna’s Bösendorfer, a firm that still exists—Connelly interrupts himself.

“I don’t want to give you the impression that we (in Context) do this out of antiquarian interests,” he says. “I’m not an antiquarian, and I don’t try to imagine myself a scholar of ancient music.” Instead, by hewing close to the sounds the composers themselves heard, “you’re a vehicle for the character of the music—trying to create that character as vividly and freshly as possible. To have the right instrument just makes sense.” 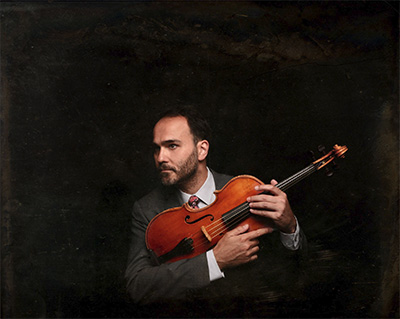 Max Mandel performs as part of Context’s Romances & Fairytales on Oct. 21, 4pm at Duncan Recital Hall in the Alice Pratt Brown Hall at the Shepherd School of Music at Rice University. Photo courtesy of the artist.

The opening of Beethoven’s “Moonlight” Sonata, which he’ll play in Context’s Sept. 23 concert, illustrates his point. When Connelly plays it on the Steinway, it sounds quiet and rich—nothing improper about that. But the 1790s instrument, with its gentler, more veiled tone, lends the music another layer of mystery.

Connelly first encountered historic pianos as a student at the University of Michigan, he says, and they didn’t interest him. At the time, nobody really knew how to restore and adjust them so their qualities could shine. Connelly’s attitude didn’t start evolving until he joined the Rice University faculty and became a colleague of violinist Sergiu Luca, a period-instrument devotee. When the two traveled for concerts, Connelly recalls, they checked out the instruments in the towns they visited. They began to find pianos whose restorers had uncovered the hidden appeal.

Connelly and Luca founded Context to reunite the long-lost sounds with music that was conceived for them. Since Luca’s death in 2010, Connelly has led the group on his own.

The instruments don’t grab listeners with a modern Steinway’s sheer impact. So people who hear them for the first time, Connelly says, need a little time for their ears to adjust. “I can’t tell you how many times people come up afterward and say, ‘What did you do to the piano during intermission? It sounded so much better in the second half,’” he says. The answer is that nobody touched the piano; rather, the listener’s ears adjusted. “That teaches me that people just need to take time with it, and be helped a little bit.” 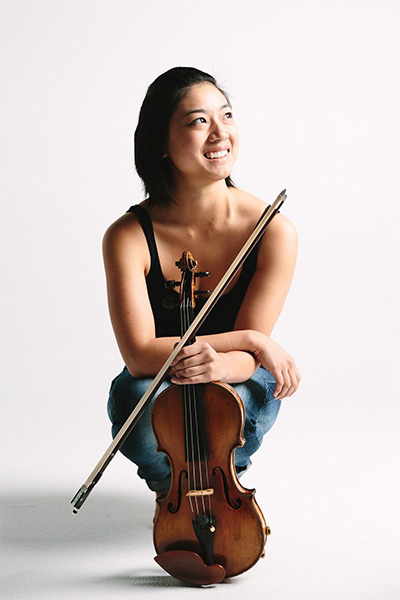 Natalie Lin performs as part of Music in Context’s Romances & Fairytales on Oct. 21, 4pm at Duncan Recital Hall in the Alice Pratt Brown Hall at the Shepherd School of Music at Rice University. Photo by Simon Darby.

Robert and Clara Schumann were alive when Connelly’s Bösendorfer was built, and he’ll move it to Duncan hall for an Oct. 21 concert featuring the couple’s music. The program will include Clara’s Three Romances—her best pieces, Connelly says, “harmonically very luscious” —and Robert’s beloved Piano Quintet. Since Claude Debussy owned a piano made by Blüthner, Context will bring out Shepherd’s Blüthner—that 1890 behemoth—for a March 24 concert including the young Debussy’s Trio.

The 1826 Conrad Graf piano, built while Schubert was alive, will emerge for two concerts spotlighting the Viennese master of melody, on Jan. 20 and Feb. 17. The latter program will include the “Trout” Quintet—and two days later, devoted Schubertians can return to Shepherd to hear the tune-filled work played on modern instruments by Trio con Brio Copenhagen and guests, courtesy of Chamber Music Houston.