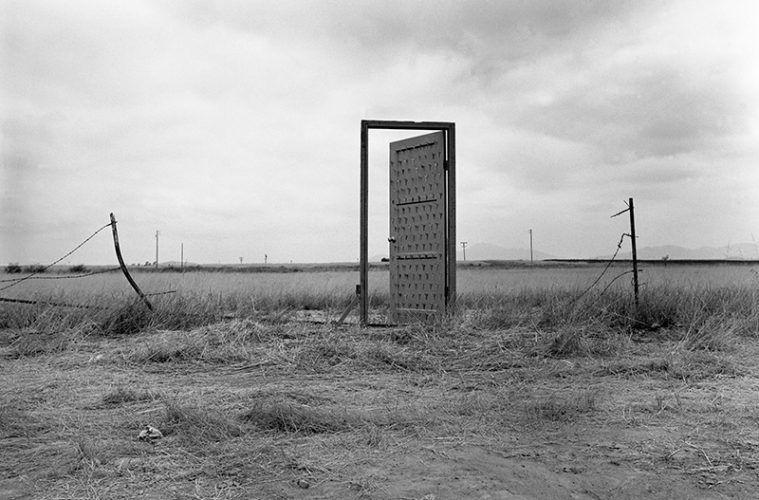 Richard Lou, Border Door, May 28, 1988. Site-specific installation/intervention performance.  Gold painted wooden door, nails, keys, door knob, hinges, and blue wooden frame.  Free standing workable door installed on the Mexico/U.S.A. border ¼ mile east of the Rodriguez International Airport. The performance extended to the neighborhood where the artist grew up in Tijuana, where he gave out over 250 keys inviting the residents of La Colonia Roma and Altamira to use his Border Door. Photo by James Elliott, courtesy of the artist.

With exhibitions and performances at more than 20 venues across the city, Houston’s spring of Latino art is in full-swing. Developed around the Latino Art Now! (LAN!) Conference at the University of Houston (April 4-6), the event has become a city-wide cultural season, the only Latino-led event of its scale in Houston’s history, boasting an impressive roster of exhibitions and events across the city.

The conference was founded in 2005, and is now in its sixth iteration. Initially intended to draw critical attention to Latinx artists working outside the mainstream Latin American art world, it has also become a way to grow the field of study of Latinx art, and push for institutional support of exhibitions and artist-led programs across diverse cities. Previous LAN! conferences have been held in New York, Los Angeles, Washington, D.C., and Chicago. 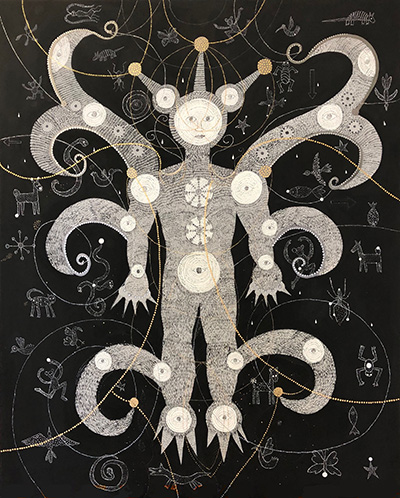 Memphis-based artist Richard Lou has attended every previous conference. “The conference is a way of reaffirming ourselves as practicing culture-makers and it’s a way to come together and convivir, to share life with each other, to be with each other,” he says.

Houston-based artist and organizer Moe Penders cites a recent study showing that Houston’s Latinx communities make up 45 percent of the city’s population, but have historically garnered less than one percent of the city’s arts funding. In many cities, “the Latinx artists in the city don’t get shows at [institutional spaces]… We have tons of talent, but usually it’s up to us, making our own spaces, creating our own shows in our studios, or whichever spaces we do have available.” Many of Pender’s shows have been held at the artist-run studio space El Rincón Social, for example.

Artist Delilah Montoya notes that this cultural moment in Houston is catapulting new conversations, new opportunities, and a renewed sense of community. “One of the things I felt really committed about was to activate Houston,” she says. “We all got together, asking what can we do to make the City of Houston more active. We really don’t have a strong venue for [Latinx] visual artists. We started talking to nonprofits, and we were able to get them on board. HCP, Lawndale, Art League, and so many others – they really came up to the mark… LAN was a catalyst for that.”

At one of the organizers’ first meetings, they put together a spreadsheet of artists’ names and contact information – the first time any organized directory of Latinx artists existed in the city. That spreadsheet grew so quickly, they realized there was a need for a more permanent site connecting artists. “Manteca stands for Latinx Artist Registry Directory, which is LARD, and from lard we got Manteca,” Penders says. Supported by grant funding, Manteca is a free online directory that is serving as the springboard for seven curated exhibitions this spring. 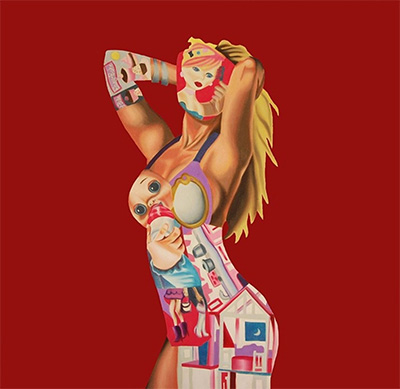 Suzy Gonzalez, All She Wants for Christmas, 2011. Oil on canvas, 30 x 30 in. On view with the Gilbert Cardenas collection at University of Houston. Image courtesy of the artist.

The impetus for organizing has been difficult to sustain in the past, Montoya notes. She thinks some of that difficulty lay in the absence of sustained educational focus on Latinx history and culture. “At University of Houston, for example, Latinx and Chicanx art history was never really taught in a systematic way,” she says. “Latinx students were not taught to understand their own history, were not taught how to communicate it.” This absence of historical context left many artists feeling adrift. With the arrival of LAN, she says, there is renewed energy for organizing, studying, and connecting.

Plurality across Latinx communities is something Montoya, Lou, and Penders all note as a central concern. “It’s Latin arts, not Chicano or Mexican arts, which a lot of people confuse…” Penders says. “Throughout history, Central American artists have not been included in that, or South American either. Although our cultures may be similar, they’re not all the same, obviously. We’re not all from the same country, we don’t all have the same culture… I think it’s very important that everybody gets included, Afro-Latinx people, queer Latinx people, people within the LGBTQI community, trans people, everyone….”

That plurality extends across generations, Penders adds. “People have been here for generations, close to the border (which wasn’t a border, it was a part of their land), and it’s just ironic that people who have been here forever have had to assimilate and hide their culture, hide who they were because of how their parents were treated, how they wouldn’t be taught to speak their language to fit in.”

“The major change and the most important change (in the field of Latinx scholarship) is for it to be a much more pan-Latinx experience, that is much more inclusive,” Lou says. “Hopefully the machismo has been fading away and the ethno-centric focus has faded away.” 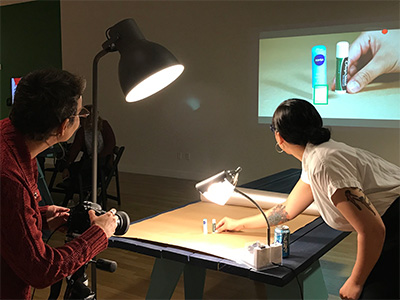 Collective Presence, Laura Napier’s Sea of Oil Story Share Show and Tell, Courtney Khim sharing chapstick after sharing a story on how it relates to the social culture of oil and gas. Image Courtesy of Ashley DeHoyos and DiverseWorks.

At DiverseWorks, curator Ashley DeHoyos has developed a series of micro-residencies this season. Called Collective Presence, the residents (from Houston and from other cities) are thinking about collective action and decolonization, how to create space for shared conversations and political pivot points. “What could we do if we all came together?” De Hoyos asks.

“One of the things I’m really interested in seeing the Spring of Latino Art and LAN bring to Houston is more visibility to Latinx art and culture, and more understanding of the complexity that is found within it,” she says. “A lot of artists are struggling to figure out where their practices fit in, what does it mean to identify within this diaspora, what does that diaspora look like? Just like any other diaspora, Latinidad is very complex and very open.”

DeHoyos notes the need for more spaces owned and operated by and for people of color. Citing El Museo del Barrio in New York and Mexic-Arte in Austin, she points to the historic creation of such spaces in other cities. “Not only [do we need] a space that is a museum or large institution, but there is a need for more DIY spaces owned and operated by people of color, so they have a say in their narratives, and how their work is shown,” says DeHoyos. “And that will also play into how [we understand] what Latinx art can be, what will be part of the canon, who can be in an exhibition space, who can own and operate a gallery, what do exhibitions look like, what do they say, how do they say it.”

One place artists have found safe haven is through making zines, says San Antonio-based artist, zinester, organizer, activist, and educator Suzy Gonzalez. She notes that zines allow artists “to break out of all these dichotomies,” she says. “You don’t need to be validated by an institution.” Gonzalez will be participating in a panel at LAN about Latinx zine-making as a radical practice, one that includes cultural self-care. Zines “can be very personal, can be a coping mechanism… [can be a way of] creating that space for yourself. In some ways, it’s like pulling artists out of the closet, saying there are other ways of working besides Western methodologies. You don’t need permission: you only need you.” 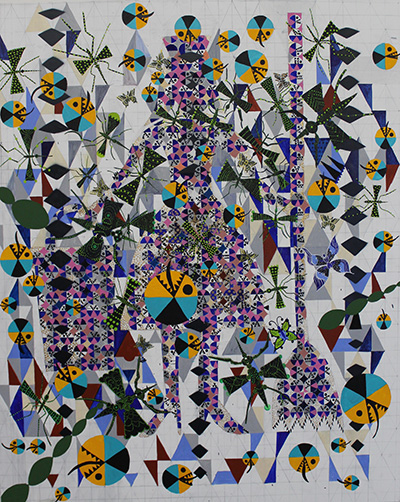 Gonzalez acknowledges the complexities of identity-based categories. Even how she describes herself has changed as language has evolved. “I’ve started spelling Chicana with an x, as a way also of connecting to indigenous roots. For everyone it’s different, and it’s important that we’re able to speak individually, for ourselves… There is this growth that’s happening with a new generation, [and] I love that language is ever changing.”

Apart from opening the doors and conversations among Latinx artists, the spring also invites a consideration of allyship and support from non-Latinx communities and viewers. As Lou notes, making spaces for this history and these practitioners also grows a broader cultural awareness of American history in all its depth. “Working with allies and coalition building, all those old ideas still hold true,” he says. “There’s no other way around it. Even if we base our actions on our own self-interests, we have to work with allies, we have to embrace them… It’s the human thing to do to model what an extended family looks like, what an extended community looks like, what an extended neighborhood looks like, for us to share the same techo, the same roof, and to work together under that same roof.”

Artist Gerardo Rosales opens a solo exhibition at Transart in March, his first in Houston since he moved from Venezuela to Houston in 2000. “I’ve never seen this kind of interest in the city in supporting the art made by the Latino community that lives in Houston,” he says. “The artistic production of this community is so relevant.” With the Spring of Latino Art, Rosales says, he has received grant funding and private support to create an exhibition based on years of research. “This work centers around my experience as an immigrant, and the experience of many immigrants that come from Latin America, looking for the chance for a better life,” says Rosales. “When they arrive, they find that this city also mirrors the life full of difficulties from which they were fleeing. This is a very special opportunity to be able to share my story, to share the story of these immigrants who live invisibly in the city.”

“[We are moving] away from old paradigms in regards to how we would see ourselves,” Lou adds. “It’s important for us to be able to establish scholarly roots and to tend to them, because if we don’t no one else will: we know that historically. These are things of vital importance, to ensure that there’s a very articulate legacy of who we are as culturally producing community. We have a history, distinct histories, and we have been participating in the reshaping and redefinition of the United States.” Latino Arts Now is not only about the creative process, he concludes, “It’s really about affirming who we are.”