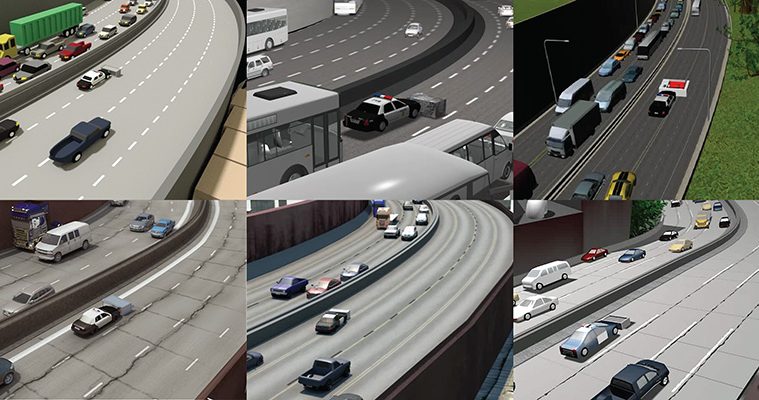 I Think We Meet Here, on view through Feb. 23 at UT Austin Visual Arts Center, is an exhibition of video-based work by Shana Hoehn, Yue Nakayama, and Felipe Steinberg, three artists from the Core Residency Program at the Glassell School of Art, Museum of Fine Arts Houston, each of whom has concept-driven practices and an interest in artworks based on collaboration. Video art usually demands great engagement from the audience, and the Core program is renowned for its intellectual rigor, so I came prepared to think.

For The Pitch, Steinberg distributed an online call for animators, with a defined set of assignments. Artists were asked to make an animated pitch for the job; create a digital version of the first photographic image known showing a window opening onto a landscape; and create a digital image of a newsflash where an ambulance pushed an air-conditioning unit along a highway. Not your usual request.

The results of the artist’s search are displayed as a series of screens on a triangular wall unit. One side contains a single screen showing the six selected animators taking turns with their pitches. They look sterile, despite their animated mouths and eyes— variations on the self-portrait, digitized and animated.

The other two sides of Steinberg’s unit each contain a row of six screens, showing the open window image and the highway scenes. The window scenes are all different and unique, but the car scenes all look similar. Perhaps individuality is expressed more poetically through a window opening onto a nature scene than it is on an industrialized highway.

Shana Hoehn’s work occupies the center of the gallery. Her piece Boggy Creek, a video consisting of two overlapping screens, is projected onto an angular, elongated sculpture, which the artist calls “a wedge.” Boggy Creek takes the form of an experimental documentary featuring a female character looking for a monster. The creek is a local attraction in the artist’s home state of Arkansas and, according to legend, there have been many Fouke Monster sightings which inspired horror movies about Bigfoot. We see a foggy and dreamlike creek, and a girl in a bright red raincoat preparing a glass rowboat fitted with a wooden ornament, similar to the ornaments on Cadillac cars but mermaid-shaped (a sculpture consisting of a Cadillac front forms part of the installation).

Hoehn’s sculptural base adds an interesting dimension to the work, with a vantage point that becomes wider, as if the viewer is physically following the story from left to right. Hoehn takes inspiration from Renaissance and Baroque painting, re-using their technique of anamorphic illusions. But here the visual distortions are in the form of moving image, with a soundtrack (a musician performs scores from the original horror films filmed around the creek). As with Steinberg’s work, a historical genre is digitized and animated.

Hoehn’s Boggy Creek seduces with its bright colors, its mysterious overhanging trees, and its unusual glass boat. It is unsettling but, in the way a horror film does, it invites you to keep watching. The lush river landscape contrasts beautifully with Steinberg’s cold corporate figures. Hoehn was inspired by her own experience of moving to Texas post-election, and being “an adolescent in an extremely conservative environment.” In her installation, the real becomes inflated with myth, just as her everyday world feels inflated with political ideology.

The third installation is by Yue Nakayama. On a triptych of screens, Love in the Time of True Blue shows three different versions of people dancing outside. On the left, a group stands on an empty patch of grass in the city, engaged in a trance-like routine with arms and legs outstretched. On the right, an individual executes similar motions against the backdrop of a petrol station. In the central screen, a woman performs her own version of a dance in front of a house, strangely solitary and peaceful.

The routine is calisthenics, often practiced in Communist China; Nakayama instructed the participants to perform these against a corporate landscape of tall buildings and petrol courts. Urban apartment blocks and the bright-colored brands of petrol stations contrast with the fluidity and concentration of the dancers, as if they are out-of-sync with their environment. Nakayama added a soundtrack of conversations with the participants as they answered 36 questions developed by psychologist Arthur Arnon, whose “choreography” of increasingly personal inquiries was meant to bring together pairs of strangers. “The greatest thing a father can do for his children is to love their mother,” we hear a man say. His female counterpart tells us, “There are benefits in two people together but also in two people separating.”

Each of the three installations is concerned with a search—for freelance animators, for monsters, and for participants on meeting platforms. The videos explore the relationships that emerge as a result of these searches. What transpires is a disconnect between the digital animations and the real people, between the surface of the creek and the mystery hidden beneath it, and between the spoken work and the dance. These three artists are interested in unresolved propositions, and in the things that can go wrong in relationships.

Steinberg’s animated men look cold, scarily similar yet de-humanized. Hoehn’s red-coated girl looks like an apparition from a dream. Against these two installations it is Nakayama’s work that is the most moving and real. We can identify with these dancers, with the beauty and the oddities of their bodies, and with the joint effort of their movements.

I Think We Meet Here is an interesting showcase of the relationships the Core program can bring about. But all three artists would benefit from strengthening another connection—with the viewer—to avoid their work becoming too theoretical and dense. This show is a proposition not yet resolved of the individual strengths and talents of its artists.