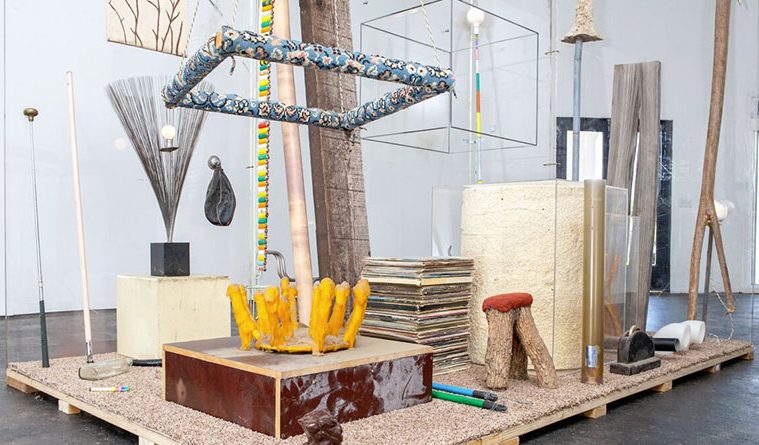 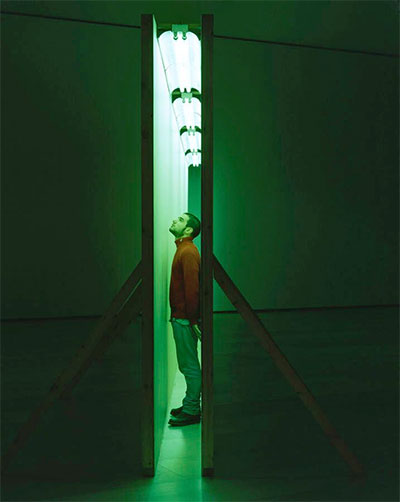 The Pathway of the Contemporary Austin’s Strange Pilgrims

Upon the completion of my first reading of Gabriel García Márquez’s short story collection Strange Pilgrims, at the tender age of 17, I closed the back cover and felt myself pitch forward into a barrage of questions. How could an author put so many of his character in harm’s way? Leave their fate to chance? Resolve close to nothing? I felt the stories, though beautiful and intricate, were unbalanced in their lack of closure. I buried the book away and only dug it out recently, when I heard The Contemporary Austin would be launching a multi-location exhibition bearing the same title as Márquez’s collection.

Revisiting the work nearly a decade later, the once-abrasive shock of fluid character arcs no longer produced the same sting, though emotional footing is a difficult commodity to come by within Márquez’s texts. Instead, his characters often find themselves thrust into moments of heightened drama. A President waits in exile. Maria dos Prazeres dreams of her impending death. Billy Sanchez worries about his injured wife in a Parisian hospital. Disassociated anxiety bleeds from story to story within Strange Pilgrims, with many narratives petering off without ever finding these desolate souls a safe harbor. Their disquiet goes unanswered and the trauma’s long-term effects rarely come to life. Just as quickly as Márquez’s storms brew, they abate.

Heather Pesanti, the head curator of The Contemporary (and lead curator of Strange Pilgrims) says the show, which opened Sept. 27 and runs through Jan. 24, seeks to explore the melancholy and isolation inherent to Strange Pilgrims but she remains quick to distance the exhibition from being a literal representation of Márquez’s work. The exhibition speaks instead to the macro questions that the author raised throughout his literary career.

Pesanti affirms that she’s always loved Márquez as an author and remembers first connecting with his works as a child. It was his use of magical realism (a literary fixture which Márquez is largely credited with bringing into prominence) that drew Pesanti in. She ventures, “The concept of magical realism just seems like such a beautiful and sensible way to see the world and all of its confusing and heartbreaking and wonderful parts. It could almost be its own religion.”

Magical realism as a philosophy seems á propos when considering the exhibition’s scope. Bruce Nauman creates work that illuminates both space and intellect. Charles Atlas finds room for dance in the confines of film, both expressing brief deviations from the norm. Some artists capture this only for a moment; others spend their entire careers moving the needle forward into uncharted aesthetics and mediums. Just as magical realism mutedly weaves the surreal into the ordinary, Pesanti’s roster of artists find new opportunities to elevate the everyday. 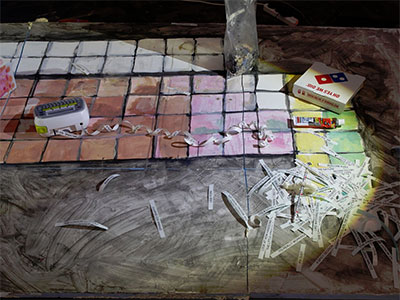 Márquez himself was something of a nomad. Colombia, Spain, and Mexico are only a few of the places he would call home over the years and the motif of isolation and displacement has been evident in numerous exhibitions at The Contemporary in recent months. The Do Ho Suh exhibition capitalized on questions of settling, while the recent Robert Therrien exhibition placed new emphasis on the mundane objects we identify with permanence (inspiring their reconsideration). Pesanti states, “There are artists [in the exhibition] from many parts of the world…and I hope the type of art displayed offers different ways of conceiving of identity through experience.” Strange Pilgrims indeed boasts an impressive and vast network of artists. With notable inclusions from Nancy Holt and Yoko Ono to more locally-celebrated names like Andy Coolquitt and the Lakes Were Rivers collective, Strange Pilgrims brings together a uniquely diverse cast of artists, incorporating performative pieces alongside digital art, sculpture alongside installation work.

But there’s still the issue of Márquez’s penchant for abandoning his characters to their existential strife, and how this tone of abandonment plays to the current state of The Contemporary. Pesanti states, “I love this idea of no resolution, and open-endedness. It is absolutely a key aspect of the exhibition. In particular, [we see that in the work of artists] Roger Hiorns, Andy Coolquitt and Trisha Baga, but [it is] a pertinent thread through the entire show, and an essential component of ‘experiential art. I think the concept of strangeness and unfamiliarity is one that the exhibition tries to embrace through its particular artists and projects. The desire for certainty and resolution is a simple human one, but ultimately an illusion – so embrace the unknown.”

At Strange Pilgrims, audiences will be greeted with a cohesive panoply of contemporary art and simultaneously encouraged to ask questions regarding the physical and internal spaces we occupy. Márquez’s fantastical world of magical realism, fatalism, and existential conundrums vastly helps narrate the Strange Pilgrims collection, and while Pesanti strays from too direct a link, the show’s exploratory tone leaves audiences unencumbered to delve into a philosophical journey that Márquez would be proud of. 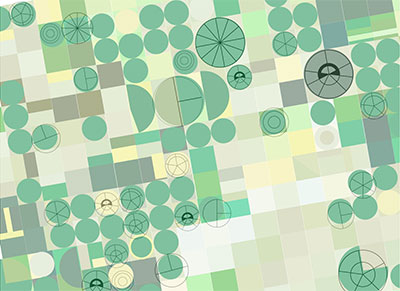 But Strange Pilgrims as an exhibition itself represents another adventure into the unknown, as the museum branches out to include the University of Texas Visual Arts Center as an auxiliary gallery space in addition to its Jones Center and Laguna Gloria locations. This expansion comes out of necessity. The Contemporary’s ambitious programming renders the somewhat diminutive Jones Center inadequate to host all of the Strange Pilgrims works. Laguna Gloria will showcase many of the sculptural pieces but questions remained as to whether the show would need to shift in scale or outsource gallery walls. A solution emerged in the latter; just as Márquez’s characters exist in limbo, arguably so does The Contemporary. Though its plans for a Jones Center renovation were recently announced, how the museum plans to move forward after its grand reopening in Fall 2016, without gaining any more square footage, has yet to be seen.

Márquez’s Strange Pilgrims ignites the imagination, despite the somber fortune of its characters. Pesanti seems to hope that level of introspection will bleed into the exhibition and, with The Contemporary’s past-programming to draw from, I expect nothing less. But as Márquez often leaves loose ends for his readers to mull over, I find myself imagining what might be next for The Contemporary as it continues to embrace ever-grander exhibitions. As the museum’s standards continue to rise, The Contemporary will be forced to write a new narrative and move beyond its past mission to establish credibility under a new direction and staff. The shock of trying to cultivate interest in a town that had been unable to elevate its own contemporary arts institution for years has worn off. Simply put: where do we go from here?