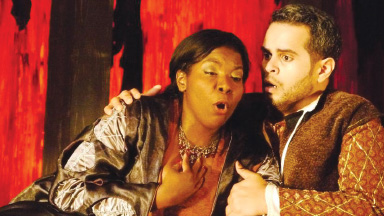 With hidden identities, passionate love, and a gypsy’s vicious revenge, it is no wonder that Verdi’s dramatic “Il Trovatore” remains so popular. It’s a task to add passion to this already effusive opera, but this is precisely what sets Opera in the Heights (OH!) apart in their production — it draws out emotion to the point of tasting it.

This is the final production in Oh!’s season and acts as a striking preview of the season to come. It also marks the end of artistic director Enrique Carreón-Robledo’s first season at Oh! A precise and enthusiastic director, Carreón-Robledo’s second season — which is an all-Shakespeare line-up including two Houston premieres — will no doubt also bring new energy to operas of old.

The visual aspect was at its height when the gypsies took the stage in Act Two. Stage Director Brian Byrnes captured the ghostly essence in a trick of shadows and lighting. As Azucena relays the horrible truth about her mother’s death amid disgruntled-looking gypsies, a shadow of blue light dances behind her on the wall, making it easy to imagine it is her mother’s apparition indeed swooping in as an owl.

Oh! makes this opera more than a spectator’s sport: it is permeating, palpable, and incredibly real. To feel horror is natural — any time a gypsy recalls an infant’s flesh charred by fire is an obvious monstrosity. But the unique experience of being able to see the singer’s expressions — the very eyes of Azucena pop as she makes cries of revenge — is exclusively to be had at this venue.

By the vengeful close, the opera seems to be much less in 15th-century Spain and more in the reality of all. With uncommon flair, Oh! breeds a complete immersion in the music. Expect that even after the final curtain has dropped, hairs will still be standing on end.