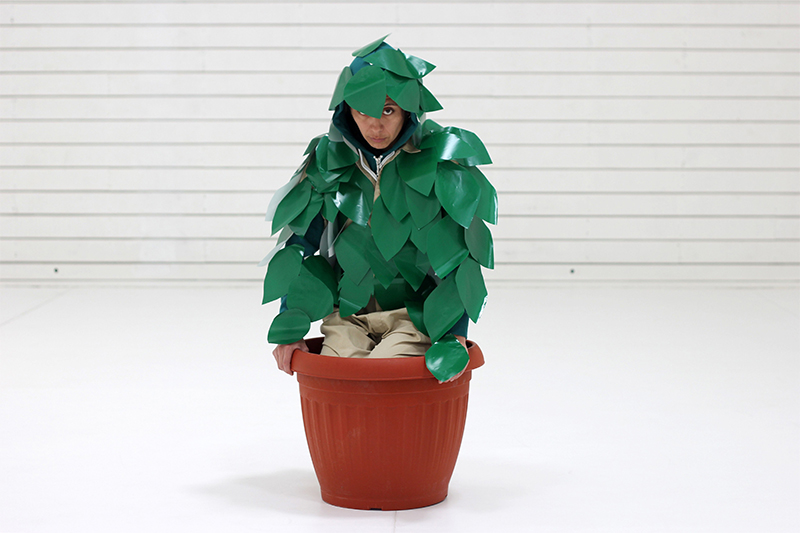 In a city filled with festivals, Fusebox forges its own path

This is how you might experience Fusebox Festival this year, running April 16-21.

You start at the festival hub, a pop-up venue staged in a former warehouse in the eastern part of downtown Austin. Artist Justin Favela has covered the exterior with small, fluttering strips of paper made to look like a giant piñata.

Inside, smaller piñata artworks will adorn the space where, for each of the five fest nights, there’s a different line-up of all manner of the live, performed arts. And perhaps in the hub you’ll run into Roberto Jackson Harrington, whose beguiling hand-held Museum of Pocket Art will display a miniature version of Favela’s piñata artwork.

Like all Fusebox events, admission to the hub’s nightly performance showcase is free. Five years ago, on Fusebox’s tenth anniversary, festival founder and artistic director Ron Berry found a way take the money out of the ticket transaction. Yes, there’s still a reservation system for many of the intimately-scaled shows. But admission is free as a way to eliminate at least one significant barrier between a potential audience and the more experimental arts.

After a night at the hub, you might the next day head two miles downtown to the Long Center’s Rollins Studio Theatre. There, in the sleek black box venue, Chilean theater artist Manuela Infante will deliver her riveting one-woman show Estado Vegetal, or Vegetative State. Infante’s wordless, movement- and prop-based show considers the emerging scientific theories of plant intelligence and plant communication and how we might use them to develop a new relationship to nature.

A third day of Fusebox might take you back over to the Eastside where, at the Ground Floor Theatre, you join a very small audience to watch Michelle Ellsworth’s The Rehearsal Artist.”An exploration of watching and being watched, Ellsworth’s curious performance will have you observe a dancer who is simultaneously watching reenactments of scenes from 2001: A Space Odyssey, and participating in her own mash-up of retro social science experiments.

On Fusebox’s last day, a team of Austin sound artists, who work under the moniker Rolling Ryot, will transform an entire state parking garage just blocks from the Texas State Capitol into Rainforest Reverb, an immersive sound environment that mimics the sonic palette of an endangered eco-system. Roaming the parking garage, you might run into people you know. You might meet new people.

If free admission is a strategy to offer people more entrance points to the festival, so is Fusebox’s ever-shifting footprint. “We keep exploring in our own city, and finding new places to do things,” says Berry. “It helps us embed in different ways in our community, presents us with different ways to connect with different people or different organizations.”

A Houston native, Berry started Fusebox in 2004 with just a $5,000 budget. The event was just one day, and but for a pair of New Yorkers, featured only Austin artists. Everything happened in one small venue too, the now-gone Blue Theater, from which at the time Berry operated the multi-disciplinary Refraction Arts Project, an organizational progenitor to Fusebox.

Now, Fusebox has an annual organizational budget of $750,000, a full-time staff of eight and each year hosts a different line-up of artists from around the world alongside local and regional talent. In 2017, the organization added two curator positions, with Anna Gallagher-Ross and Betelhem Makonnen now joining Berry in shaping the artistic direction of the organization.

Yet as a city that’s based its international profile on the mothership of festivals — South By Southwest — Austin might also be the most festival fatigued of modern metropolises. How does a performance art festival distinguish itself?

For Berry, it’s always been a question of what a festival can be beyond its once-a-year happenings. Earlier this year Fusebox co-presented a touring show from Belgium, Zvizdal (Chernobyl, So Far — So Close), a foray into programming performance beyond the festival.

But it’s the less-expected efforts Fusebox has engaged that distinguish it.

“We’ve always considered our community — in Austin, in East Austin,” says Berry. “I mean, we all live here when the festival is not going on and so what is happening with our community, understanding its history, getting to know people — that’s always been important to us.”

Important enough that Fusebox took an unusual detour of sorts in 2014 when it partnered with developers who planned a mixed-use development on a former brownfield in East Austin that would include affordable housing and affordable space for artists. Fusebox netted a $400,000 grant from Artplace America for the creation of a masterplan, staging a “living charette” during the 2015 festival, a pop-up creative think tank with some 66 happenings — most artist-led — that engaged community members and the public in brainstorming about what was needed most from new investment in an historically underserved neighborhood.

While Fusebox’s efforts didn’t result in an arts space of its affordable own at the yet-to-be finished development, that’s nothing to regret, Berry says.

“We learned so much. And we got to know so many people in our city we might not have otherwise had the chance to get to know,” he says.

In other words the Fusebox folks spent time in a place and a space with others. It was live.