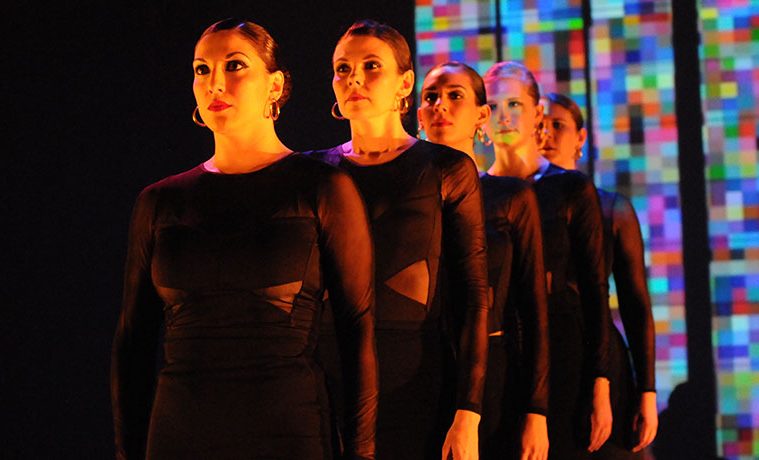 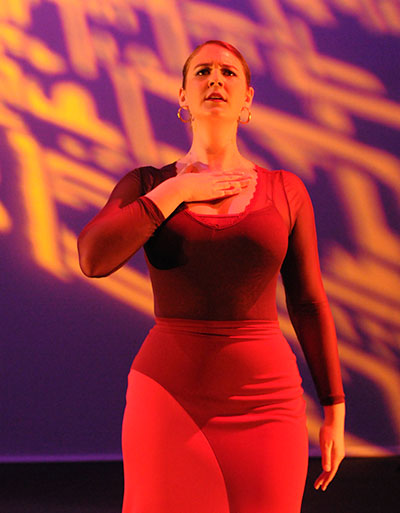 I danced my first solo when I was 10 years old, in a flamenco competition for an audience of 800. Though I was filled with anticipation before taking the stage, my anxiety would have been easily doubled had I been preparing to make a speech, even in front of just my 20-person fifth grade class.

I was a shy kid, generally speaking, but I’d discovered flamenco dance as my mode of expression when I was eight years old while growing up in Santa Barbara, California, a city that celebrates its Hispanic heritage with a week-long festival each summer called Old Spanish Days Fiesta. The public stages, set up in plazas all over town, are filled with flamenco music and dance from morning to night. During Fiesta, I’d perform in as many as seven shows per day.

Though I’d started in ballet class when I was three years old, and would make my way up the levels to dance en pointe in large-scale theater productions, flamenco appealed to me because it can be danced practically anywhere, anytime. This instilled in me a certain sense of freedom that contrasted with the controlled world of ballet, which demands the right conditions for performance and, by extension, expression.

Twenty years later, flamenco is still the medium through which I best express myself, perhaps because, historically, the very point of flamenco is self-expression. Since moving to Austin in 2010, I’ve danced with A’lante Flamenco Dance Ensemble, a company of six dancers and six musicians directed by husband-and-wife team Olivia Chacón (artistic director) and Isaí Chacón (musical director). We perform regularly in Austin, San Antonio and beyond at theaters, festivals, restaurants, museums, retirement homes, weddings, wineries, even libraries—really anywhere we can squeeze a wooden floorboard to do rhythmic footwork on.

In its purest form, flamenco isn’t so much an art but a way of life. The dance evolved out of the cante (song) of the persecuted gypsies of southern Spain, who used it as release from the hardships of daily life. It’s made up of various palos, or genres. Some palos exude joy (such as the alegría or tango) and are usually performed in celebratory contexts; others have a playful or joking quality (the bulería, for example), perfect for shooting the breeze in a relaxed atmosphere; and yet other palos are solemn, intended to communicate unspoken fears, sorrow and loneliness (such as the soleá and siguiriya). 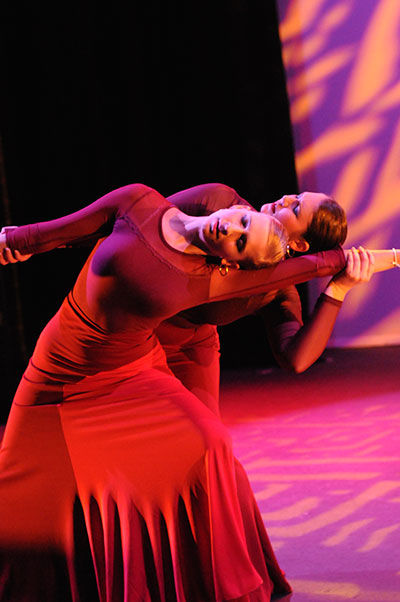 Kara Lealand and Claire Spera dance a duet in “On Love” from Prophecies. Photo by Pete Flaig.

For every life moment, there’s a palo for that.

Flamenco became even more important to me after I was diagnosed with breast cancer at the age of 27 in February 2014. The flamenco studio was where I could go both to forget about how my life had changed since the diagnosis, and to process the effects of treatment. While undergoing chemotherapy, I was aware of my waning strength; after my bilateral mastectomy, I had to get used to my new body; and during radiation, sweating oftentimes irritated the burned skin of my trunk. There were unspoken fears, sorrow and loneliness, but there were also moments of pure joy. Flamenco really can be danced anywhere, anytime — even in chemotherapy infusion rooms. That was how we celebrated my last chemo, amongst the recliner chairs and the hanging bags of drugs: por bulerías.

For every life moment, there’s a palo for that.

Since my return to the studio, we’ve been preparing for another run of A’lante Flamenco’s latest theater show, Prophecies, which had its premiere in Austin last January, just before my diagnosis, and which garnered the company “Best Dance Ensemble” by the 2013-2014 Austin Critics’ Table Awards. The production plays this Jan.10 – 11 at San Antonio’s Tobin Center and Jan. 31 -Feb. 1 at Austin’s Boyd Vance Theater at the Carver Cultural Center.

Prophecies is a re-imagining of The Prophet, Kahlil Gibran’s 1923 masterpiece of philosophical, poetic prose. The show’s choreography and music mix traditional flamenco with modern elements, unveiling a collection of palos that map to life themes: love, religion, work and friendship.

As dancers, we go from creating rhythms using our customary heeled flamenco shoes to performing barefoot, the rhythms emanating from jangling bells strapped around our ankles. The music includes not only traditional guitar playing and singing, but also violin and percussive instruments. Flamenco, among its other merits, is an adaptable art.

No matter the life moment, there’s a palo for that.