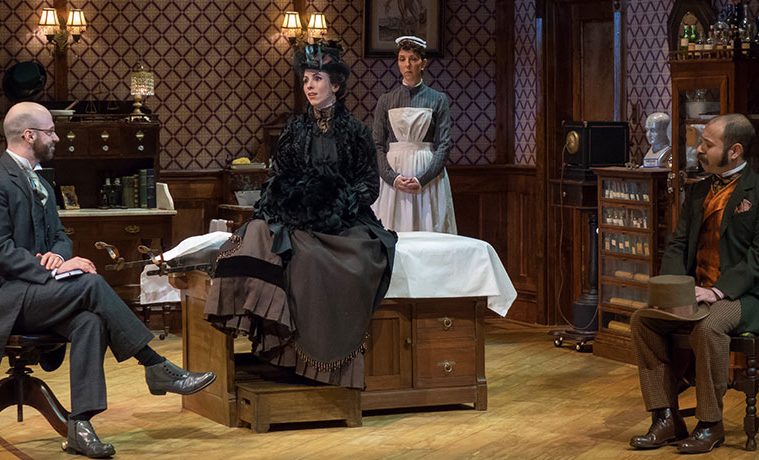 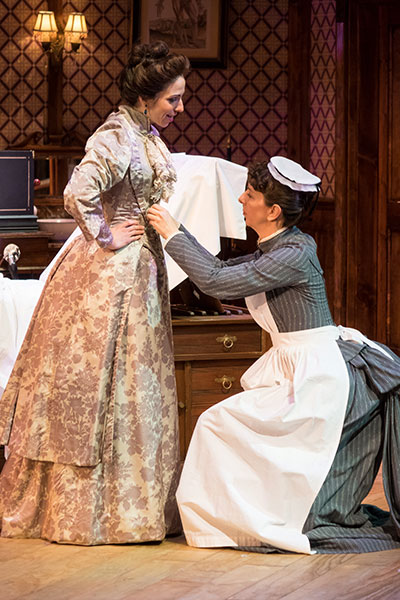 Set in the unique time when electricity and proto-psychology were novel and unsettling, the play details the personal and professional life of Dr. Givings and Mrs. Catherine Givings, played by Craig Mungavin and Jill Blackwood, respectively. The couple keeps an electric lamp in their living room which simultaneously fascinates and nauseates their guests. Popular misgivings about the future of post-Civil War America are evident in the constant turning off and on of the lamp, which provides light but lacks the tenderness, warmth and fire hazards of the candelabra.

His therapy comes with a level of unspoken violation in that he that through his scientific perspective he has the medical authority to invade female sexuality. When the device does elicit the desired results, Dr. Givings is only capable of jumping to the masculine conclusion that the machine needs to be turned up to eleven. In fact, the tender hand of his wise assistant Annie, played by Irene White, can bring sanity to the hysterical far better than any machine. Craig Mungavin captures the insecurities of a man whose outsourced all notions of intimacy to electrical automation. 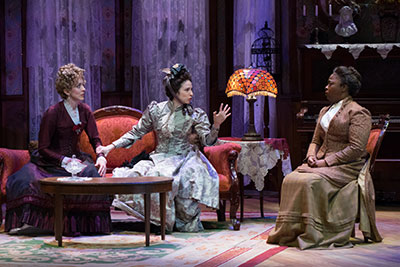 Moria Clinton’s costume design goes far beyond simply placing the work in history, because the audience gets to see all of the layers of clothing underneath the elaborate gowns of the era. Only when his patients gain secret access to the machine are they able to please themselves while still wearing the gown, thereby becoming masters of their own orgasms in spite of the constraints of sexist customs.

Perhaps most sexual frustrated of them all is the doctor’s wife, Mrs. Catherine Givings, played by Jill Blackwood, who the doctor will not permit to use the vibrator for fear that it would undermine his medical legitimacy. Instead, he insists that she is healthy and doesn’t need such therapies. However, his medical legitimacy is only thinly veiled guise for his own inability to express himself sexually. Mrs. Givings is forever stuck inside, wondering what day it is and lamenting her inability to provide milk to her newborn child. She reaches out to one of her husbands male patients (he has a separate device for the prostate) not out of sexual promiscuity, but out of a fundamental desperation to hold and be held. There is nothing hysterical about the alienation induced by a lack of touch.

The roles are reversed as Mrs. Catherine treats her husbands emotional dishonesty and insecurity. She follows a similar procedure and asks him to de-robe out in the snow. Amidst the sentimental tintinnabulations of Arvo Part’s Spiegel im Spiegel, the couple embraces in a well deserved moment of tenderness that can’t be electrically reproduced, not then and not now.