Whether you are rolling down the window in your grandfather’s car, or waving to answer a call on your shiny new Apple Watch, movement and choreography, really, are part of our everyday life. The movements change as technology shifts, all of which feels like perfect fodder for a new dance, according to choreographer/technologist Sydney Skybetter.

METdance artistic director Marlana Walsh Doyle and Skybetter have been in orbiting dance circles though their Dance USA connection for a while now. “We have been talking about this work and him coming to METdance for about five plus years,” admits Doyle. “I have followed his work and have seen the shifts with time.” To help set the piece, Skybetter also brought in Kile Hotchkiss, who he describes as “utterly invaluable as a collaborator through the process.” 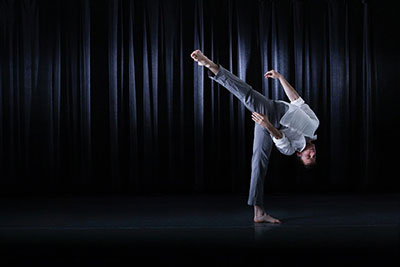 Skybetter’s new work, oso | sos, is a group effort, in that the dancers contributed various gestures that found their way into the dance. MET dancer Mia Angelini describes the process. “He gave us numerous tasks throughout the two weeks and  allowed the phrases we created to become part of the work. The collaborative process was very enlightening and  showed us a different avenue of composing a new work.”

MET dancer Julie DeGregorio describes her own contribution. “My recollection of my first dance recital vividly evokes a sequined feather from my dress scratching my eye prior to going on stage,” says DeGregorio. “This is depicted as the dress phrase. It has us defining the area around us where a dress would lie and a gesture in which we sweep over our eye with our pointer finger. Both actions symbolizize my childhood memory.”

Skybetter visited with A + C editor in chief Nancy Wozny about the new work, developing and defunct gestures, and the dancing that might result from your new Apple Watch.

Your dance contains movements that we do and used to do. Or at least some of us. Talk about defunct gestures.

The other day in class, I mimed the typing of a few keys on a typewriter and mime-slapped a return carriage to indicate that I was moving on to the next paragraph of my lecture. I looked up at my audience to see if my attempt at a gestural joke had landed, and boy had it not. It became clear they recognized that I’d been typing on something, but had no idea what the slapping aspect signified. Was I swiping left or right? Was I throwing away my iPhone for some reason? It was at this moment that I realized that gestures have  communicative shelf lives, and that I should never, ever try to be funny. 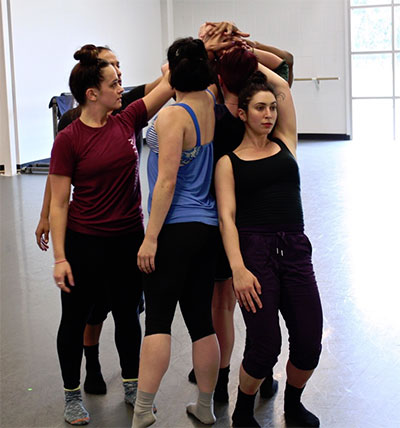 You are often funny. So, get over that. Tell us more about this tech/choreography/gesture phenomenon.

Lately I’ve been doing research on an odd class of emerging technologies we’ve been calling choreographic interface mechanisms. The premise of this tech is that choreographed movement patterns become an interface between one’s intentions and an internet-connected device’s actions. (Think: accepting a phone call by giving your Apple Watch a “thumb’s up” gesture.)

I may get one just  to do that.

It’s an odd little subcategory, and a fascinating lens to consider the complexity and frequent failures of our bodies to accurately communicate one’s intention. These gestures mean wildly different things, depending on when and where you are in the world. The “thumb’s up” gesture is a sign of general affirmation in most part of the west, but in Thailand, it could get you killed. Or, think about the last time you rolled a window up or down in your car, or wound a watch, or slapped the carriage return of a typewriter.

I have mad desire to do all of those things now. But then again, when Marlana made the gesture of turning off a light with a pull chain, I had to have you translate it for me. It’s defunct in my world it seems.

These are gestures that, in their day, could be understood in the absence of the mechanical contrivance that necessitated some particular motion. In the absence of, well, manual windows in cars, manual watches and manual typewriters, these gestures lose their meaning over time, and disappear. It was the inevitable decline of gestures’ abilities to communicate that started the creative process of oso|sos. It was a choreographed response to the question of how well- and how poorly- our bodies communicate, and how even seemingly natural modes of communication are governed by time and personal experience.

Give me an example of how a gesture appears in many iterations in your dance.

One day in rehearsal, Kiki jokingly made a movement phrase based on a series of defunct hand gestures, and it reminded me of flag semaphore, the verging extinct use of flags to communicate during naval exercises. We immediately incorporated the phrase into the dance and called, “Kiki Semaphore.” This is one of maybe a couple dozen examples of how a single gesture was turned into a big danceydance. There’s probably half dozen variations of “Kiki Semaphore” in oso|sos. Marlana does a painfully slow variation at the end of the dance, Jesus does one with a booty pop, Patty does one like she’s channeling Catherine Deneuve. These gestures circulate through the dancers like memes- they’re shared, improved on, repeated and eventually, abandoned.

You are damn good at moving gestures through space rather than people standing in place and waving at us. We’ve seen enough of that in our post modern lives.

The gestural material was an entry point, a kind of first collaborative foray with the dancers of the Met. I’d originally thought to have a bunch of sections where the dancers would be stationary and hand gesture to each other- but what kind of probably boring slash terrible dance would that be? To say nothing of the waste of dancerly talent. Marlana has a *world class* company of phenomenal movers. They’re able to do the tiniest, most delicate hand gestures while tearing across the floor in giant bounds. The dead gestures were a creative catalyst for me as a choreographer, this dance was brought to life with the incredible dancers at the Met.

They really are truly fabulous and your dance brought something new out in them.

This piece is filled with private moments from rehearsal, moments where the dancers did incredible things while they thought I wasn’t paying attention, moments where I’d make a compositional suggestion and then they’d whip out something a million times better. This process was intensely collaborative- and I wanted the resulting work to honor the dancers’ creative contributions. Every time someone does the “Kiki Semaphore,” they’re replaying a tiny, nearly private moment from rehearsal before a giant audience. The dance is a time capsule of dying or dead gestures, sure, but equally and vitally, also of the two-week period in 2015 when the piece was made.

I feel that exactly in the dance. oso | sos also has a connective tone, as in people telling each other things, talking with their hands, while traveling at high speeds across the stage.

Talking with their hands, or at least, they’re trying to! If the dance is about any one thing, it’s about failures to communicate.

Funny how the more ways we have to communicate, the less is sometimes said.

There are moments of tenderness and shared intention in oso|sos, but more frequently it’s an exploration of disparities in intention, and how we can say one thing but mean another. For me, gestural technology is a perfect little prism of human foibles—it rarely works and is functionally nonsensical—yet we carry on with our communications because of this fundamental urge to share with others. The dance then, is about both intimacy and distance, and how we inevitably have to go through one to get to the other.