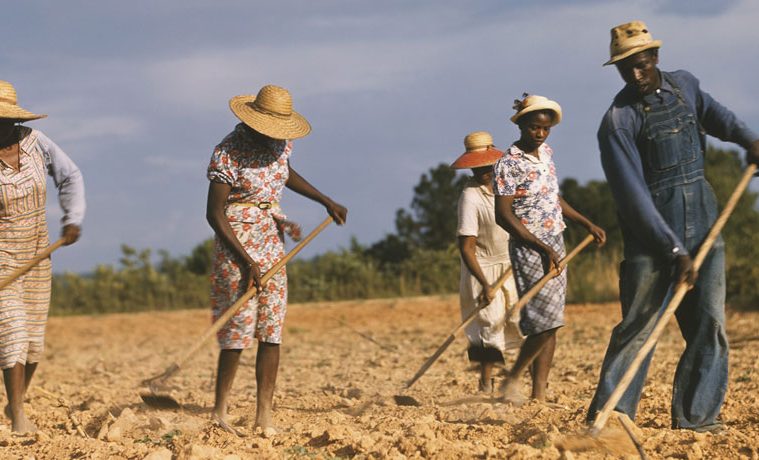 Notes on Color!, Antonio Berni, and 9.5 Theses on Art and Class 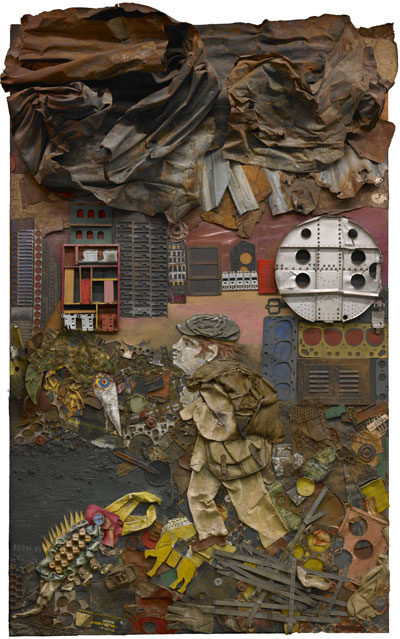 The second or third photograph you see in the Amon Carter Museum of American Art’s fascinating exhibition, Color! American Photography Transformed is an untitled 1851 color plate by Levi L. Hill, an obscure backwoods tinkerer who kept the photography world anxiously waiting for years with unfulfilled promises to share his results and his process. Alas, he died in 1865 without ever really understanding how he had managed to directly record red and green (though he apparently never managed to get clear yellows and blues). Scientists still don’t know how he did it.

That’s what makes the first photograph you see—Cory Arcangel’s Photoshop CS, 300 DPI, RGB, square pixels, default gradient “Spectrum,” mousedown y=1416 x=1000, mouseup y=208 x=42 (2009)—such a wickedly apt opening move by John Rohrbach, the Amon Carter’s senior curator of photographs. Part of Arcangel’s Photoshop Gradient Demonstration series, it encapsulates the long-cherished desire to put photography on par with painting and the accelerating democratization of new media; at 72-by-110 inches, its scale and vivid hues evoke Color Field painting. The title of Arcangel’s piece does what Hill never could: it tells you exactly how to replicate his results, which don’t even require a camera, and which he achieved with infinitely less exertion than went into Hill’s efforts.

Anxiety about the relationship between color photography and the art world pervades the history traced by Color!, which is on view through Jan. 5.Walking through the show, I kept thinking of a passage from Ben Davis’s recent book 9.5 Theses on Art and Class that dovetails with the narrative arc of Rohrbach’s exhibition and accompanying catalogue.

Indeed, many of the “fine artists” featured in Color! (not to mention their curatorial champions) come off looking less avant-garde than arrière-garde with respect to what their counterparts in the “culture industries” were producing. 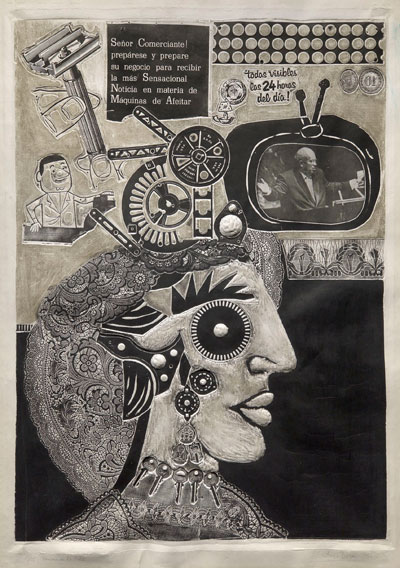 “The self-appointed leader of the blossoming community of fine-art photographers, Alfred Stieglitz, and many of his closest followers had decided shortly after the introduction of the Autochrome in 1907 that color photographs looked wrong unless their hues reflected the world in realistic ways,” Rohrbach writes. “That stance had caused them to quickly dismiss color photography because mirroring sight ran counter to art’s reliance on interpretation. Yet the color photographs in the Condé Nast magazines, on advertising posters, and in the form of tricolor carbro prints through the early and mid-1930s had shown how straightforward color photographs attracted the eye in their very directness; color was more informative, and it made photographs more entertaining.”

Artists kept playing catch-up as color increasingly swamped popular culture and amateur photography; many came to take their cues from both, and in 1976 Museum of Modern Art photography curator John Szarkowski gave William Eggleston a major solo exhibition for his now-iconic photos combining a snapshot aesthetic with a mastery of the dye imbibition process that “allowed Eggleston to draw attention to color without making it the subject of the photograph,” Rohrbach writes. (In this respect it recalls Jack Delano’s extraordinary 1941 Kodachrome transparency of black Georgia farm workers hoeing cotton, taken while he worked for the federal government’s Farm Security Administration photographic bureau. Delano’s picture is one of the few pre-1970s works to strike that balance.)

Though Eggleston’s MoMA exhibition was panned by mainstream critics such as Hilton Kramer, Janet Malcolm and Gene Thornton, the tide had irrevocably turned. “No longer was color photography a stepchild of black-and-white,” Rohrbach writes. “No longer did it have to carry the burden of being viewed as better suited to commercial uses.”

This “absorption of color instigated a widespread acceptance of a fundamentally new definition of photography, one that openly blends photography’s documentary foundations with the creative flexibility of painting,” he writes. “In this shift … photography finally, once and for all, was delivered from its second-class artistic status.” 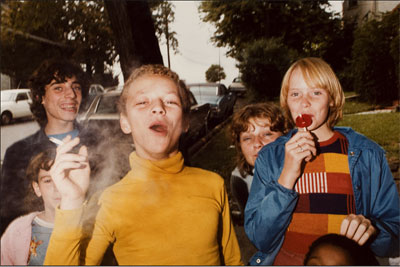 Meanwhile, American painters, equally besieged by the rise of the culture industries, had increasingly integrated fragments of popular culture into their paintings, most famously in the work of Robert Rauschenberg and Andy Warhol. Equally innovative and important, but far less widely known, are the simultaneous explorations of Antonio Berni, an Argentine artist who divided his time between Buenos Aires and Paris and pioneered his own distinctive variation on the “New Realisms” exemplified by American Pop and European Nouveau Réalisme. His two most important series, created over a period spanning 1959 to the late 1970s, are the subject of the Museum of Fine Arts, Houston exhibition Antonio Berni: Juanito and Ramona, on view through Jan. 26.

Like Rauschenberg with his combine paintings, Berni began integrating not only photographic images and ephemera but all kinds of castoff materials with paint into often-monumental assemblages. Both were operating in a gap between art and life, as Rauschenberg said he wanted to do. But where Rauschenberg’s “flatbed” compositions disrupted viewers’ attempts to read their meanings, Berni’s materials came together to form the worlds (and often the bodies) of his two archetypal characters, Juanito Laguna and Ramona Montiel, while commenting on postindustrial capitalism and its consequences.

“I realized that there was a pathetic sort of decoration scattered in empty lots on poor streets, a sample of all the materials used to make that world,” Berni said in 1972 of the Juanito assemblages, which depict a child of immigrants who moves to Buenos Aires, where he lives in a shantytown. “There were rusty bits of tin, broken wooden boxes, old brooms, tarred sheet metal. … Before I chose those materials I felt them, mute and seemingly unimportant expressions of a terrible reality. When I stuck them on the canvas they gave my paintings the realism I was looking for, a realism that I had to express.” 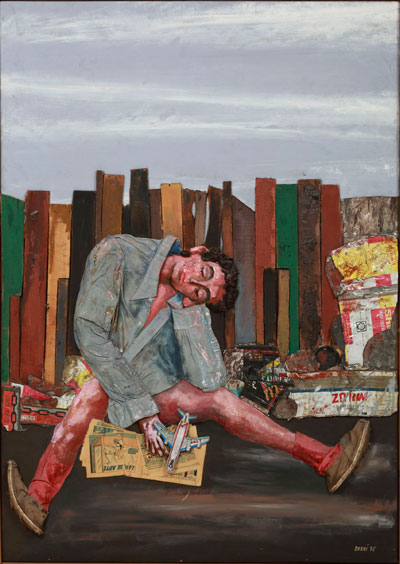 Also like Rauschenberg, Berni in the 1960s proved to be a tremendously innovative printmaker; in 1962, he was awarded the international grand prize for printmaking and drawing at the Venice Biennale for his “xylo-collage” technique, which he went on to develop most radically in his Ramona series about a young seamstress who is eventually drawn into cabaret life and prostitution. Berni applied lace, fabrics and bric-a-brac from Parisian flea markets, souvenir shops and cheap costume-jewelry arcades to his woodblocks before inking them and printing them on large sheets of paper, which then reflected the found objects in relief.

“(Berni) narrates the world he wants to analyze by dissecting the bodies of its leading protagonists; materials found in the streets burst apart on Ramona’s body, a body that is also organized as each of its parts is re-signified in a process of potential mutation into something else,” writes catalogue contributor Andrea Giunta.

As I thought about what makes Berni’s work so powerful, another passage from Davis’s book popped into my head—the part where he talks about “judging how (an artwork) plugs into a larger conversation, at least on two distinct levels.”

Berni’s work, as technically innovative as Rauschenberg’s, doesn’t just connect with, build upon, and challenge “an audience’s understanding of what ‘art’ is in society today”—the “horizontal” level of analysis, as Davis puts it. It succeeds on Davis’s “‘vertical’ level of reference, the way a particular artistic gesture is rooted in the earth of its social present, the energies and forces of the world that surrounds it.”

Not just the art world, but the world at large.