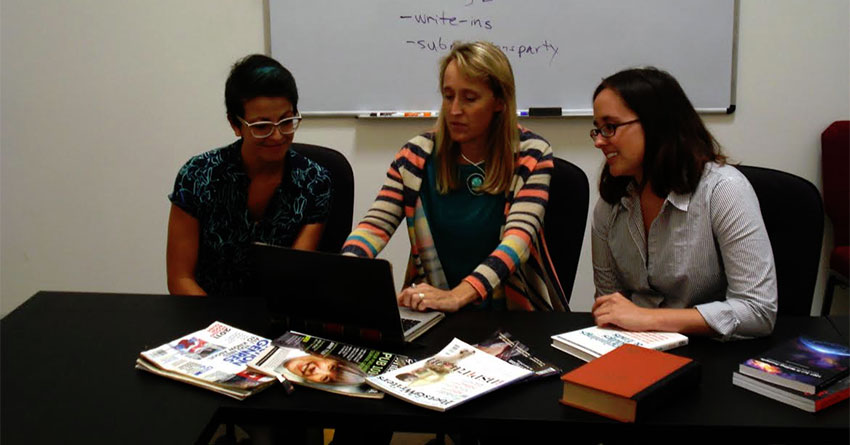 Ten minutes into the meeting, the group turns from pizza party planning to the question of brochures—specifically, should they staple them? The six young women ponder this between giggles while the café around them, a converted Houston warehouse, swallows their voices. Won’t the stapling be time consuming? Will they have access to quality office equipment?

“If not, I’ll use my own stapler,” one woman says.

“Between your stapler and my hole-punch,” Layla Al-Bedawi laughs, “I think we got this.”

This seems more like a group of high school students planning a presentation than what it actually is: the staff behind Writefest, a new literary arts festival taking place next year from February 22 to 28, 2016. The festival consists of a week of workshops led by local writers, like poet Anis Shivani and Gulf Coast editor Adrienne Perry, culminating in a weekend of presentations, panels, and readings. Though the festival is months away, there are plenty of crucial questions about finalizing panel topics, potentially free Uber rides, and, yes, to staple or not to staple.

Writefest is a project of Writespace, a literary nonprofit founded just last year by Elizabeth White-Olsen, whose core mission is to provide a friendly literary space in Houston. Her organization hosts writing workshops, readings by local authors, and write-ins, which are low-key events where strangers can come together and type or scribble side-by-side. Anyone is welcome, regardless of experience.

In the last year, White-Olsen has brought in ambitious young staff members to invent their own projects and to pursue them. “Right now, I’m pretty much planning my own dream event,” Al-Bedawi, Writefest’s director, tells me after the meeting. This is more or less how Writespace operates: if you can imagine it, you can build it. Or try to, at least.

Al-Bedawi has never planned or run a literary festival before. Not even close. And neither has anyone else on her staff of volunteers and advisers. “Everything we do, we’re doing for the first time. We wrote our first grant proposal [for the Houston Arts Alliance], and it was successful. We built our first website, and it looks amazing. We’re learning as we go.”

For now, lack of experience seems to be helping Writefest rather than hindering it. When one knows the inner workings of the literary world—or any world, for that matter—one has a tendency to think in terms of what can’t happen. In fact, whenever I mention Writefest to more “seasoned” members of Houston’s literary establishment, they seem incredulous about the festival’s prospects, while also seeming surprised that the whole thing has come so far so quickly.

Writefest bills itself as “a literary journal festival,” and it’s one of the few festivals to focus on short forms: poetry, flash fiction, personal essays. “Our mentorship opportunities,” Al-Bedawi says, “all come from literary journal editors,” and the journals represented range from renowned fare like McSweeney’s, and the speculative fiction magazine Strange Horizons, to smaller publications like, Booth and Brevity. The editors of these and more publications will give presentations and hold panels. Al-Bedawi wants Writefest to help aspiring Houston authors become acquainted with the literary landscape, hopefully dismantling the notion that the writing game is insular and elitist.

“I always say I’m my own target market for this event,” she tells me, and one has to be that invested when working for upstart nonprofits, which often provide compensation in abstractions like “experience.” In other words, nobody running Writefest gets paid. But for Al-Bedawi, a young writer just beginning to publish in small magazines, the experience of managing something like Writefest is more valuable than money. In a way, she’s betting on the potential longevity of White-Olsen’s vision for Writespace. “I don’t know if it sounds cliché,” Al-Bedawi says, “but getting in on the ground floor and building a thing like this is exciting.”

Of course, there are dangers to prioritizing enthusiasm over experience, and it remains to be seen how Writespace will make its name within Houston’s competitive literary landscape, where the venerable nonprofit Inprint, similar in philosophy to Writespace, nabs headlines with its Margarett Root Brown Reading Series (which, so far this year, has brought in Jonathan Franzen and Sandra Cisneros), its writing workshops, and its deep involvement with the University of Houston Creative Writing Program.

But Al-Bedawi doesn’t think about Houston’s literary landscape as a challenge. “The Houston literary community is blowing me away,” she says. She describes something she has witnessed several times since getting involved with Writespace: a person coming to one of the organization’s events and revealing afterward that they’d never been in a room full of writers before. So where does someone go from there? Writefest, perhaps, is for an amateur ready to take the next step into the literary world—and in putting this festival together, Writespace is taking a next step of its own.