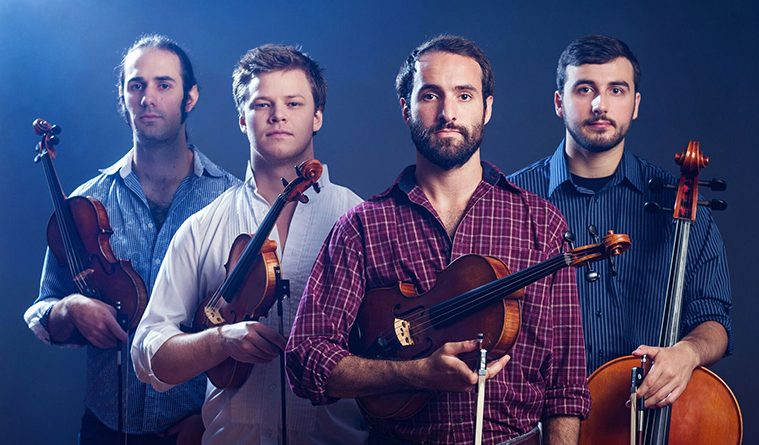 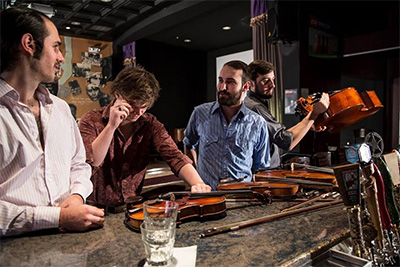 Take one look at Invoke’s website and it’s clear they’re not your typical classical string quartet.   Absent are the standard tuxedo-clad headshots, instruments clutched by their sides, and the formal, dry biographies. Instead, the quartet’s “headshots” are abstract black-ink portraits, and their bios are delightfully accessible, purporting a love of “Kirkland brand everything” as well as a Q&A section with questions like, “Hey, your tunes are rad! How do I book you guys?”

Alums of the University of Maryland, Nick Montopoli (violin/banjo), Zachariah Matteson (violin), Karl Mitze (viola/mandolin) and Geoff Manyin (cello) are the 2016-2018 Young Professional String Quartet in Residence at the University of Texas at Austin’s Butler School of Music, where they are studying under the renowned Miró Quartet.

Invoke’s music is as unique as its website. While classical-based, it incorporates bluegrass, Appalachian fiddle tunes, American folk, jazz and more to create a style not easily defined.

The four musicians overlapped at the University of Maryland and all happened to attend the Sienna Summer Music Festival in Italy, an opera-based festival that existed exactly one year and had a small chamber music component. It was there that they all first played together.

They then decided to apply to study under the Miró Quartet at the Butler School of Music after hearing about the Young Professional String Quartet in Residence program from the Aeolus Quartet, another group that had worked with the Miró.

The program at the Butler School, said Montopoli, has been “very intense but great for us. It has allowed us time and space in which to hone in on the quartet.”

While students at the University of Maryland, Montopoli, Matteson, Mitze and Manyin had to “fit” the quartet in around their academic, teaching and other gig-playing responsibilities: “We didn’t really have the opportunity to focus solely on the quartet until we took the plunge and came to Texas,” said Montopoli.

Studying under the Miró Quartet has not only allowed them to hone their technique and style, but also to work on the business side of the quartet. “The Miró have taught us that you have to make all the logistics run smoothly so that the music-making part can run smoothly.” 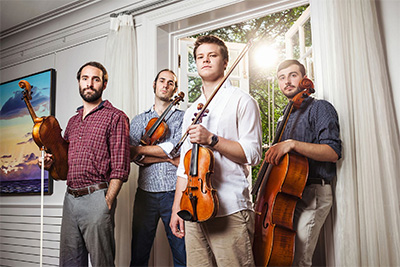 Invoke writes a lot of its own music and wants to encourage other budding musicians to do the same. In August, they spent a week in Annapolis, Maryland, teaching a music-writing workshop to young music students. This fall, they plan to collaborate with the University of Texas String Project to do the same with its elementary school students.

“The Miró have been very encouraging,” said Montopoli. “They’ve helped us with every aspect of our own style.”

Although the Miró Quartet is a classical group, its members are “amazing musicians in a broad sense,” said Montopoli, explaining that violinist William Fedkenheuer was a champion fiddle player in Canada, while violist John Largess is able to lend vocal experience to Invoke.

Montopoli describes Invoke’s style as a synthesis of everything the quartet members like to listen to.

“It’s hard to put into a specific genre, but that’s OK by us,” he explained, adding, “Our music is classically satisfying in an academic way in that it’s compositionally sound, but also down-to-earth. It’s classical mixed with folk. People see that we’re not putting on a false front. We’re experimental but we’re very genuine with what we do. People come into our concerts not quite knowing what they’re going to get, and that’s fine by us.”

And audiences in Austin are more than game. Known for its music scene that runs the gamut, you might say the “Live Music Capital of the World” is the perfect place for Invoke to come into its own.

In January, the quartet shared a bill with classical guitarist Thomas Echols at the University of Texas’ Cactus Café as part of the Classical Cactus concert series.

“We thought (Echols) was going to just be a classical-guitar player, and he thought we were just going to be a classical quartet,” said Montopoli. But in true Austin fashion, things weren’t quite what they seemed. Echols incorporated synthesizer, electric guitar and vocals into his set, while Invoke played their folky style.

“We’ll bring these works back to Austin to play here, too,” said Montopoli.

Montopoli says Invoke plans to stay in Austin even after completing the Young Professional String Quartet in Residence program at the Butler School in May 2018. As such, this is a critical year for the quartet to continue to make connections and set down roots in Austin.

Of course, there’s also the goal of continuing to write new music. They’ll be kicking off their second year of residency with the release of Furious Creek, their first album with vocals, which at the time of printing was slated for release in October. Among the tracks will be their own take on the classic 1854 American tune “Hard Times Come Again” by Stephen Foster.

When I ask Montopolis what he enjoys doing when not playing music, he’s initially hard-pressed for an answer, admitting his first response—collecting children’s instruments, such as toy keyboards and synthesizers—is still music related.

Given another moment, he has a quintessential Austin answer: “Mezcal and tacos.”