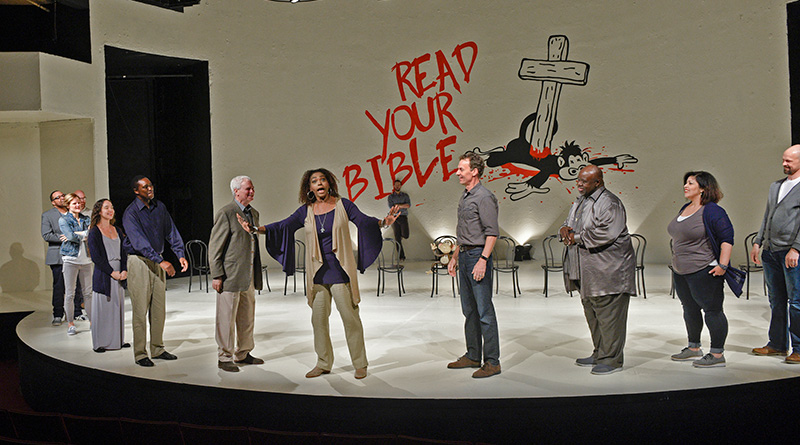 It Happened in Texas: A New Take on Inherit the Wind at DTC

Manuel Mendoza·
It Happened in TexasTheater
·May 19, 2017

Cast of DTC’s Inherit the Wind.
Photos by Karen Almond.

It’s difficult to imagine a time when all professional theater in the country emanated from New York. It might be even harder to believe this centralization of theatrical production first began to change in Dallas, Texas. But Margo Jones and her groundbreaking Theatre ’47 are no alternative fact. A couple of years after co-redirecting the premiere of Tennessee Williams’ The Glass Menagerie, Jones launched a theater in Fair Park dedicated to the new plays tumbling from writers’ heads in the creative zeal that followed World War II.

By the time she debuted the controversial drama Inherit the Wind in 1955 at her theater-in-the-round – another innovation – she had been joined only by the Alley Theatre in Houston and Arena Stage in Washington D.C. in what would grow into the American regional theater movement we can now taken for granted. Broadway had grown bland after initial postwar triumphs such as Death of a Salesman, and conformity was the social order of the day. There was no place for a woman producer in New York, especially a feisty one like Margo Jones.

“There’s something really stunning about Margo’s bravery and tenacity, her willingness to be provocative and the Dallas audience’s willingness, eagerness, to embrace this new found theater movement and a play that was so controversial,” says Kevin Moriarty, artistic director of the Dallas Theater Center, one of those regional theaters that Jones inspired, which is currently reviving Inherit the Wind through June 18. “There’s a certain Texas swagger, a confidence. ‘I’ll go my own way.’ ”

Written by Jerome Lawrence and Robert Edwin Lee, the play was based on the 1925 Scopes “Monkey” Trial in which a high school science instructor was convicted (though lightly sentenced) for supposedly teaching Darwin’s theory of evolution in violation of Tennessee law. The playwrights were intentionally unfaithful to the facts of the case because they wanted to deal with the larger issue of intellectual freedom. Rather than looking back at history, they were commenting on the current political climate that led to the Communist witch-hunts of Sen. Joseph McCarthy.

In directing Inherit the Wind, Moriarty shares a similar goal. What does the play have to say not just about our times, but also about any argument pitting belief against truth? “Are there some truths that cannot be questioned or are there some truths that people can’t even agree are true at all?” he asks. “What happens when facts can’t be shared or alternative facts are proposed. These are not facts at all but opinions with a moral certainty. I think that is deeply relevant, and it’s powerful in the play.”

It took a re-read for Moriarty to get there. When a member of his artistic staff proposed producing Inherit the Wind at the Theater Center, he thought no way, not that musty old thing. Having grown up Catholic in rural Indiana in the 1970s, he felt the questions it raised about the conflict between evolution and a literal reading of the Bible had been settled. Then he reached for the yellowed copy his parents had given him as a Christmas gift in high school and turned to Lawrence and Lee’s preface. It started, “Inherit the Wind is not history.” “They meant it to be a 1955 play, in their moment, and they say maybe the play even takes place tomorrow,” Moriarty recalls. He decided to read it as if it was something new he had just received in the mail. “And that changed everything. With those voices in my ear, I was shocked and delighted by how dangerous and contemporary and fast and at times funny and at times really heartbreakingly sad the play is. And I thought, oh my goodness, this isn’t an old play at all.”

Figuring out how to stage it was Moriarty’s next task. He came up with the idea of casting it in a highly contemporary style, without regard to matching the age or gender of the actors to their characters but without turning that strategy into a conceptual trick. The light bulb went off when the charismatic but aging Matthew Harrison Brady entered the action. Moriarty immediately thought of black company member Liz Mikel for the role. Brady is based on the populist three-time presidential loser William Jennings Bryan, the prosecutor in the Scopes case.

“She is beloved by our audience, she is a deeply skilled artist, she has a personal deep religious faith and she’s incredibly charismatic,” he says. “Suddenly I thought if a writer sent me this play today, I’d say, ‘You have to meet Liz cause she may very well be the right person to fashion this role around in your world premiere.’ ”

He thought of company member Kieran (Michael) Connolly, because of his intensity, for the part of Brady’s opponent, Henry Drummond, who was based on Scopes’ defense attorney, Clarence Darrow. Being white and gray-haired, Connolly is a more conventional choice. That led Moriarty to a kind of modified blind-casting approach. He cast some actors against type, such as black company member Akin Babatunde as Brady’s wife, Sarah, and others not, almost sidestepping the question of realism. “The actors jump gender, they jump race and they jump age very simply and very directly throughout the play,” he says.

Moriarty also realized that he needed to startle the audience from the beginning, the way he had been startled re-reading the play. So the set is neutral and abstracted, containing simple black chairs and white tables that are moved around to reconfigure the performance area. The actors wear current-day clothing appropriate to their gender even if they’re playing a member of opposite sex. It tells the audience that they’re watching a contemporary production and not an old courtroom drama, Moriarty says. He compares it to Our Town, where neither the soda fountain nor heaven is literally rendered.

After all, the issue of truth vs. belief raised by Inherit the Wind remains part of contemporary life and affects everyone, including people who were not depicted or accounted for when these classic plays were written, people who are members of the Theater Center’s acting company and audience. Why should they be left out now? “It’s not acceptable because the story of Inherit the Wind is as relevant for Latinos and African-Americans and women as it is for white folks,” Moriarty says.

“Why not just open up the canonical works of the past and let everyone in? There are two ways to look at canonical works of the past. One way is to say those plays were written by old white guys who are dead and therefore they speak to a uniquely white male experience and they no longer have meaning in our contemporary world. I do not share that argument. I’m much more conservative than that. I’m a classicist. As a classicist, I believe the texts that have lasted over the years, though they were written by white guys and have embedded in their writing cultural and historical and political assumptions of their times, they nonetheless have actual truths that meaningfully can speak to us today. But the problem is, if I make that argument, I need to make it not just in a program note, but I have to make that palpably alive on a stage.”