It Happened in Texas: Anna Pavlova 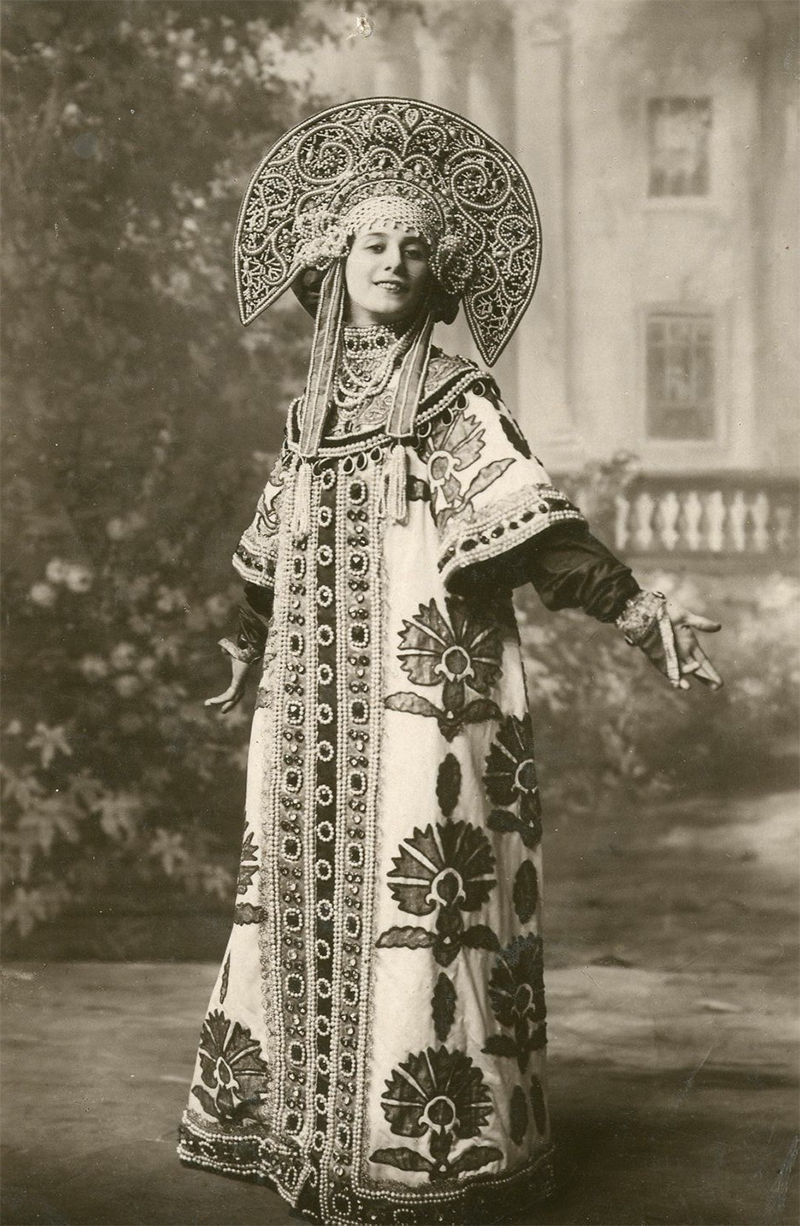 Pavlova in the Russian Dance. Photograph Foulsham and Banfield, 1910.

For many years now, upon arriving in a new city one of the first things I do is find out not where the best places to eat or visit are, but to research whether Serge Diaghilev’s Ballets Russes or Anna Pavlova’s company performed there. It has become a pilgrimage of exploration, with me more often than not finding my way to the site where a theater once stood. I am a dance and costume historian and I spend a lot of time traveling to new places. In many ways I feel akin to these early touring companies—although I don’t think my version of living out of a suitcase is as glamorous!

Earlier this year I arrived in Austin, Texas to undertake a fellowship with the Harry Ransom Center which actually has an incredible dance collection including costumes from the Ballets Russes! I knew from my research for the article ‘Nijinsky’s Week in Texas’ that the Ballets Russes had spent a week in Texas in 1916; but what about Anna Pavlova and her company? The following is what I found mostly pieced together from newspaper reviews and the accounts of one of Pavlova’s young dancers. This research is still ongoing; if anyone knows any further details, please let me know! 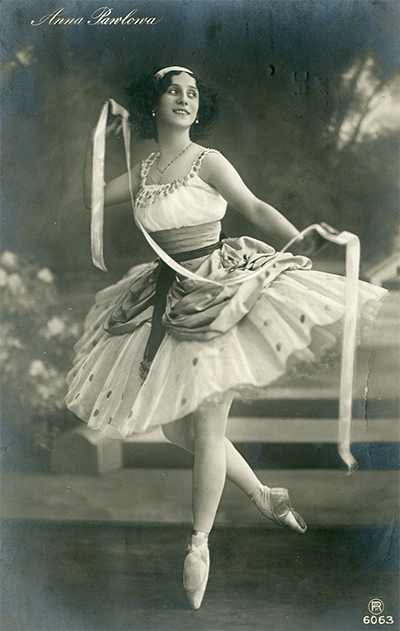 Despite having been born nearly 140 years ago, Pavlova remains a household name to this day—most famously for her solo The Dying Swan, and for the Antipodean meringue-and-cream dessert named after her.

Born in St Petersburg in 1881, she was accepted in the Imperial Ballet School at the age of 10 and graduated into the Imperial Ballet Company. She quickly rose through the ranks, eventually being promoted to Prima Ballerina in 1906. The ambitious Pavlova soon began to seek more than Imperial Russia could offer her. After several small European tours, she joined Serge Diaghilev’s Ballets Russes in 1909 as a principal dancer, performing with the young Vaslav Nijinsky. Dancing with the Ballets Russes accelerated Pavlova’s fame in Europe and she quickly set out on her own with her own small company.

Pavlova first toured to the USA in 1910 to widespread acclaim, and in 1911 she came to Texas; the Ballets Russes would not tour to the USA until 1916. Local Texas newspapers highlighted the anticipation of Pavlova’s visit, but also the difficulty of convincing an audience to see an artform they knew very little about.

The San Antonio Daily Express ran a long article prior to the company’s arrival, citing the performance as an “Optic Opera and Drama without words.” The article went on to explain that “This ‘optic opera,’ ‘drama without words,’ needs nothing but the mimetic art of these people to carry us to the land of dreams. The spoken word would but have interrupted the action which moved swiftly and sure to the climax with never a step or gesture too many, but such concentrated dramatic meaning as held us fascinated.”

The article tried to assure potential audiences that they would be able to understand the storyline even without words. The writer also stressed that this new artform was not risqué in any way; “There is not a trace of appeal to the sensual … only do we sense a beauty which restores to vigour that senile phrase, the poetry of motion.”

The press continued to publicize the exotic Russian company prior to its arrival in Texas, and it seems no aspect was without fascination; there were articles on the sets and costumes, and how all this was moved from city to city. The company performed the ballets Arabian Nights and a shortened version of Giselle in San Antonio, Galveston and Houston to rave reviews. The Daily Express reported that “It is safe to say that no person in San Antonio ever saw anything which ever in the remotest degree approached such marvellous dancing.” 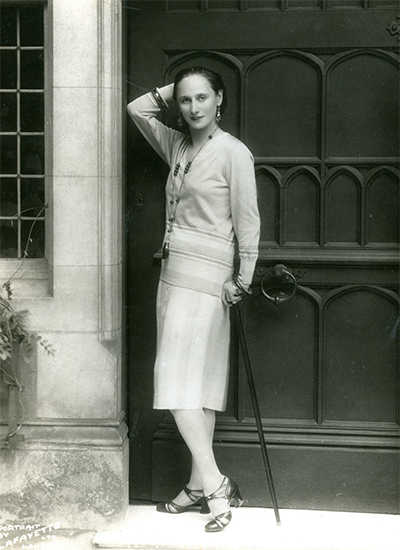 Pavlova at the door of her London home Ivy House. Photography by Lafayette, 1927.

A few weeks after Pavlova’s Texan debut, the Houston Post published an article from Harper’s Bazaar, entitled “Pavlova on Grace”. The article was said to be Pavlova’s message to American women regarding posture and movement.

Dear American Ladies, never stand with your weight evenly divided, your heels together, and your shoulders squared. That is, never stand in this position unless you wish to look like a German officer on parade. A woman’s body as she stands in a drawing-room, or pauses to speak to a friend, should always be relaxed…Always allow the weight of the body to rest more on one foot than on the other. Have the foot which is not bearing the weight lightly touching the ground; after all it is but balancing the body. Allow the entire side of the torso to relax with the foot and limb which is shirking the burden. That lets the hip and the shoulder down, throws up slightly and charmingly the hip and shoulder supporting the weight. The attitude is graceful, natural, altogether feminine.

I love this, and hope that they are in fact Pavlova’s words. Pavlova must have seemed very stylish, glamorous and exotic to the American audiences. How many Houston ladies took note of Pavlova’s advice?

The next time Pavlova and her company would perform in Texas was in February 1914, where they danced in Dallas as part of the Corn Exposition, as well as in Houston and San Antonio. Prior to this tour, a number of the regional papers had reproduced Pavlova’s illustrated guides to social dances including the one-step, Tango and waltz. These not only assisted with the popularization of social dancing, but provided a clever marketing tool for Pavlova and her company. The Daily Express reported that “People say that Pavlowa’s  sensational tour of this country three seasons ago not only aroused America to a keen appreciation of dancing as high art, but also set all sorts of folks dancing themselves.” Pavlova had inspired a nation to dance.

Pavlova was traveling through Germany when war was declared with Russia in  1914; as a Russian national, she was]arrested and faced possible internment. Upon her release she made her way to London and eventually back to the United States with her company.

For the next two years, Pavlova and her company of approximately 22 dancers performed a whirlwind of one-night stands across Canada and the United States. She would not actually return to Europe until 1919. In May 1915 Pavlova, “The most famous dancer the world has ever known,” performed at the Grand Theatre, El Paso. The day before the performance the local newspaper ran a long article on the famed dancer. It included her daily schedule in which it was reported that she woke at 9am and performed exercises before an open window, and went to bed at 1am.

In early 1916 Pavlova and her company, this time in conjunction with the Boston Grand Opera, were back performing at the Majestic Theatre in Houston, The Coliseum in Dallas and The Texas Grand Theatre in El Paso. The billing offered a mix of opera and ballet works including Madame Butterfly, La Bohème, Snowflakes, and Coppelia. As well as the articles that were written about Pavlova and her company, the dancer’s name frequently made its way into advertising endorsements including the Angelus Player-Piano, which Pavlova allegedly declared “marvellous, almost beyond belief.” A few days before the performance in El Paso, the local paper ran a guide listing “Opera Pronunciations. Things Worth Knowing” which included Pavlova is “pronounced Pav-lov-a” and her partner Volinine “pronounced Vol-e-neen.” 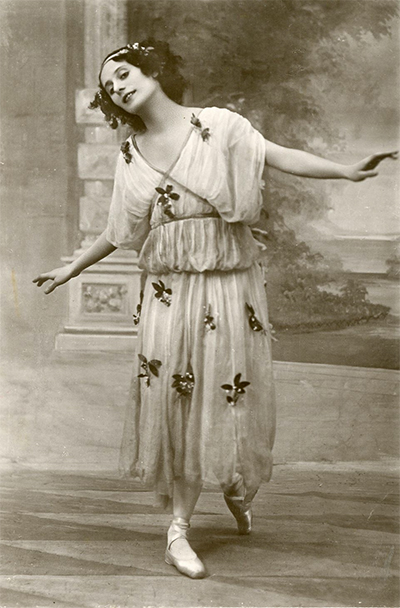 Across the early 1920s Pavlova and her company made yearly tours to the USA. It is unclear at this stage if the company toured to Texas in 1921, but in February 1922 they were back with their most extensive tour of Texas to date. This tour included El Paso, Fort Worth, Dallas, Waco, Austin and Galveston.

Two years later the famed dancer was back again for a seven-city tour, and what would ultimately be the company’s last tour to include Texas. This final tour included: El Paso, Dallas, Fort Worth, Austin, San Antonio, Houston, and Beaumont. The Sunday before Pavlova’s performance in Houston, the Houston Post ran an article by reporter Lillian Macdonald, in which she professed that “On Saturday Anna Pavlowa, most perfect exponent of Russian dancing, will be at the Auditorium.” Macdonald went on to state that “Whether she interprets by toe dancing the great Ballet Russe toe dancing, or whether she glides, an epitome of grace, through the wonderfully ornate dances created by her art, she is always something to remember as very near perfection in her line.”

This “near perfection” was to be the last time that Texas would see Pavlova dance. Her legacy, however, would live on in the dancers young and old whom she inspired, and the dancing schools that sprang up in her wake. Even the elaborate “Texas Dip” performed by debutantes to this day is thought to perhaps have been inspired by Pavlova’s final pose in the famous solo, The Dying Swan.