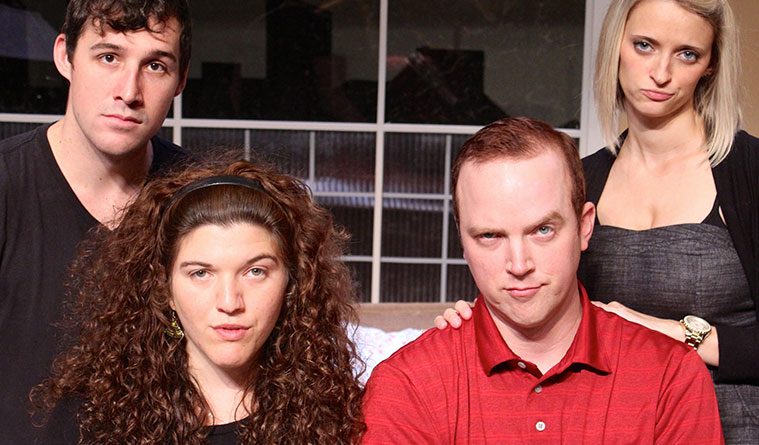 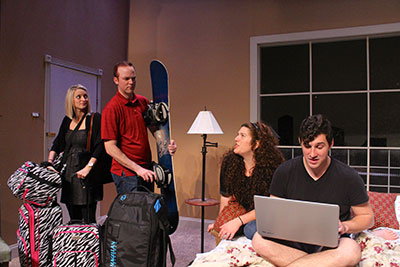 A “shidach,” Yiddish for “a date or a match,” perfectly describes the most exciting 2015 Houston co-production to date: Black Lab Theatre and Stages Repertory Theatres’ regional premiere of Bad Jews, presented at the Evelyn Rubenstein Jewish Community Center of Houston, April 18 – May 3.

A 2013 Off-Broadway hit, Joshua Harmon’s Bad Jews is a ferocious comedy about faith, tradition and family. Following their grandfather’s funeral, three cousins are forced into a kind of hellish slumber party, trapped in a NYC apartment overnight. To make matters worse, Daphna, the “super Jew,” has an agenda: as the most devout member of the family’s third generation, she feels entitled to grandpa’s precious Chai necklace.  After all, the eldest cousin Liam is a horrible Jew — I mean, just look at his shiska girlfriend, Melody! This family heirloom could not possibly hold significant meaning for him; while for Daphna, it means the world. Liam, however, vehemently disagrees. A brawl ensues, leaving Melody and Jonah, Liam’s younger brother, struggling to keep the peace.

Black Lab founder and artistic director Jordan Jaffe first encountered Bad Jews after returning from a 10-day birthright trip to Israel, a popular spiritual journey among Jewish young adults. “I applied for the performance rights immediately. I was just so moved.  It really captures the millennial American Jewish experience like no other work of art I have ever read or seen,” Jaffe explains. Founded in 2011, Black Lab Theatre is committed to producing new, socially conscious dramas, so  Bad Jews fit the bill. “In transitioning from adolescence to adulthood, we are all faced with choices about what traditions we want to keep from our upbringing and pass on to our own children, and what traditions we want to leave behind,” says Jaffe. “This play is about that fork in the road.” 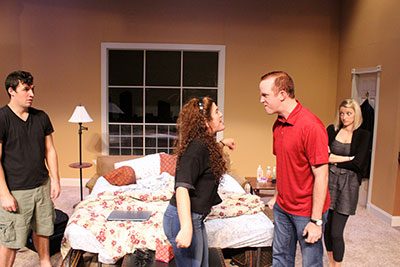 Meanwhile, Marilyn Hassid,  assistant executive director, Arts & Culture at the JCC, and Stages’ artistic director Kenn McLaughlin were teaming up to co-produce a project, bringing theater back to the JCC after a 20 year hiatus. “We wanted something that spoke to the Jewish experience, but also had universal themes and if we could get an eye popping title, all the better,” says McLaughlin. “With Bad Jews we got it all!”

However, they soon discovered that Jaffe had beaten them to the punch, that Black Lab had secured license. “Rather than produce a different play with the JCC, I called Jordan up and asked him if he wanted to join the party. I’m so glad I did. Jordan is the perfect director for this piece, it’s is so close to his own personal experience. I am so impressed with what he is doing and what he brings to the table.”

The youngest of the Bad Jews’ producers, Jaffe has a deep personal connection to Houston’s JCC, an organization that he considers to be his cultural home. “I spent so much of my childhood the JCC,” he says. “It’s kind of unbelievable to think there was some total goofball kid running around the halls 20 years ago and now he’s co-producing and directing a play here.”

Indeed, two decades later (and perhaps just as youthfully energetic), Jaffe is part of the new generation of community leaders, especially in Houston Theater. Forging the way for unprecedented co-productions, Jaffe partnered the Asia Society Texas Center to present the regional premiere of Chinglish, by Henry David Hwang, in Spring 2013. This year he’s working with the JCC.

As a co-production, audiences should expect the highest level of artistic excellence from Bad Jews. Pooling their resources and talents, Black Lab and Stages in association with the JCC have a created a logical and effective partnership for this project. “We have so much more on the table as three organizations working together,” says McLaughlin.

Although Bad Jews is a play about Jewish Americans, this is a play for people of all ages, faiths and heritages. “The true strength of this work comes from the broader relate-ability of the challenge of family and identity,” explains Jaffe. “As a country of immigrants in America, we are constantly challenged by the conflict between assimilation and maintaining unique cultural identities.  Bad Jews highlights this struggle in an incredibly effective and moving way.”

McLaughlin, who is of a different generation and faith than Jaffe, agrees: “I think the issue the script wrestles with is how your past can influence your actions today, and how each successive generation takes one step further away from their core heritage or the core values of that heritage. Whether that makes them bad or not is up for discussion.”