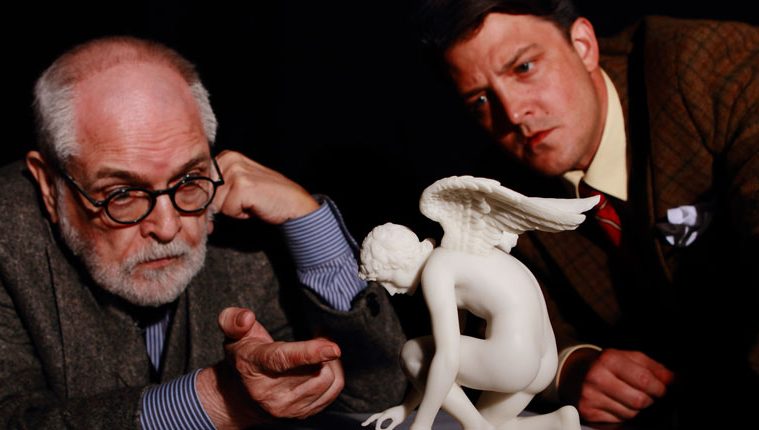 Jac Of All Trades

FREUD’S LAST SESSION centers on legendary psychoanalyst Dr. Sigmund Freud, who invites a young, little-known professor, C.S. Lewis, to his home in London. Lewis, expecting to be called on the carpet for satirizing Freud in a recent book, soon realizes Freud has a much more significant agenda. On the day England enters World War II, Freud and Lewis clash on the existence of God, love, sex and the meaning of life — only two weeks before Freud chooses to take his own.

The two-character play by Mark St. Germain created buzz when it premiered off-Broadway a couple of years ago, running for 775 regular performances before checking out just this last July. Now, it comes to life again in a new local production at Theatre Three in Dallas. And stepping into the lead role is Jac Alder, who has been running the program at the Uptown theater for some 50 years. In his mid-seventies, Alder is just a few years younger than Sigmund Freud was when he died in 1939.

Alder was trained as a musician and dancer from childhood, and completed his architectural degree at Oklahoma University. Following graduation he was commissioned in the U.S. Army and, with Joanna Albus, founded a soldier-operated theater that staged musicals, comedies and variety acts. After active duty, he came to Dallas and auditioned for Norma Young, who was to become his wife. They founded Theatre Three in 1961. Alder has served continuously since as designer, director, administrator, author and actor. Honoring his uniquely long service as a producer of professional theater, he has been awarded lifetime membership in Actors Equity Association, a lifetime achievement award from the Southwest Theatre Association, recognition for Arts Leadership from Dallas Historical Society, and numerous critical awards for direction.

Intrigued to discover Alder taking the lead in Freud’s Last Session, A+C caught up with Alder to do some analysis of their own, and get his insights into this compelling drama.

A+C:  What made you choose Freud’s Last Session?

JAC ALDER: Freud’s Last Session attracted my attention because of its characters. It also interested me because I’m of an age to respond to World War II, to recall the horror of Nazi persecution of the Jews (which caused Freud to flee to London) and the powerful dynamics of the intellectual turmoil of those times. Good drama is all about conflicts, and the playwright has skillfully explored them all. It’s exciting writing with extraordinary skills that introduce humor to play against the horrors.

JA:  They were contemporaries only in the sense of them both being alive at the same time. At the time of the play Freud is 83 — a day just two weeks before his death. Lewis is 40, many years Freud’s junior, but an established scholar and writer. Their conflict includes a father-son dynamic that is another rich ingredient of the work.

A+C:  Is it possible Freud felt a connection to Lewis?

JA:  I think what Freud felt most toward Lewis was deep irritation that so stunning an intellectual as Lewis, one so gifted at analytic reasoning, could turn his back on atheism and embrace a very standard version of Christianity.

A+C:  What surprised you most about the script?

JA:  The fascinating power of the unresolved, and the humor inherent in these conflicts. A world view of faith based on revelation cannot win over belief based on science. Nor can win or loss be established the other way around.

A+C:  What is the significance of the date in history they “met”?

JA:  September 3, 1939 is the very day of The King’s Speech, taking England to war against the Nazis. It also is two weeks before Freud’s assisted suicide. He chose to escape the excruciating cancer in his jaw that caused thirty unsuccessful surgeries. This date was a nexus of personal, psychological and devastating political pain.

A+C:  Would you say this play shows another side of Freud?

JA:  Freud was a towering intellectual, often reviled, but mission-driven and self-confident. The play reveals tenderness toward his wife and daughters, and grief over the loss of a very young grandson, often overlooked when people evaluate him as a combative intellectual.

A+C:  So Freud’s Last Session is based on the playwright’s extrapolation of what if?

JA:  It’s part of the wisdom of the playwright that WHAT IF becomes easy because both Freud and C.S. Lewis wrote so much on the subjects discussed in the play. So IF they got together, and stayed consistent, we pretty much can figure what they’d say. The dramatic task then becomes ordering the events, editing the polemics they wrote into dialogue, and letting it rip.

A+C:  Is it safe to say Freud is distraught or despondent when the two meet?

JA:  Distraught, certainly, because of the onset of the war. Despondent underneath, but there’s still such fight in him, such conviction that he is proud to “not go gently into that good night.” That, to me, suggests a kind of triumph. His wanting to engage Lewis — despite not knowing if there’s going to be a tomorrow — demonstrates remarkable courage.

A+C:  Did you seek to emulate Freud’s bearing?

JA:  We invented mannerisms to provide subtext, the way actors do.